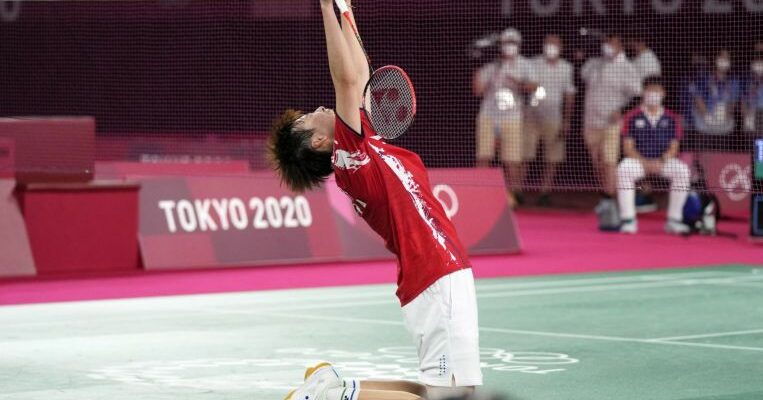 Taiwan had bagged its first-ever Olympic badminton medal the previous night with gold in the men’s doubles competition.

Tai scuffed a shot into the net to end a marathon final rally, and Chen fell to her knees and roared to the rafters.

Sindhu, the world champion and 2016 Rio Games silver medallist, said she had to focus to put the disappointment of losing to Tai in the semi-finals behind her.

She said: “I had to had close all my emotions for this one match and just give my all.

Kevin Cordon’s fairytale run in the Tokyo Olympics men’s singles came to an end earlier on Sunday when the Guatemalan was knocked out 21-18 21-11 by world number two Viktor Axelsen of Denmark.

China’s Chen Long, the champion from the 2016 Rio Games, also advanced to the final after beating Indonesia’s Anthony Sinisuka Ginting 21-16, 21-11.

While Axelsen was one of the favourites for gold coming into the Games, the 34-year-old Cordon is ranked 59th in the world and has won plaudits for smashing his way to a surprise semi-final spot.

Axelsen said playing such an underdog meant the pressure was all on him.

“Everybody who has a little bit of badminton knowledge could see that this was really tense and not that pretty of a game,” said Axelsen.

“I don’t think you can find a match where there was more pressure on me than this one.

Steen Pedersen, a former coach of the Danish national team, said Cordon had faced an entirely different level of player in Axelsen.

He said: “Kevin has done extremely well but he was up against a different level of player.

Chen said he hoped to bring his best badminton to Monday’s final.

“I hope to be able to express the best of myself tomorrow,” said Chen.

“There’s no going back. I need to make sure I take each opportunity I can and do my best.”

While Ginting was disappointed not to be going for gold, he was determined not to come away with nothing.

“It is what it is, there will be a winner and loser. But I have to move on as soon as possible because tomorrow I still have one more medal, the last medal,” said Ginting, who walked off the court to resounding cheers from team mates at Musashino Forest Sport Plaza.