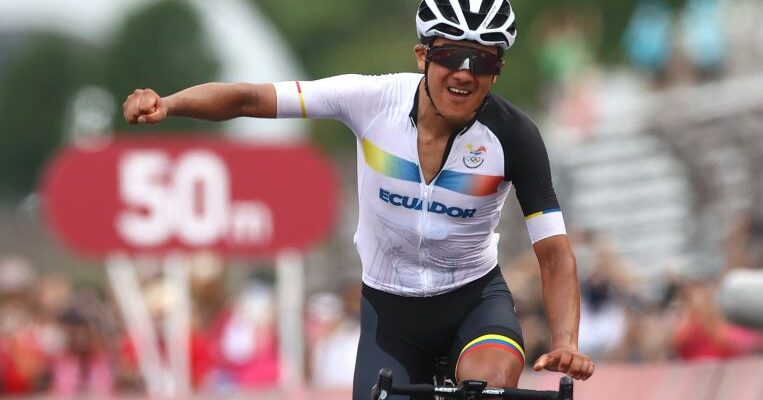 Carapaz was joined on a late attack by American Brandon McNulty but with the chasing pack reeling them in he went alone on the racing circuit finish and soloed to victory.

Carapaz is only the second Ecuadorean to win an Olympic gold after Jefferson Perez in the 20km walk at Atlanta 1996.

The star-studded peloton rolled out of Tokyo’s Musashinonomori Park with the unusual sight – for these pandemic-delayed Games – of tens of thousands of locals lining the roads, masked and with many toting umbrellas as early temperatures soared to 32 deg C.

The entire route accumulated a staggering 4,865 metres of climbing – more demanding than the major mountain stages of the 2021 Tour de France.

After Friday’s opening ceremony at the 68,000-capacity Olympic Stadium devoid of fans, it was a welcome sight to see Japanese spectators line the course around Mount Fuji – the highest point in Japan at an altitude of 3,776 metres (12,388 feet).

As the peloton sped out of the greater Tokyo conurbation, lush green forests replacing the concrete jungle, locals waved, cheered and dutifully photo-snapped as if it might have been a Grand Tour stage in non-coronavirus times.

Britain’s Geraint Thomas, the 2018 Tour de France champion who sustained a dislocated shoulder on this year’s edition before miraculously getting back on the saddle and finishing the race, suffered an early crash and eventually withdrew.

South Africa’s Nic Dlamini, who this month became the first black South African to race the Tour de France, led a lead group of five riders up and over the Kagosaka Pass and then dove into a long descent before the climb to Fuji Sanroku (14.3km at 6 percent).

Riders hit speeds of up to 85 kilometres per hour (53 miles per hour) coming down from the second of the three major climbs.

Flashing by the pitlanes of the Fuji International Speedway racing circuit for a first time, the breakaway was finally reeled in with 40km of the race remaining.

It heralded the start of a cat-and-mouse game up to and over the Mikuni Pass, its 10km climb averaging 10.6 percent with some sections at more than 20 percent.

The peloton was quick to split at the start of the ascent, the Belgians and Slovenians taking up the pace before Pogacar further upped the ante.

It was the first of many surges, before Carapaz and Brandon McNulty bolted, the Ecuadoran former Giro d’Italia winner eventually dropping the American with 6km to race.

Van Aert pushed in pursuit, but nothing could stop Team Ineos rider Carapaz, who slapped his handlebars in triumph as he crossed for an impressive solo win.