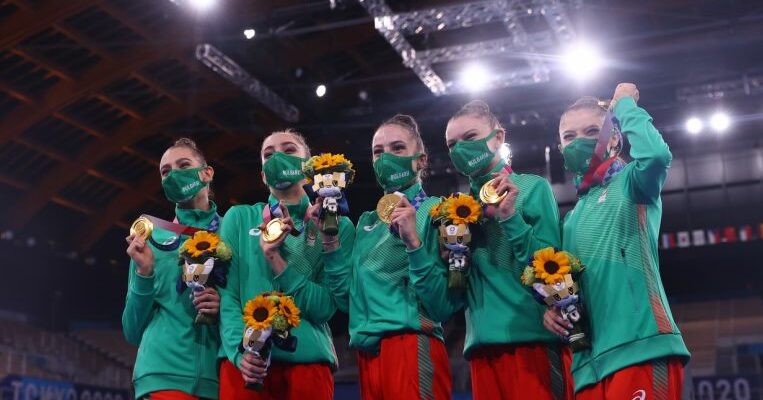 TOKYO (REUTERS) – Bulgaria’s perfect co-ordination helped them bag gold in the rhythmic gymnastics group event at the Tokyo Olympics on Sunday (Aug 8), ending a Russian winning streak that stretched back to the Sydney Games in 2000.

In the two rotations – five balls; three hoops and two clubs – Bulgaria scored 92.100 points, weighted towards the first round.

The Russian Olympic Committee (ROC) scored 90.700 points overall, taking silver, while Italy won the bronze with 87.700 points. Russian athletes are competing under the ROC flag in Tokyo as part of sanctions for doping scandals.

Bulgaria’s five women tapped, spun and juggled five balls between them, tallying 47.550 points to a Bulgarian folk music tune arranged by Stoyan Yankulov, one of the country’s most popular percussionists.

The sport was added to the Olympic programme as an individual event in 1984, with the first group gold awarded at Atlanta in 1996, when Spain took the title.

Since then Russian teams have dominated but on Sunday they came up second best.

It was the second upset in a row for Russian rhythmic gymnasts after Israel’s Linoy Ashram finished ahead of three-time individual all-around world champion Dina Averina to win gold on Saturday by 0.150 points.

“Of course there is joy but there is also sadness,” she said.

“We feel like we fought for our country, for our team, for our coach. We did what we could.”