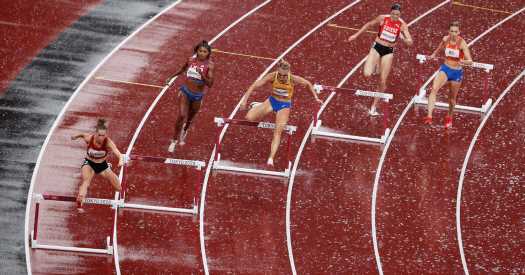 Anna Cockrell’s brother, Ross, is a cornerback for the team. On Monday, the Buccaneers took a break from training to watch her advance to the 400-meter hurdle finals. 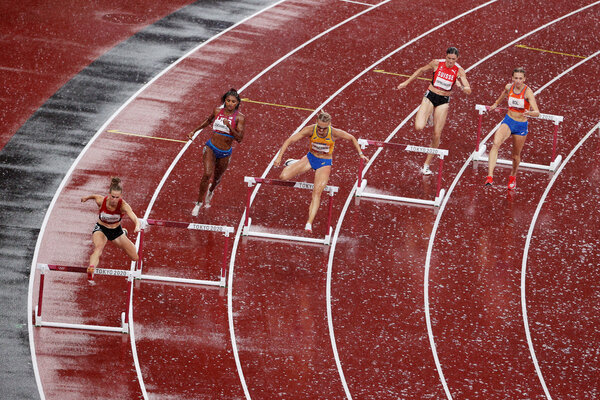 On Monday, members of the Tampa Bay Buccaneers took a break from training camp and gathered to watch some game tape. But it wasn’t just any game they were watching: It was the Tokyo 2020 Games, specifically the women’s 400-meter hurdles, an event featuring Anna Cockrell, whose brother, Ross Cockrell, is a cornerback on the team.

Ross Cockrell, whose chest rapidly rose and fell under his Buccaneers sweatshirt, sat quietly in his red mask as he watched his sister compete on the world stage in Tokyo. With just seconds left in the race, he leaned forward in his seat, concentrating intensely, then pumped his fist when his sister crossed the finish line in the rain, clocking in at 54.17 seconds, to advance to the finals.

“Y’all got me crying in the village dining hall,” Anna Cockrell tweeted in all caps, sharing the video of her brother and his teammates cheering her on from their training camp in Florida.

Ross Cockrell said that being able to watch his sister compete in the Olympics was “amazing,” and even credited his performance at practice, in which he had intercepted three passes, to Anna.

“To see her go out there and perform as well as she did in adverse weather and adverse situations, and then go out to practice and do my thing, I was just feeling the magic she had,” Ross Cockrell said. “I think she passed it along to me.”

Tokyo is Anna Cockrell’s Olympic debut. In an interview following the U.S. Olympic trials in June, where she finished third and earned her ticket to Tokyo, she talked about her struggles with mental health.

“In 2019 I was super depressed, I didn’t want to be here anymore,” Cockrell, who graduated from the University of Southern California with her master’s in May, said between sobs. “To be standing here today as an Olympian is more than I can take.”

Anna Cockrell, 23, opened up about experiencing depression, which she has battled since her sophomore year of high school, in a commencement speech she gave at her undergraduate ceremony from U.S.C. in May 2019, describing how her perfectionism led her to suffer in silence to avoid seeming weak or having to ask for help. After sustaining an injury at a competition that spring that she feared might end her season, she finally began to let others in, she said.

Leading up to her first race in Tokyo, Cockrell also published a letter to her 21-year-old self in the Players’ Tribune, ending it with words of affirmation to herself and to others who might be dealing with mental health issues.

“No matter what happens out here, I am important, I am worthy, I am valued and I matter,” Cockrell wrote. “And so do you.”