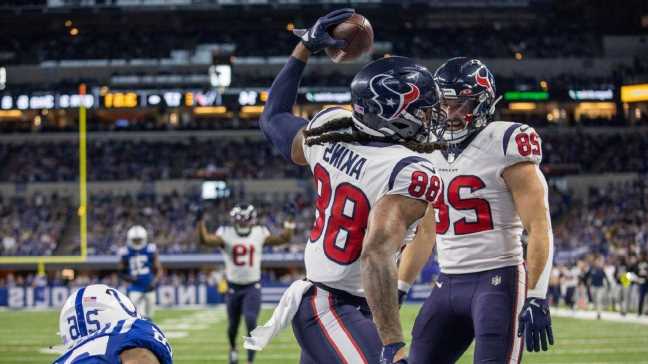 Fourth-and-20: On Sunday, that down and distance not only determined which team receives the No. 1 pick in the NFL draft but also decided the largest survivor pool in Las Vegas, worth millions of dollars.

Out of 6,133 entries in Circa Survivor, only three were still active entering Week 18, each with a shot at the $6.113 million first prize in the annual contest put on by Las Vegas resort and casino Circa.

Only two would survive.

Entries titled “Browna” and “Jed” finished in a tie for first place, capping 20 consecutive straight-up winners with the Jacksonville Jaguars over the Tennessee Titans and the Seattle Seahawks over the Los Angeles Rams, respectively. The other remaining contestant, entry “The Enemy Within” went with the Indianapolis Colts over the Houston Texans.

With a loss, the underdog Texans would have secured the first pick in the NFL draft, but they played themselves into a back-and-forth game against the Colts. Trailing 31-24 with 3:29 to play, the Texans mounted a long drive down to the Colts’ 18-yard line. Houston quarterback Davis Mills was sacked on a third down for a loss of 10 yards. The Texans were faced with a fourth-and-20 from Indianapolis’ 28-yard line.

Mills eluded pressure and heaved a desperation pass to the front of the end zone that looked destined to be intercepted by Colts defensive back Rodney Thomas. The ball slipped through a leaping Thomas’ hands and fell right into the arms of Texans tight end Jordan Akins for a touchdown. Houston elected to go for two, and Mills again connected with Akins, lifting the Texans to a 32-31 victory and the No. 2 pick behind the Chicago Bears in April’s draft.

“The Enemy from Within,” aka Mike Barth of Houston, was eliminated.

Barth appeared on the Vegas Stats and Information Network later in the day and was in good spirits, saying he was “well hedged.”

“There was certainly more out there to win,” Barth said during the interview. “It was a phenomenal event for me. With the hedge, what I’ll get is wonderful.”

Vegas Stats and Information Network reported that three finalists agreed to partially chop the $6.311 million first prize but would not reveal the details.

Barth said he was close to taking the Minnesota Vikings with his final pick but was concerned that, with their playoff spot sealed, they’d pull the starters early. The Vikings would go on to beat the Chicago Bears 29-13.

“Do I regret taking the Colts? Of course,” Barth lamented.

• Cowboys -3 at Buccaneers: Tampa Bay quarterback Tom Brady is 7-0 straight up against the Cowboys in his career, but this could be the first time Brady has ever been an underdog to Dallas. Brady is 7-3 as a playoff underdog.

“I was thinking a little lower, under the three,” Adam Pullen, assistant director of trading for Caesars Sportsbook, said of the opening line. “Obviously, the Brady angle is going to get played quite a bit, Brady as a home underdog in a playoff game.”

• Chargers -3 at Jaguars: “I was thinking it should be closer to pick, maybe the Chargers a small favorite,” Pullen said of the opening line.

“I could see this getting bet up quickly,” Mucklow said. “When the team came up with that, I thought there was a zero missing.”

• Giants at Vikings -3: “I think a lot of people are going to be giving the Giants a fair shake going into Minnesota,” Pullen said.

• Ravens at Bengals -6: Pullen called the opening line of Cincinnati -6 a “middle-ground number” and said he believes the point spread reflects a slightly better than 50% chance that Ravens quarterback Lamar Jackson plays. ESPN’s Adam Schefter reported last week that Jackson, who has been sidelined for over a month because of a sprained knee, has a “strong chance” at playing in the playoffs.

Cincinnati was a 9.5-point favorite over the Ravens without Jackson in Sunday’s 27-16 win over Baltimore. Pullen expects the line would get back into the range if Jackson were to be ruled out.

• The line on the Sunday prime-time game between the Detroit Lions and Green Bay Packers moved erratically leading up to kickoff. The Packers had been 4.5-point favorites, before the Lions were eliminated from playoff contention with the Seahawks’ overtime win over the Rams.

The line grew to as much as Green Bay -6, but that’s when the big, sharp money showed up on the underdog Lions. Caesars reported taking a $200,000 bet on Detroit +6, and the line across the betting market would drop back to Packers -4 by kickoff.

“The sharps were waiting until near kickoff, when they thought the public was going to drive the price up, especially after the Seattle win,” Pullen said. “They were ready and seemed like they were just waiting for that top number, and that’s when they decided to pounce. It makes total sense. They’re sharp for a reason.”

• The Dolphins, who closed as 4-point favorites over the Jets, covered the spread on the final play of the game when New York botched a last-ditch multilateral attempt that resulted in a Miami safety, making the final score 11-6.

• Bills running back Nyheim Hines returned two kickoffs for touchdowns in Buffalo’s win over the Patriots. At sportsbook PointsBet, Hines was 80-1 to score two-plus touchdowns in the game. The sportsbook reported taking one $5 bet on Hines to score multiple touchdowns at 80-1.

• On Sept. 10, a bettor in New York with DraftKings placed a $50 eight-leg parlay on each of the NFL division winners. DraftKings offered boosted odds of approximately 182-1 on the bet for a potential payout of $91,068.67. The bet was active entering Saturday’s Titans-Jaguars game, which would decide the AFC South. The bettor had correctly picked the Eagles, Vikings, Buccaneers and 49ers in the NFC, and the Bills, Bengals, Chiefs and Titans in the AFC. The Jaguars returned a fumble 37 yards for a winning touchdown with 2:51 to play to help Jacksonville capture the division title and foil the bettor’s parlay.

• The NFL announced last week that the AFC Championship Game will be played on a neutral site if the Bills and Kansas City Chiefs reach the conference final, because the teams would have played an uneven amount of games, with Buffalo’s Week 17 game against Cincinnati being canceled.

PointsBet head of training Kevin Lawler said the neutral field for a potential Chiefs-Bills matchup in the AFC Championship Game would have a “massive impact on the probabilities.” Lawler estimated if the game were played in Buffalo the Bills would be 2-point favorites, while in Kansas City, the Chiefs would be 3-point favorites. He said a game on a neutral field would be close to pick ’em.