Of all the left-field dramas rugby league has managed to turn up over the years – some comical, some deadly serious – the game continues to plough fresh ground.

And so, on Wednesday, the Gold Coast Titans were fielding phone calls about how they planned to deal with a newly minted anti-vaxxer in their squad. It was more of a human resources concern than a football issue but one that posed legitimate health questions for fellow Titans players, employees and their families.

By then, the story had already been feasted on by news websites, morning television and talkback radio. Via a series of questions on Instagram, Shanelle Cartwright, the wife of Titans forward Bryce Cartwright, had told the world of their refusal to vaccinate any of their children. 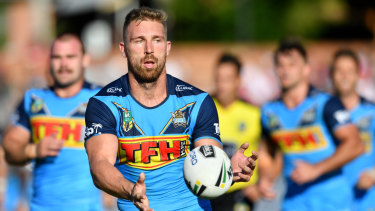 The couple have a toddler Koa, 13 months, and Shanelle is due within a week to give birth to the couple's second child. Neither have or will be vaccinated, with Shanelle saying she had convinced a reluctant Bryce to support the deeply controversial stance, which flies in the face of all respected medical evidence.

On Wednesday, Shanelle replied to a large number of critics on social media, saying she wasn't "anti-vax" but was making a choice for her own family. She also posted a number of messages of support.

While the Cartwrights are free to raise their family however they see fit, there were obvious queries for Bryce's employer as to how it may impact the working of the club on certain occasions.

NRL teams aren't kindergartens but it's not unusual to see the partners and children of players in and around the scene. They might be at a corporate event, community functions or in the wider dressing room environment after the game.

The presence of non-vaccinated children could be of concern to other players and their families, especially those with infants or toddlers. While the Cartwrights may be content with their choices, what about the rest of the players and families?

The Australian Medical Association was quick to warn that certain social media influencers posed 'unnecessary dangers to public health'. In Queensland, non-vaccinated children can be turned away from childcare centres and pre-school programs. Shanelle said she would rather home school than vaccinate.

Any notion of a 'baby ban' at the Titans was quickly shot down on Wednesday, with the club saying they had no plans to exclude the wider Cartwright clan from the greater team environment. Equally, should there be any concerns from other staff members of players, it would be taken seriously given the heightened health risks.

The Titans have enjoyed a welcome off-season free of serious drama, which can't be said for a number of other clubs that have had to sack players, or have them facing serious charges in court.

They need Cartwright to get his career back on track and his mind on the job after a disappointing move north from Penrith. If he can rediscover his form, all the better.