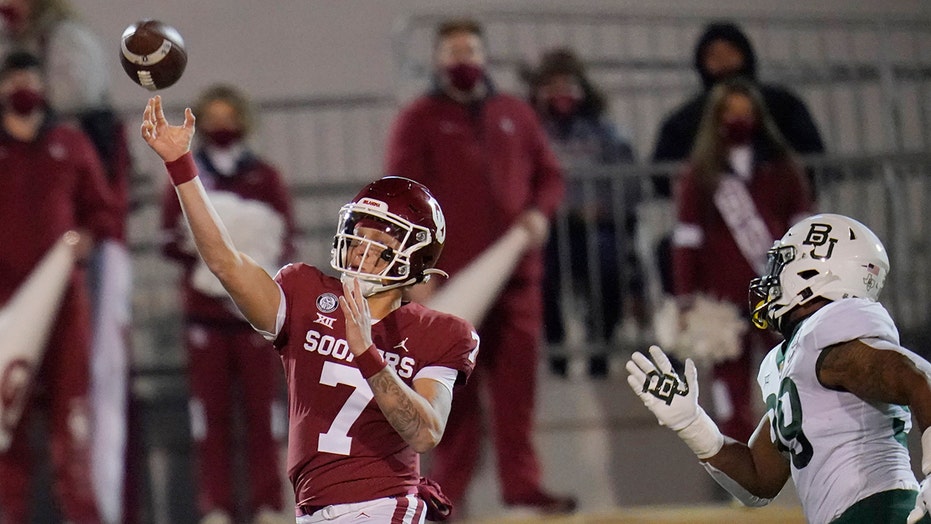 Spencer Rattler threw two touchdown passes, and No. 13 Oklahoma defeated Baylor 27-14 on Saturday night to earn a spot in the Big 12 Championship Game.

The Sooners (7-2, 6-2 Big 12, No. 11 CFP) lost their first two conference games before winning six straight to earn the right to play Iowa State in the title game, which is scheduled for Dec. 19.

Rhamondre Stevenson ran for a touchdown and had 98 yards from scrimmage for Oklahoma. The Sooners were limited to just 269 yards.

The Sooners held Baylor (2-6, 2-6) to 288 yards, including 25 yards rushing. They did it without several key players, including linebacker Nik Bonitto, defensive back Brendan Radley-Hiles and safety Pat Fields.

Baylor's Charlie Brewer completed 30 of 56 passes for 263 yards and a touchdown, and he ran for another score.

The Sooners finally broke through on Stevenson’s 3-yard touchdown run with 1:04 left in the first half. The Sooners led 10-0 at halftime, despite being limited to 99 total yards.

Baylor kicker John Mayers, who made the game-winning field goal against Kansas State the previous week, missed two field goals in the first half. The Bears gained just 110 yards before the break. It was the first time since 2015 that the Sooners held a Big 12 opponent scoreless in a first half.

Baylor finally scored in the third quarter when Brewer found Tyquan Thornton for a 25-yard score on fourth down after a penalty against the Sooners gave the Bears an extra chance.

Oklahoma pushed the lead to 20-7 on a 50-yard field goal by Gabe Brkic early in the fourth quarter, and Rattler threw an 8-yard touchdown pass to Brayden Willis later in the period to put the Sooners in control.

Brewer scored a short rushing touchdown with 59 seconds remaining to close out the scoring.

Baylor: The Bears couldn't handle Oklahoma's defensive line, and Brewer couldn't get anything going in the air or on the ground. The defense did more than its share against an Oklahoma offense that had averaged 55 points in its previous three games.

Oklahoma: This was the first time in a while that Rattler struggled to get going, and Stevenson was slowed down for the first time in four games since he returned from suspension. Oklahoma remained patient and did enough to gain control in the second half.