Australia's two highest ranked players, Alex de Minaur and Nick Kyrgios, have been knocked out in the second round of the ATP Masters 1000 event at Indian Wells.

Kyrgios was an overwhelming favourite to advance from his meeting with Philipp Kohlschreiber but the German veteran proved too consistent as he broke the 31st seed once in each set to prevail 6-4 6-4 in one hour and 14 minutes. 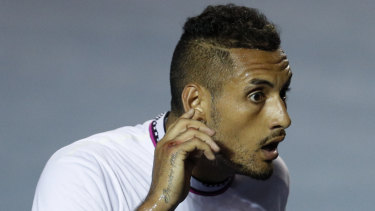 Nick Kyrgios struggled to get back to his best after winning in Mexico.Credit:AP

A keenly-fought opening set went the way of Kohlschreiber after a slip by Kyrgios, who had kept his emotions in check, cost him a chance to break serve in the 10th game.

The incident resulted in Kyrgios trashing his racquet in frustration as he complained to his team about wearing "sample" shoes, which he changed out of at the end of the set and threw into the crowd.

Kohlschreiber broke to lead 3-2 in the second set at which point Kyrgios, already one of the fastest player on tour, proceeded to increase his pace of play with one service game taking just 38 seconds.

De Minaur, who like Kyrgios had a first-round bye, was upset by world No.217 Marcos Giron earlier on Saturday.

De Minaur scorched through the first set but American qualifier Giron swung the momentum his way against the 23-seeded Australian to prevail 1-6 6-4 6-2.

Others to reach the round of 32 were Gilles Simon, Jan-Lennard Struff, Lazlo Djere and lucky loser Miomir Kecmanovic.