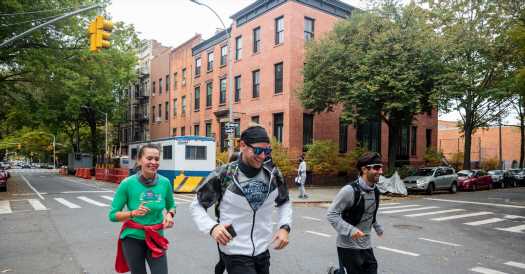 The New York City Marathon will no longer be the only game in town.

City officials have given the green light for a new race, the Brooklyn Marathon, to take place April 24, giving runners another 26.2-mile race on the streets of the city besides the New York City Marathon, the world’s largest, in November.

The addition of the new road race, which will wind from north to south in Brooklyn and dip into parks, is a significant statement of confidence in marathon road racing. In recent years, registrations for all but the biggest races have begun to level off or even shrink after years of growth. Race organizers, however, have long believed that New York can support another major race.

While other marathons do take place in the five boroughs, they mostly involve circling a city park over and over. The initial versions of the Brooklyn Marathon, which first took place in 2011, required more than eight laps around Prospect Park in Brooklyn.

The new course will begin near McCarren Park and follow the East River waterfront before cutting south toward Prospect Park and then Coney Island. Runners will spend a stretch along the ocean, possibly on the boardwalk, then head north toward the finish in Prospect Park.

Runners will have six to seven hours to complete the race, which will be on a Sunday, before organizers reopen the streets to traffic.

For years, running organizations and private fitness companies have tried and failed to gain permission from the city for a second road marathon. The New York City Marathon has far more applicants than slots, with upward of 50,000 finishers. Others secured places by running some other New York Road Runners races or hitting time standards, or through charities or tour companies.

With roughly 20 million people in the metropolitan region, and hundreds of thousands of runners, there has been little doubt in the running industry about New York’s ability to fill a second major road race.

But for a variety of reasons, including a busy calendar of parades and festivals and the longtime relationship between the city government and New York Road Runners, the organization that owns the New York City Marathon, the city had never granted a permit for a major second road marathon. New York Road Runners has long resisted the idea of staging a spring road marathon, preferring to maintain the unique place the New York City Marathon holds in the running calendar.

Since 2013, however, Steve Lastoe, the founder of New York City Runs, which began as a community running organization in 2009 and now stages dozens of races and events throughout the city, has been working with public officials to move its Brooklyn marathon to the streets.

“This was a matter of us working with the city all these years, and them getting to know us and trust us enough to be able to do something like this,” Lastoe said.

Lorraine Grillo, the city’s senior adviser for recovery, said expanding the race was part of the effort to help the city come back from the economic toll of the pandemic. Large races can generate significant economic activity, especially with meals and hotel rooms.

Lastoe said that permits were pending, but that he expected to register as many as 18,000 runners, and possibly 20,000, or more than three times more than previous editions of the race, which would make it one of the largest in the country. He expects about a third of them to run the full marathon, and the other two-thirds to do a half-marathon that will mostly follow the same route for the first 13 miles.

The Brooklyn Marathon moved partially into the streets three years ago, when marathoners ran the same course as half-marathoners, starting on Eastern Parkway near the Brooklyn Museum and spending a few miles on Ocean Parkway, before ending up in Prospect Park. The route was largely the same as what had been known as the Rock ’n’ Roll Brooklyn Half Marathon, staged by Competitor Group, a sports marketing company, from 2015 to 2017.

Lastoe’s organization took over that race in 2018. At its conclusion, marathoners had to circle Prospect Park four times. Competitor Group lobbied the city for a second major marathon during Mayor Michael R. Bloomberg’s administration, but was not successful.

Lastoe said he was not yet sure what it would cost to stage the race or what he would charge runners. For several years, his organization’s races were cheaper and smaller than others.