Al Ain: Graham Arnold was expecting plenty from his Socceroos at the Asian Cup. Well… who expected this?

Despite endless talk about confidence, belief and "expecting to win" with an exciting new attacking system, not much has really changed for Australia: slow and ponderous build-up play, a dearth of creativity, an inability to beat defenders one-on-one, and a frustrating failure to finish chances. The same problems that had people calling for Ange Postecoglou's head. 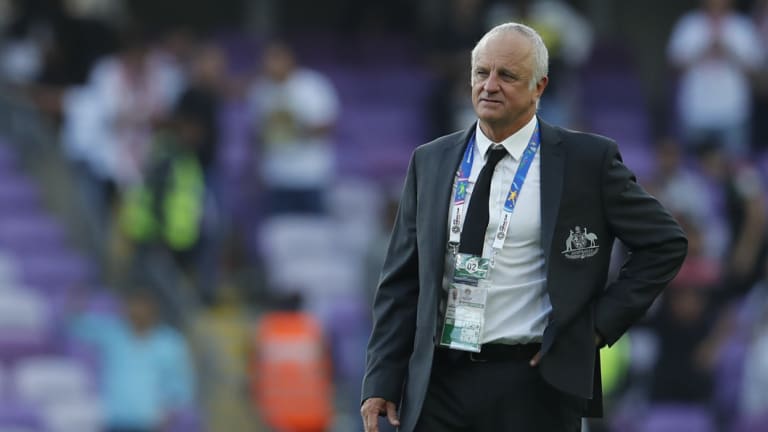 Troubled waters: Socceroos coach Graham Arnold has plenty to think about after the team’s horrific start to the Asian Cup.Credit:Hassan Ammar

Sunday's 1-0 defeat to Jordan has provided a blueprint for the next two teams the Socceroos will face at the tournament, Palestine and Syria. But 'The Chivalrous' haven’t exactly reinvented the wheel.

For years, Australia has battled to break down teams who set up with compact defensive blocks and look to pounce on the counter-attack. Jordan looked dangerous almost every time they did, but it was Anas Bani-Yaseen's headed goal from a corner kick that ended up deciding the match at the Hazza bin Zayed Stadium in Al Ain.

The statistics said it all. The Socceroos had a whopping 77 per cent of possession and 19 shots. At least half a dozen of them were clear-cut opportunities – but the longer the match wore on, the more nervous and panicky Australia were in front of goal, and the more emboldened Jordan became as their inspirational captain and goalkeeper Amir Shafi kept on batting them away.

We lost last time and we won the tournament. It is disappointing, but it's not taken away any of the belief.

If Arnold has had a honeymoon period since starting his second stint in charge of the national team, it’s well and truly over now. He wanted his team to play like Liverpool. They looked more like Hartlepool.

Jordan coach Vital Borkelmans was claiming a major tactical victory over Arnold but Socceroos skipper Mark Milligan insisted it was more a case of bad execution than a bad gameplan.

Milligan said they knew exactly what Jordan were going to do. They were just too "naive" to deal with it.

"I don't think they outsmarted us, they scored from a corner," he said. "We just needed to be a little bit more patient. If we were more patient we would have created more opportunities.

"I don't think it was a tactical thing at all. It just took us a little while to get into that rhythm. By the time we got into it, it was a little bit too late.

"You see what it means to them after the match. We need to understand that's the kind of feeling we're going to face every game."

It shouldn't take a defeat like this to install a sense of urgency into this team, but that's the scenario now. All is not lost, though. Not quite yet. The new structure of the expanded Asian Cup works to Australia’s favour. Only eight of the 24 teams in the UAE will be eliminated after the group stage. Palestine’s scoreless draw with Syria, their first ever point in the Asian Cup, is a good outcome in the context. Even if they finish third in Group B, the Socceroos are still right in the mix to reach the round of 16.

But any thought of Australia being a serious contender for the title and competing with the likes of South Korea, Iran, Japan and Saudi Arabia seems to have evaporated — at least outside of the team environment. Those in it are still clinging to hope. They don’t have much choice.

"We lost last time and we won the tournament," Milligan said, referring to the 1-0 defeat to South Korea they suffered before taking out the 2015 Asian Cup. That, however, was on home soil against a much better calibre of opposition.

"We still go into the next game with a great deal of confidence. We go into every match wanting to win and that's not going to change now. It is disappointing, but it's not taken away any of the belief."

Believing is one thing, doing is another. Time for Arnold and his players to earn their keep.