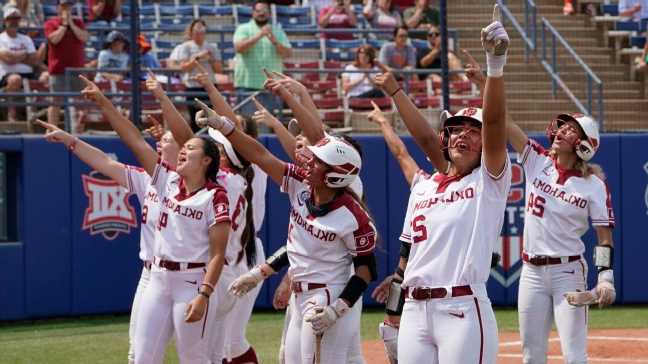 It has been a long wait for the Oklahoma softball team.

Nearly two years have passed since the Sooners were swept by UCLA in 2019 at the Women’s College World Series, and their chance for redemption was delayed when the coronavirus pandemic wiped out the 2020 season. After a historically dominant regular season this year, the top-ranked Sooners head into the 2021 College World Series as the favorite to claim their third title since 2016.

The NCAA softball tournament field will be announced Sunday (9 p.m. ET, ESPN2 and the ESPN App), setting the stage for what will be a busy few weeks of college softball. Regional play begins Friday and the Super Regionals will start May 27 before the Women’s College World Series gets underway on June 3 in Oklahoma City.

Ahead of the selection show and the tournament to follow, here are some of the best teams and players from around the country to key an eye on:

The Sooners cruised through the Big 12 tournament, capped by a 10-2 win against Oklahoma State in the championship, and they head into the NCAA tournament as the clear team to beat. Since opening the season by setting the NCAA single-game record with 13 home runs in a rout of UTEP, the Sooners have hardly slowed down. During the regular season, the Sooners smashed an NCAA-leading 120 home runs — 29 more than Arizona State, which had the second most — and started the season with 33 straight wins.

If the Bruins are able to defend their 2019 crown, it certainly wouldn’t come as a surprise. They breezed through the rugged Pac-12 to win their 11th conference title and boast the nation’s best player in P/1B Rachel Garcia, who, along with UCLA teammate Bubba Nickles, is expected to compete for Team USA at this summer’s Tokyo Olympics.

The Crimson Tide topped Florida 4-0 on Saturday to win the SEC tournament and received the lone first-place vote that did not go to either Oklahoma or UCLA in the most recent USA Today/NFCA Coaches Poll. Both Bailey Hemphill and Alex Mack hit over .400, while pitcher Montana Foues (1.62 ERA) served as the ace in the circle.

While the Tigers may have fallen just short of claiming the ACC tournament title, what they accomplished as a first-year program in 2021 has been incredible. They went 29-5 during ACC play to claim the regular-season title and enter the postseason looking to add to the their storybook season. Valerie Cagle led the team by hitting .420 with a team-best 15 home runs.

As mentioned above, Garcia is the best player in the country and has been a dominant force both in the circle (14-0, 0.60 ERA) and at the plate (.362 average, 1.262 OPS, 11 HRs). She has won back-to-back USA Softball National Player of the Year honors and will leave UCLA as one of the most accomplished players in college softball history.

Oklahoma’s list of impact players is even longer than its offensive accomplishments — six players who had at least two plate appearances per game hit over .400 — but Alo, Jennings and Coleman stand out on a team full of stars. Coleman led the team in hitting with a .492 average, while Alo (27) and Jennings (24) combined for 51 home runs — a total that would be competitive with some of the best power-hitting teams in the country.

The home run champion in the SEC, Burnside ranks second nationally — behind Oklahoma’s Alo — in home runs and serves as a key piece for an Arkansas team that won 40 regular-season games and has a chance to make a deep run in the tournament.

One of the few pitchers to beat UCLA during the season, Plain went 29-2 during the regular season with a 1.19 ERA. If the No. 5-ranked Huskies make a deep World Series run, it will likely be due to Plain’s dominance in the circle.