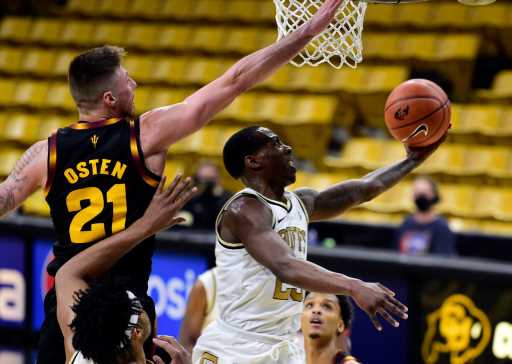 March Madness is nearly upon us and for the first time in nearly a decade, two teams from Colorado could be going to the big dance.

The Buffs, ranked No. 23 in this week’s Associated Press poll, seem like a lock for a berth after clinching their eighth 20-win season in the Tad Boyle era.

The Rams, however, may need some help to reach their first appearance since 2013. Several bracketologists have CSU among the last four teams in, which means they still have some work to do in the Mountain West Tournament.

Northern Colorado (10-10) is the No. 8 seed in the Big Sky Tournament and would have to win the tournament in order to earn a spot in the NCAA Tournament. The Bears’ lone appearance was in 2011.

Here’s a look at what seedings the teams are predicted to have in the NCAA Tournament:

Palm lists CSU as a bubble team: “The Rams are a game below .500 against Quad 1 and also Quad 2, but they have no other losses. Their schedule is just so-so and everything good they have done has come in league play. They should make it if they can avoid an upset.” See the full bracket projection.

Note: The Rams were among the last four teams in. See the full bracket projection.

CU Buffs: No. 5 in the East region against No. 12 Winthrop

Note: The Rams were among the first four teams on the outside looking in. See the full bracket projection.