The Boston Celtics have been at their best this season when they are forcing turnovers, spacing the floor and knocking down outside shots.

They found out in their win at home against the Pacers that they were equipped to win an ugly, physical game as well.

Irving and Marcus Morris each scored 20 points, and the Celtics rallied in the second half to beat the Indiana Pacers, 84-74, on Sunday in Game 1 of their first-round playoff series.

Jayson Tatum finished with 15 points for fourth-seeded Boston, and Al Horford added 10 points and 11 rebounds, and Gordon Hayward had 10 points. It was the first playoff game since 2017 for Irving and Hayward after each missed last year’s postseason with injuries.

Game 2 is Wednesday night in Boston.

The fifth-seeded Pacers led by 11 points in the first half but had just 8 in the third quarter. The Celtics capitalized and led by as many as 22 in the fourth. Indiana finished with a season-worst 29 points in the second half.

Cory Joseph had 14 points for the Pacers, and Bojan Bogdanovic was their lone starter in double figures with 12 points.

The Celtics’ 84 points were their fewest of the season; it was the first time Boston scored fewer than 100 points and won. 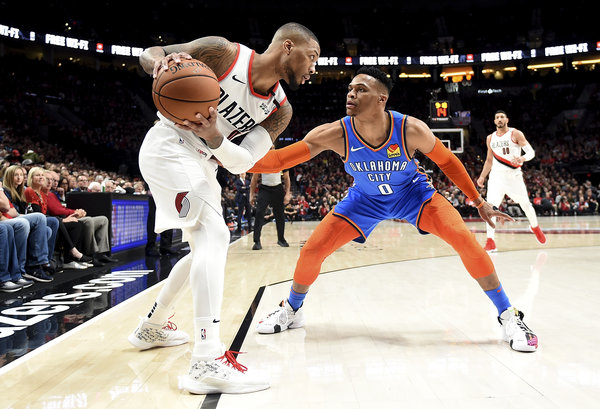 Russell Westbrook had 24 points, 10 assists and 10 rebounds for his ninth career postseason triple-double. Paul George, who was a game-time decision because of a sore shoulder, added 26 points and 10 rebounds after a slow start.

Portland led by as many as 19 points in the first half, but the Thunder pulled to 80-77 early in the fourth quarter. Oklahoma City could not get closer, and Lillard hit a 30-footer to extend the Blazers’ lead to 89-81 with 6 minutes 38 seconds left.

Westbrook appeared to hurt his right knee or ankle and grimaced while trying to walk it off. Trainers attended to him on the bench at the next timeout but he returned.

It was the first postseason meeting between the teams since the Thunder moved from Seattle in 2008. Oklahoma City beat the Blazers in all four meetings this season, including a heated 129-121 overtime victory on March 7.

The Thunder have been to the playoffs every season since the move, but they have not made it past the opening round for the past two seasons.