ALBANY — Lauren Mullen pulled her black hat low over her eyes, paid $10 for a ticket and entered Sefcu Arena just before tip-off recently. She sat in Section 150. There were 18 rows between her and any other fans. She trained her focus on the two head coaches.

On the visiting bench sat the University of Massachusetts, Lowell coach, Tom Garrick, a former N.B.A. player. Last spring, Mullen, then the women’s basketball coach at New York University, interviewed for the position that Garrick now holds. It was the third time in four years that she had been a finalist for a Division I head-coaching job. Her résumé included a 103-58 record and five postseason berths with the Violets.

On the home sideline stood Mullen’s wife, Colleen, the coach of SUNY Albany. Colleen got the job one month after Lauren lost out to Garrick. An associate coach at West Point for six years, Colleen reached the N.C.A.A. Division I tourney twice. When Albany hired Colleen, Lauren resigned from N.Y.U. to stay at home with their children: Maggie, 3, and 1-year-old twins, Brennan and Callan.

“When you think about it, if I had gotten the Lowell job, I would’ve been over there,” Lauren said, pointing to Garrick. And Colleen, she added, would have been with the children. “Crazy, just crazy,’’ she said.

It is, though, the path they are taking as a same-sex coaching couple with three small children and all sorts of demands and challenges.

Indeed, Colleen joined a small sorority when Albany hired her. Although the Supreme Court approved gay marriage three years ago and college campuses are often among the more progressive places in the United States, Colleen says she is one of only five women she knows of who are openly gay head coaches in college basketball. She recalled how Sue Johnson, her coach at the University of New Hampshire, came out 16 years ago, when Colleen was a senior.

“Sue finally was like, ‘So, you know my partner, Kelly?’” Colleen said. “We used to go to her house, and she used to take the pictures off the wall of her family.”

It was the chaos familiar to a lot of dual-income households that led Lauren and Colleen to a crossroads last winter. After four years of matching basketball calendars to Colleen’s biological clock to plan births for the off-season, timing recruiting calls around nap schedules, and wrestling with nanny problems and a merry-go-round of fill-in babysitters, they needed a change.

“We were at a breaking point,” Colleen said. “A lot of coming and going.”

“Absolute insanity,” Lauren said. “To be frank, at the end of last year, it was like, O.K., what are we going to do?”

Both 38, the Mullens knew one of them needed to get a Division I head coaching job so the other could afford to step back into a supporting role.

A pact was made early on. They would not pursue the same jobs, though they had competed for employment once before.

That occurred when they met, in 2007. At the time, Lauren was a graduate assistant at Lehigh. There was an opening for an assistant coaching position, and Lauren applied for the internal promotion. Colleen, then an assistant at Southern New Hampshire University, also applied. They possessed similar credentials. Colleen stood 5 feet 2 inches and had starred at the University of New Hampshire as a pass-first point guard. Lauren was 5-foot-4, and was a facilitator at Hofstra. Colleen, who is six months older, got the job.

Soon after, they played one-on-one for the first and only time. Lauren beat Colleen. Any lingering tension turned to mutual interest. On opening day of practice that season, they went on their first date in New Hope, Pa.

“She didn’t hate me for that long,” Colleen said. “She got a master’s from Lehigh. She’s in good shape.” 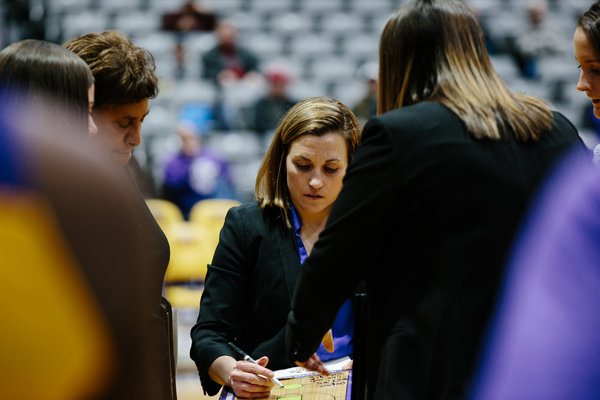 Early in their relationship, they visited Colleen’s family. While there, they realized they had played in the same Florida tournament when they were 13. Colleen found a photo that captured Lauren guarding her on an inbounds play.

They kept their relationship quiet as they began to climb the coaching ladder, drawing interest from South Carolina to Connecticut. Once, while Colleen was at Long Island University and Lauren was at Sacred Heart in Connecticut, they were in the same conference. L.I.U. beat Sacred Heart both times they played.

“She’s lying,” Lauren said. “She would have made me sleep on the couch. Takes her a little time to let the steam off.”

Colleen went north to West Point to become an assistant coach in June 2011. Weeks later, President Obama ended the United States military’s “don’t ask, don’t tell” policy, the 17-year-old law that banned openly gay men, lesbians and bisexuals from military service. Colleen then found herself in competition with Lauren once more, this time for a recruit. Her name was Kelsey Minato, from Huntington Beach, Calif.

Minato was a prolific outside scorer and Lauren was the first to reach out to her. She and Colleen had sat side-by-side in the stands watching Minato at a tournament in Arizona, and Colleen encouraged Lauren to speak with Minato’s coach afterward. Lauren followed through.

A few weeks later, Army realized it needed a guard, and Colleen asked Lauren whether she would mind if Army pursued Minato. Lauren welcomed the competition. Minato was unaware of the relationship between the recruiters, and narrowed her choices to Sacred Heart and Army. She eventually became the best player in Army history, scoring 49 points in one game, breaking records and having her No. 5 uniform retired.

“I was going to ride that wave for a long time, have a nice halo around my head for finding her,” Colleen said.

But it was Lauren who became a head coach first. That summer, she signed on to lead N.Y.U. While Colleen sold recruits on West Point’s structure, Lauren pitched West Fourth Street’s freedom. One day, Lauren announced that practice was canceled. In came the West Point women in camouflage garb for a boot camp.

In any case, wins at both schools followed, along with a wedding in May 2014.

“New experience for me,” said Dave Magarity, the head coach of the West Point women’s team. “There were a lot of cigars floating around.”

The Mullens were living in Ossining, N.Y. — 26 miles from West Point, 36 miles from Greenwich Village. And Colleen, known as The Mullenator at West Point, recalled that Magarity defended her sexual orientation. When a recruit’s parent asked which members of his staff were married, Magarity said, “Don’t ever ask that question again.”

Last May, Albany, which has reached six of the last seven N.C.A.A. tournaments, hired Colleen as head coach. After starting 1-9 this year, the Great Danes have gone 10-5 and are tied for third place in the America East.

As a head coach, Colleen, who has been openly gay since college, now finds herself calculating when to mention Lauren, who came out when she was in her mid-20s.

“When I am talking to certain people, and I bring up my wife, there’s a second thought in my head,” Colleen said. “It’s like, ‘Should I just talk about my kids?’ It doesn’t feel right when you censor yourself.”

Up in the stands, it has not taken long for Lauren to find her voice as a spectator. When the season schedule was announced, she cleared her calendar to be in attendance at Albany’s opener at the University of South Florida. She had not been able to make one of Colleen’s games in years. In the stands, Lauren described herself as “out of control.’’

She and Colleen bought a house in Bethlehem, N.Y., last August. On a recent night there, Maggie played with Disney princess stamps as Lauren cut chicken nuggets for the boys. A chalkboard featured a to-do list above a diagram of “Double Horns,” an offensive set.

“We’re like a sociology experiment because Maggie wants gowns and she’d maybe seen her moms in like 10 dresses combined,” Lauren said. The boys, she added, had all girls toys to choose from but are indicating an interest in trucks.

And Maggie is learning what comes with winning. After a victory over the University of Maryland Baltimore County, the Great Danes awaited Colleen in the home locker room. Maggie was hesitant to go inside, so Lauren let her know that she would be waiting in the hallway. After Maggie and Colleen entered, the door closed behind them. A roar could be heard as guard Kyara Frames lifted Colleen in the air, per their celebratory custom. Eleven seconds later, Maggie ran out crying.

“Mom’s having fun,” Lauren told her. “The girls are having fun.” 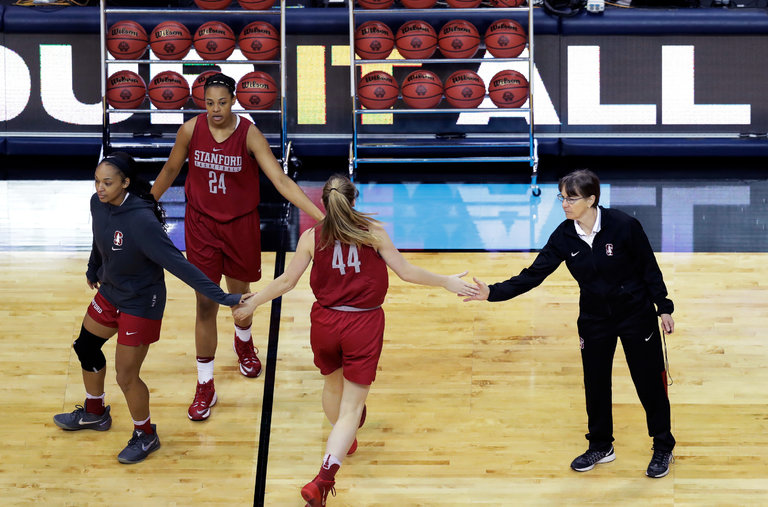