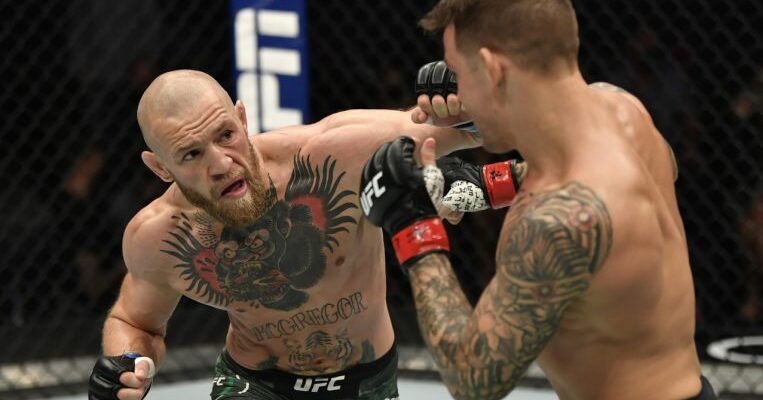 In a video posted on Twitter, he said the T-Mobile Arena would stage the fight on July 10.

It will mark the first time a capacity crowd has attended a UFC fight in Nevada since the Covid-19 pandemic.

The move dispels any doubt about the event taking place after both fighters had quarrelled on Twitter over a US$500,000 (S$671,000) donation to the American’s charity on Monday.

That had led McGregor to tell Poirier that the “fight is off”.

The Irishman was not happy when Poirier said McGregor had not made good on a promise to donate to his charity.

“A donation, not a debt. We’ve been awaiting the plans for the money that never came,” McGregor said in a reply.

Poirier replied by saying McGregor’s team “never responded” to e-mails explaining where the funds would go.

UFC has staged events in Las Vegas, Florida and Abu Dhabi since the pandemic erupted, mostly behind closed doors with strict safety protocols in place.

However, with restrictions gradually being lifted across the United States, fans are returning to sporting events.

A UFC card in Jacksonville, Florida, on April 24 is set for a full house, and on Tuesday, Nevada Governor Steve Sisolak said the state was aiming to allow venues to operate at 100 per cent capacity by June 1. Nevada drops many coronavirus-related restrictions as of May 1, although the statewide mask mandate is to remain in place.

The trilogy fight comes after American brawler Poirier, a 32-year-old Louisiana native, demolished McGregor by knockout during their second meeting in January in Abu Dhabi.

That one-sided bout followed McGregor’s first-round knockout victory over Poirier in their first meeting in 2014 at UFC 178.

McGregor (22-5), 32, will be chasing his first victory since January 2020 while Poirier (27 wins, five defeats) will be looking for a third consecutive win.

McGregor was a -300 favourite in the January fight and opened on Wednesday as a favourite again. PointsBet and FanDuel opened him at -120 over Poirier (-105).

McGregor signed the bout agreement for a trilogy fight against Poirier on Wednesday morning, he told ESPN. Poirier officially signed earlier this week for the fight.