Former Australia paceman Mitchell Johnson has ripped into Virat Kohli, saying the Indian skipper was disrespectful and made to look silly during the recent Test match in Perth.

Kohli and Australia captain Tim Paine engaged in a heated battle throughout the Test at Perth Stadium, with the pair told to cool it by the umpires at one stage. 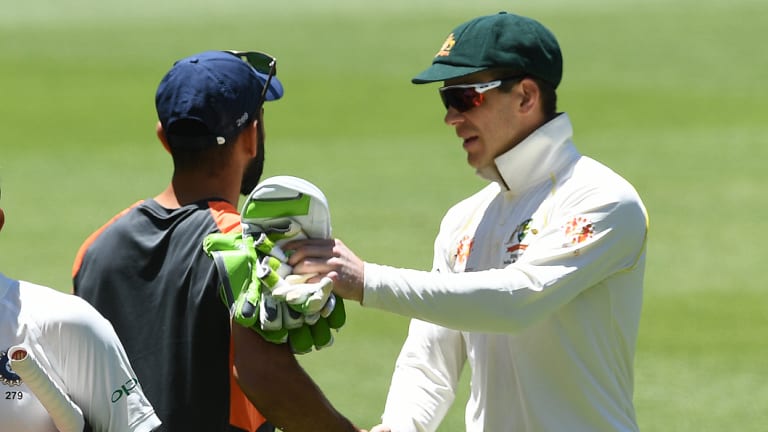 Tim Paine and Virat Kohli shake hands after the match.Credit:AAP

Paine had the last laugh after guiding Australia to a 146-run win, but the tensions are set to flood over into the Boxing Day Test at the MCG.

On Tuesday, both Paine and Kohli did their best to play down their rift, saying there were no verbal taunts that crossed the line.

The pair are set to be heavily scrutinised in the Boxing Day Test, and Johnson was quick to take a swipe at Kohli's recent behaviour.

"At the end of the match you should be able to look each other in the eyes, shake hands and say 'great contest,'" Johnson wrote in his Fox Sports column.

"Virat Kohli could not do that with Tim Paine, shaking the Australian captain's hand but barely making eye contact with him. To me, that is disrespectful.

"Kohli gets away with more than most cricketers simply because he is Virat Kohli and he gets placed on a pedestal but this Test left the Indian captain looking silly.

"Kohli has contradicted the things he said at the start of the series. He said he was a changed person – that he was coming in with a different attitude to last time and wasn't going to initiate anything.

"What we saw this Test says otherwise."

Johnson was also unimpressed that Kohli didn't acknowledge the crowd's applause when he was dismissed for 123 in the first innings.

That dismissal was controversial, with doubts about whether the ball carried to Peter Handscomb at slip.

Johnson and Kohli have history.

In 2014, Kohli fired up after Johnson threw the ball at him when attempting to hit the stumps.

"I apologised immediately because that obviously was not my intention but it sparked a heated debate," Johnson said.

"After play he came out and said he had 'no reason to respect' me. He lost me then.

"He is the No.1 batsman in the world at the moment and what he does for his team is great but I'm not sure this is how your captain should behave."