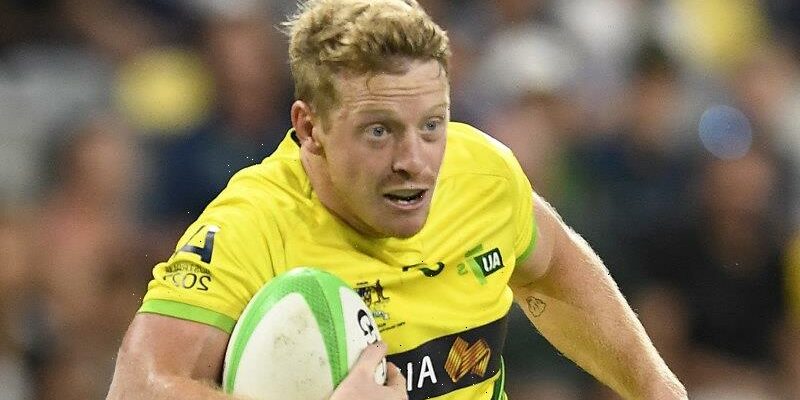 Fatherhood, a shot at an Olympic gold medal and then perhaps an NRL contract: the life-changing events keep coming for Lachlan Miller.

“In the space of a few weeks, it’s been bang, bang, bang, everything is happening,” he said.

Miller is a member of the Australian sevens side attempting to follow in the footsteps of their female counterparts, who won gold in Rio. The 26-year-old will head to Tokyo just weeks after becoming a first-time father, to son Billy. He will then make a decision on his footballing future.

“It’s very exciting times, becoming a dad and then heading to Tokyo,” he said. “Coming back with a gold medal to my young family, as well as my extended family back home, would mean everything. We’ll see how we go, but I’m pretty confident.

“Hopefully there are some decisions to make when I get back.”

Miller played the 13-man game up until the age of 22, and recently signed to Ignite Sports, the management company that oversees the careers of a host of NRL stars including James Tedesco, Daly Cherry-Evans and Nathan Brown. 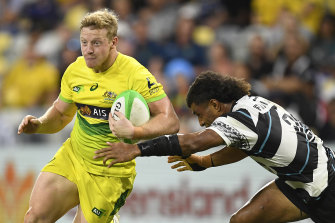 Lachlan Miller taking on Fiji in the Oceania Sevens tournament in June.Credit:Getty

The Coffs Harbour product switched codes when Glen Ella identified him during a series of standout performances in an Ella 7s tournament.

There’s a contract on the table to remain with the national sevens program, although Miller will wait until after Tokyo to make a decision. However, an NRL opportunity would be hard to knock back should it arise.

“I grew up playing league until I was 22 and loved it,” he said. “I always thought I would play rugby league my whole life and had aspirations of playing in the NRL until sevens came along. My focus at the moment is getting across to Tokyo and doing the best we can there.

“It was always a dream and aspiration to play in the NRL. The desire to give it a crack and see if I’m good enough is definitely still there.

‘Sevens teaches you how to manipulate your defender, reading cues like turned hips and making decisions. It’s the quickest sport I’ve ever played.’

“You watch the NRL now and some of the things the players are doing now is ridiculous, but I’d love to give it a crack one day.

“Obviously I have a young family now and we have to think about everything. I’ve grown up playing league but at the same time I love sevens. If there’s something that pops up, I’ll need to have a serious think about it.”

A highlights package of Miller’s time across both codes, which showcases his pace and skill, is likely to pique the interest of NRL clubs.

“I played predominantly halfback in league and also spent time at hooker and fullback,” he said.

“Transitioning into sevens, you play as a bit more of a playmaker as a centre. A centre in sevens isn’t really like a centre in league. It’s an attacking player, you get a lot of one-on-ones, and in sevens it teaches you how to manipulate your defender, reading cues like turned hips and making decisions. It’s the quickest sport I’ve ever played.

“If I was to go back to league, it would be like a running half. With my background playing half most of my life or even a hooker or fullback, I wouldn’t mind.”

The NRL rule changes have made the game quicker over the past 18 months and Miller believes the speed of sevens would help him adjust.

“Coming back into league, it would definitely help,” he said. “The speed of the game now, being able to make decisions on the run and the aerobic fitness in sevens, you just run.”

Miller’s Olympic commitments have limited his time with his partner and baby, but it will be worth it if he returns from Tokyo with gold.

“It would mean everything,” he said. “The sacrifice is all worth it in the end if, in a few years’ time when he [Billy] knows what is going on, he can watch footage of Dad hopefully winning the gold medal.”