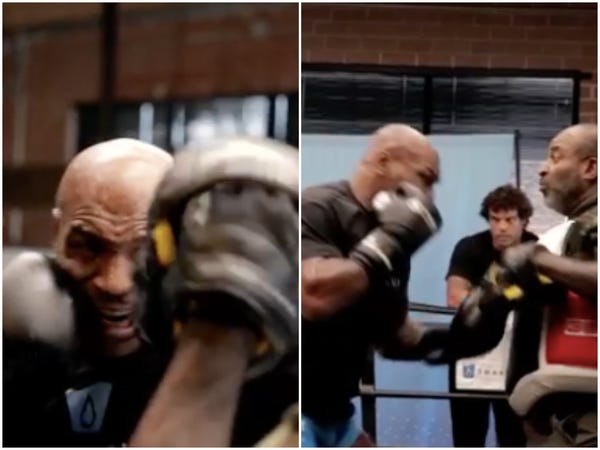 Mike Tyson's trainer Rafael Cordeiro said he thought the fighter could "kill somebody" when he felt his right hook during their first sessions together.

Cordeiro has this year been preparing the former heavyweight boxing champion for a return to the ring ahead of a November 28 charity exhibition involving Roy Jones Jr. in California.

The bout will not count on either athletes' official records but both fighters have been hyping the event as if it were a real prizefight.

Jones even said in September that he may have "made a mistake" agreeing to the exhibition because Tyson is "the bigger guy" and "the explosive guy."

And, in a weekend story from The Sun, Cordeiro told an anecdote which highlights Tyson's explosiveness, saying he's as powerful in his mid-50s as fighters 10 years his junior.

"As soon as we started training I said 'My Lord.' I didn't know what to expect from a guy who hasn't hit mitts for — I think — almost ten years," Cordeiro, a former Muay Thai champion said.

"You would have to be a good guy to spar with Mike because if you don't prepare, he is going to drop you. The power is different level," he said.

Cordeiro added that Tyson, 54, is as powerful as the MMA fighter Wanderlei Silva, 44, who is nicknamed "The Axe Murderer" and has 27 knockout wins on his record.

"I have trained a lot of heavyweights in my career, with not a lot of respect for everybody, but he is almost as powerful as Wanderlei Silva is right now.

"When you talk about power, I held his right hook and thought 'he is going to kill somebody'."