ARE, Sweden — Mikaela Shiffrin’s careful planning failed to pay off at the world championships as her gold medal bid in the giant slalom was blown off course by strong winds and a Slovakian rival.

Petra Vlhova won Slovakia’s first world title Thursday after finishing 0.14 seconds ahead of Viktoria Rebensburg in a giant slalom raced in tough conditions because of winds that reached 70 kilometers per hour (43.5 m.p.h.) and unseasonably high temperatures.

Vlhova won silver on Friday in the Alpine combined — an event Shiffrin chose to skip, to the surprise of some, to preserve energy for the giant slalom and slalom after winning the super-G on the opening day of competition.

But Shiffrin was 0.44 seconds off Rebensburg’s lead after the first run and had only the sixth fastest run in second leg. 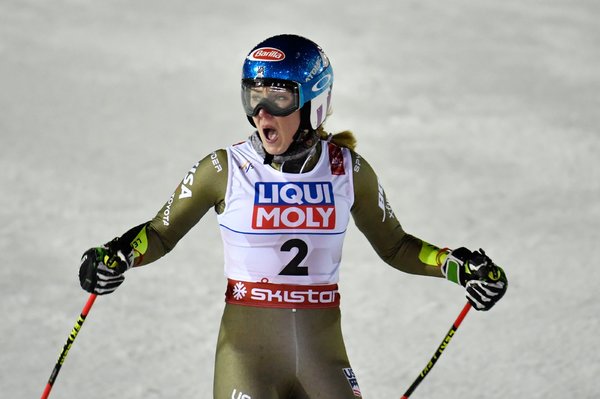 Vlhova put her hands to her head when Rebensburg, who was last down in the second leg, crossed the line with the second-best time. Rebensburg, the 2010 Olympic champion in giant slalom, was 0.40 seconds ahead at the third checkpoint only to lose 0.54 seconds in the bottom section.

It was so windy that organizers removed the banner above the finishing line. With gusts buffeting the skiers, Vlhova’s power helped her negate a 0.19 deficit to Rebensburg after the first run. She also overcame crashing into a gate in between the second and third checkpoints, which saw her briefly lose control.

“Finally,” she said, “I can show to everyone who is Vlhova.”

Vlhova is the only racer to beat Shiffrin in slalom this season, and she also won two giant slaloms recently, tying with Shiffrin in the final giant slalom before the worlds.

Shiffrin acknowledged that she struggled to get a “response from the surface” after rain for the past two days in Are, a central Swedish resort. It meant she ended up happy to come away with third place for her sixth world championship medal — just two off the American record held by Lindsey Vonn.

“I thought after 1st run, ‘If I can walk away from today with a medal after first run, that’s great!’” Shiffrin said in a tweet posted by the U.S. Ski and Snowboard Team. “Bronze feels awesome!”

The slalom is on Saturday, where Shiffrin is an even bigger favorite.