Brisbane's Lord Mayor Adrian Schrinner believes the lingering memories of the successful Sydney Olympics in 2000 will convince Australians of the merit of a serious bid for the 2032 Games.

The push for a regional hosting of the 2032 Olympics has gained fresh momentum, with prime minister Scott Morrison saying the Federal Government would commit financially and Queensland would 'always want to outdo NSW' by bettering Sydney's Games 19 years ago. 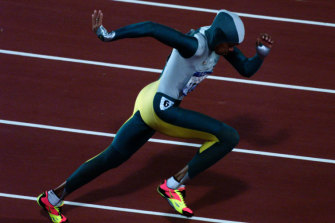 Cathy Freeman inspired the nation in 2000 and Queensland Olympic hopefuls want to leverage those memories.Credit:Steve Christo

Bach said he welcomed he commitment from the highest echelons of Australian government.

"I was impressed by the clear and strong level of commitment of Prime Minister Scott Morrison and his government for Olympic Games in Queensland, Australia," Bach said.

"He made it very clear that Olympic Games would fit 100 per cent into his government’s 10 years infrastructure planning. This early commitment and the well-known enthusiasm of the Aussies for sport are a great foundation for the Olympic Games 2032 in Queensland."

Under the new bidding process, the IOC engages in ongoing dialogue with potential hosts and has also enabled regional bids, although Bach has warned planners not to spread the events over too much of an area, or risk diminishing the feel of the event.

The era of the grand unveiling of the eventual winner has gone, while new measures have also been put in place to ensure existing venues are utilised to avoid excess wastage and costs.

"The next step is for the AOC and our federal, state and local governments to work together to fully investigate this opportunity, so we’re in a position to make an informed decision about putting a proposal forward," Schrinner said.

"The South East Queensland mayors started this journey in 2015 as a way to drive infrastructure delivery and create jobs and here we are on the cusp of an Olympic Games bid.

"We’re confident that a cost-effective Games delivered across our region will deliver enormous benefits to Queensland and the nation and it’s encouraging to see the Prime Minister backing us."

It would cost around $10m to continue with the streamlined bidding process while the Games would cost an estimated $5.3b to host, although the IOC insists they could almost be cost-neutral given the massive cash injection from TV broadcasters, ticket sales and tourism.