When Esan Marsters left Auckland at the age of 17 with little more than a dream of starring in the NRL in hand, representing his Maori roots wasn't even possible.

The Tigers young gun has quickly transformed for rookie to Kiwi regular and on Friday, he will start in the centres for the New Zealand Maori All Stars. 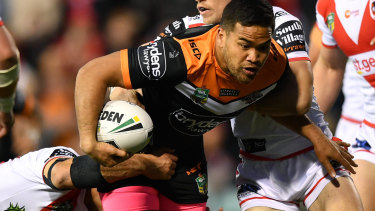 Given how close Marsters is to his Cook Islands born, Maori raised mother, the match will rival the day he made his New Zealand debut against England last June.

"It’s up there with making my Kiwi debut," Marsters said. "It’s not every day you get to experience new things so to come and play with some of the good players from each individual club makes it extra special.

"For myself it is about learning who I am, where I come from and gaining new experience.

"I think this game is going to go so far and if we can build on this hopefully it keeps building in the years coming."

Marsters' mother and fiance will be among the AAMI Park crowd on Friday and the former may shed a tear when the teams take to the field.

There were emotional scenes at the family home when Marsters left Auckland almost five years ago to chase his NRL dream and while she may be his biggest critic, there is no doubting she remains his number one fan.

"Growing up in a Cook Island family and being raised by a Maori one as well – it’s a special one – there were a few tears there," Marsters said of the moment he told his mother he'd been picked.

"She gave me a call before I came into camp and I know she will be supporting me no matter what.

"Hopefully I play well on Friday so she doesn’t give me a hiding after the game."

Hiding or not, Marsters will be integral to the Tigers' title hopes this season.

He played in all of the club's 24 matches last year and while that's almost three times as many as new captain Moses Mbye featured in, the 22-year-old threw his full support behind his new skipper.

"He’s been massive for us," Marsters said. "To have someone there that will play the whole year will be cool.

"A lot of people are saying he’s only played nine games for the club but the stuff he has done off-season for us… he’s been really good.

"I’m happy he’s the captain – hopefully this year we can go well and play finals footy. I think we have the right guy leading us."

Mbye will fill one of the critical spine positions but who will wear the No. 6 jersey at Wests remains a mystery.

Tigers coach Michael McGuire will use the team's only trial – against the Warriors in New Zealand on March 2 – to determine who deserves first crack as the team's starting five-eighth.

Josh Reynolds and Benji Marshall can't be split on their pre-season work and are both fit and firing, leaving McGuire with a welcome selection headache.

Marsters doesn't mind either way, labelling the pair "special" when pressed on the matter.

"Both of them have been training really well," he said.

"They’re both special players so it will be interesting to see who I’m running around with this year."