Marcus Rashford praised the actions of Ivelin Popov following England’s comprehensive 6-0 victory in Sofia on Monday, after the Bulgarian captain had pleaded with home fans to stop their racist chanting.

The Three Lions moved one step closer to qualification for Euro 2020 but the clash was marred by shameful chants from sections of the home crowd at the Stadion Vasil Levski.

Popov was filmed at the half-time break speaking to supporters near the players’ tunnel with the game on the verge of being abandoned. 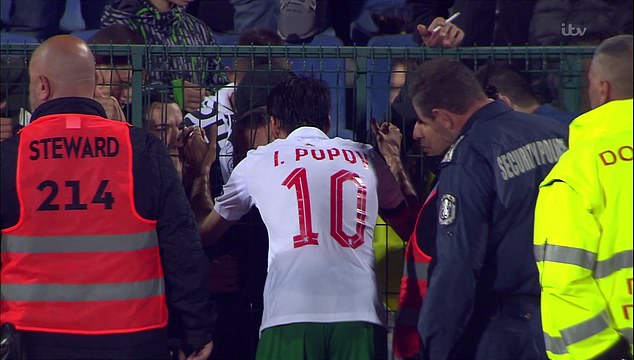 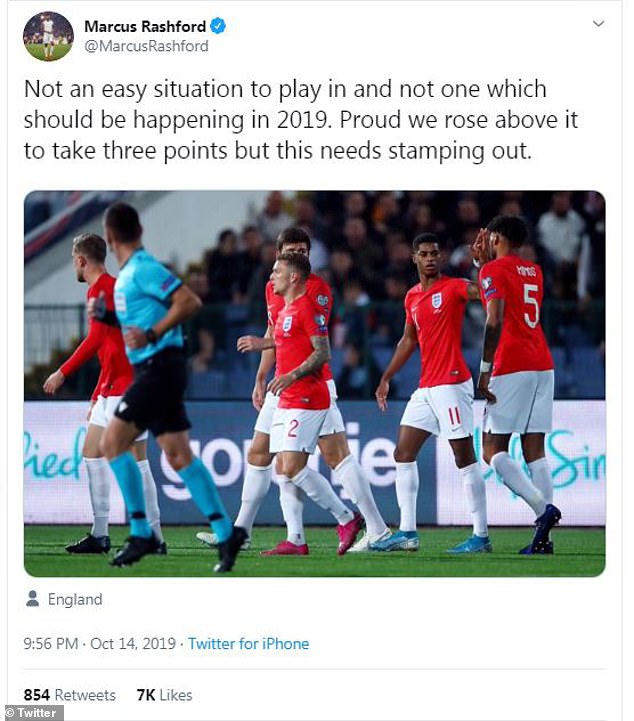 And in a tweet posted shortly after full-time, Rashford said: ‘Been told what the Bulgaria captain did at half-time. To stand alone and do the right thing takes courage and acts like that shouldn’t go unnoticed. #NoToRacism.’

The first step of UEFA’s protocols from their three-step procedure in the event of racist chanting was implemented, and a PA message was read aloud over the tannoy system at the stadium.

But the game was again temporarily halted when players and boss Gareth Southgate reported hearing further racist abuse, including monkey noises, from the crowd.

In the aftermath of the unsavoury scenes, England captain Harry Kane stated on social media that racism ‘needs stamping out for good’.

He said: ‘Great performance and I’m proud of the togetherness we showed in some disgraceful circumstances. Racism has no place in society or football. It needs stamping out for good.’

Ben Chilwell believes that the Three Lions defied the chanting with their superb showing on the field. He added on Twitter: ‘The football did the talking tonight. Proud of everyone.’ 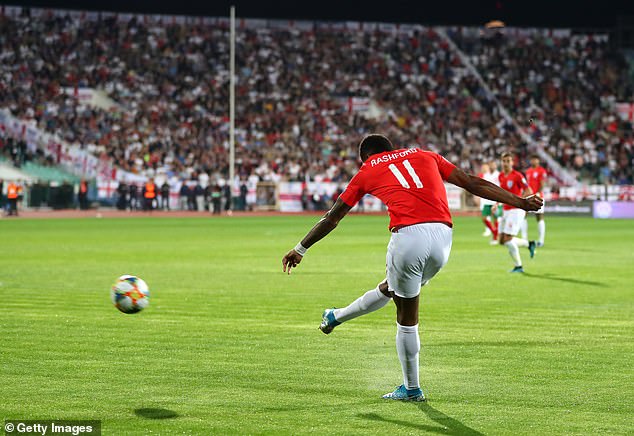 Team-mate Harry Maguire was also unified in pride for England’s showing, but urged action to be taken.

He posted: ‘The best way to bounce back. Proud of the team. There’s no place in football for that – disgraceful behaviour. Something must be done.’

Jordan Pickford followed suit by condemning the actions of home fans, adding: ‘Good win under difficult circumstances. There is absolutely no place for scenes like that. Proud of the team tonight.’

Chelsea starlet Mason Mount described the chants inside the ground as ‘unacceptable’, before praising the support from England’s travelling contingent.

Debutant Tyrone Mings was a target of abuse throughout the evening, along with goal scorers Marcus Rashford and Raheem Sterling.

But the Aston Villa stalwart later admitted the clash had been a ‘proud’ moment for him despite the ‘unfortunate’ incidents.

He tweeted: ‘Very proud moment for me and my family tonight to make my England debut. The unfortunate incidents in the game were handled as well as possible and proud of how we handled it.’ 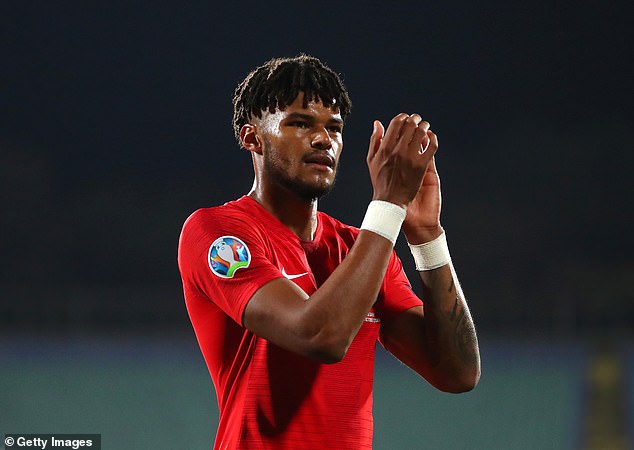 Abuse had been directed at Raheem Sterling, Rashford and debutant Tyrone Mings (pictured)

The FA promptly confirmed they would request UEFA to investigate ‘as a matter of urgency’, stating on social media: ‘We can confirm that England players were subjected to abhorrent racist chanting while playing in the #EURO2020 qualifier against Bulgaria.

‘This is unacceptable at any level of the game and our immediate focus is supporting the players and staff involved.

‘As we are sadly aware, this is not the first time our players have been subjected to this level of abuse and there is no place for this kind of behaviour in society, let alone in football.

‘We will be asking UEFA to investigate as a matter of urgency.’