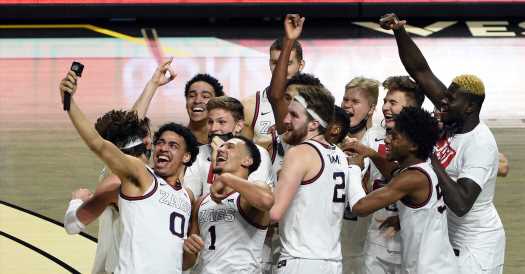 When the N.C.A.A. men’s basketball tournament bracket was announced on Sunday night, it was in keeping with sports during the pandemic: stripped down, masked up and written hopefully in pencil.

There was no slow tease because, well, what was the point? Some of the usual excitement — is the alma mater being shipped to Portland or Pittsburgh followed by a rush to book flights and hotels — was removed from the equation this year because the entire 68-team tournament, which begins Thursday with four play-in games, is being staged in and around Indianapolis.

As expected, Gonzaga, unbeaten in 26 games, was awarded the top seed and placed in the West region. Baylor, Illinois and Michigan were given the other No. 1 seeds. Hartford and Grand Canyon are making their first appearances, and Georgetown and Oregon State — picked last in their conferences at the start of the season — are unexpected interlopers as Big East and Pac-12 champions.

Duke and Kentucky, the sport’s two biggest TV draws, are gone together from the tournament for the first time in 45 years, but at least the star of the 2018 tournament has returned: Sister Jean Dolores Schmidt, age 101 and fully vaccinated, is back as Loyola-Chicago’s talisman.

Still, the event’s characteristic volatility may extend well beyond the court given the effects of the pandemic.

This year, it is fair to say, March Madness is not hyperbole.

Consider the extraordinary lengths that the N.C.A.A., after canceling last year’s tournament, which was expected to generate $800 million, is taking to stage the event in a season in which 20 percent of regular-season games were canceled, numerous prominent coaches contracted the virus and powerhouse programs like Duke, Virginia and Kansas dropped out of their conference tournaments last week because of coronavirus infections.

The teams, which began arriving in Indianapolis on Saturday night by chartered plane, or by bus if they were within 350 miles, have been required to return seven days of negative tests before departing. They will be sequestered in single rooms on their own floor in hotels where they can eat, sleep, study, practice and in some cases play without having to step foot outdoors.

The fear, of course, is that players might contract the virus while mingling with the hundreds of thousands of fans who are expected to descend on Indianapolis over the next few weeks as the five basketball venues — from quaint Hinkle Fieldhouse to voluminous Lucas Oil Stadium — will be opened to 25 percent capacity.

If teams, which will be tested daily, do not have at least five players available, they will be replaced by a team on a waiting list — Louisville is at the top, followed by Colorado State, St. Louis and Mississippi — until 6 p.m. Eastern time on Tuesday. After that, teams that cannot play will exit and their opponents will be advanced to the next round. It is not clear whether an infected team will be required to have a coach.

“I can’t imagine an athletic director not having some supervision or coach available in some capacity,” said Dan Gavitt, the N.C.A.A.’s senior vice president for basketball. “But these are extreme times.”

Formulating a field has also been complicated by the pandemic, leaving the selection committee, led by Kentucky’s athletic director, Mitch Barnhart, to assess teams that have been in and out of virus pauses and have had missing players or coaches for certain games. The stunted schedules have thrown bugs into the ratings metrics used to seed teams.

For example, the N.C.A.A.’s NET ranking has Colgate as the ninth best team in the country. The Raiders (14-1) played only five teams this season — all in the Patriot League, whose tournament they won on Sunday. But they were given a computer turbo boost because Army and Navy, the only Patriot teams that played outside the league, had a close loss to Florida and a victory over Georgetown on their résumés. Colgate was given the 14th seed in the South region and matched up against Arkansas in the first round.

Meanwhile, Michigan State, at 15-12 and with three wins in the last three weeks over top 10 teams (Michigan, Illinois and Ohio State), is ranked 70th in the NET, a place normally far past the wrong side of the bubble. The Spartans were seeded 11th in the East region and will face U.C.L.A. in an intriguing play-in game.

The conference tournaments were no more orderly. Not only were there scant top seeds wrapping up automatic berths — just 11 of 31 managed a sweep of the regular season and tournament titles — but the committee struggled with where to place Kansas and Virginia when both teams might be missing key contributors, if they can play at all. (Kansas center David McCormack was ruled out of the Big 12 tournament because of the coronavirus three days before the Jayhawks dropped out because another player tested positive.)

As it turned out, they placed both in the West region, which left the possibility of a very clear path to the Final Four for Gonzaga, which is trying to become the first team since Indiana in 1976 to win a championship with a perfect season. The second seed in the West is Iowa, which Gonzaga — coming off a 17-day pause — cruised past in December.

The most stacked region appears to be the Midwest, where Illinois could have to go through Loyola-Chicago or Georgia Tech, and then dangerous Oklahoma State to reach the regional final, where they could see red-hot San Diego State, rugged West Virginia or dynamic Houston.

At least those teams are in, though. For Louisville, the last team left out, it was an especially cruel twist. Rick Pitino, who was fired by Louisville in 2017 amid a federal corruption investigation that could bring N.C.A.A. sanctions, has Iona in the tournament, playing No. 2 seed Alabama. And the head of the selection committee, Barnhart, is the athletic director at Louisville’s rival, Kentucky.

The Cardinals’ only hope for reaching the tournament is to benefit by someone else’s misfortune with the virus.

For now, though, 68 teams are traveling to Indianapolis directly from the site of their conference tournament. If all goes as hoped for the Atlantic Coast Conference champion, Georgia Tech, which left Atlanta on March 4, it may be gone for more than a month.

“There’s going to be a champion crowned in a few weeks,” Oklahoma State Coach Mike Boynton said on Tuesday as he rode out of Stillwater, Okla., on a bus headed for Kansas City, his team’s return date unknown. “It may not be the best team in basketball history, but it might be the most resilient.”