Jesse Lingard scored twice as Manchester United celebrated its first match under the new coach Ole Gunnar Solskjaer with a 5-1 victory at Cardiff in the Premier League on Saturday.

Solskjaer took over this week after Jose Mourinho was fired for the club’s lackluster record.

“Football is easy if you’ve got good players,” Solskjaer said. “They are a great bunch of players, and their quality is unbelievable.

“I arrived on Wednesday night and only had Thursday and Friday with the players. Wayne Rooney texted me and gave me some advice, so it must be down to him. He told me to make them play football, enjoy themselves and be Manchester United.”

Marcus Rashford needed only three minutes to give United the lead as he blasted home a free kick. Solskjaer, who spent nine months in charge of Cardiff when the Welsh club was relegated in 2014, was up off his seat again after 29 minutes when Ander Herrera’s deflected shot went in.

Rashford was then deemed to have handled the ball in the box, and Victor Camarasa converted the penalty for Cardiff.

But there was no stopping United, and Anthony Martial rounded off an excellent move to make it 3-1 before halftime.

Lingard added a goal from the penalty spot after being fouled in the 57th minute, and he struck again in the closing stages.

It was the first time United had scored five goals in a league match since May 2013, in Alex Ferguson’s finale as the team’s coach.

Rooney, like Solskjaer a former United hero as a player, said the change in coaches was badly needed.

“The players obviously looked a bit restricted,” under Mourinho, Rooney said according to Reuters. “The players have ability, and today we’ve seen that. A lot of things were happening around the team and around the manager, which isn’t good. Ole’s given them that freedom.” 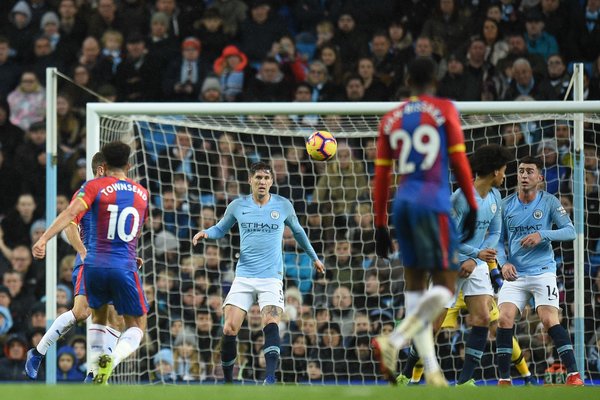 CRYSTAL PALACE 3, MAN CITY 2 Crystal Palace, spurred by a goal on a stunning volley by Andros Townsend, beat the defending champion, Manchester City, in the biggest upset of the Premier League season.

It was the first loss at Etihad Stadium since April for Man City, which fell four points behind first-place Liverpool. Crystal Palace, which had not won a league game at Man City since 1990, trailed by 1-0 on a header from Ilkay Gundogan in the 27th minute.

Jeffrey Schlupp tied it in the 33rd when he beat Ederson with a low left-footed shot across goal. Two minutes later, Crystal Palace, which entered the game 29 points behind Man City, went ahead for good on a magnificent left-footed shot from Townsend into the top-right corner.

Real Madrid extended its record number of world titles to seven, including the past three Club World Cups.