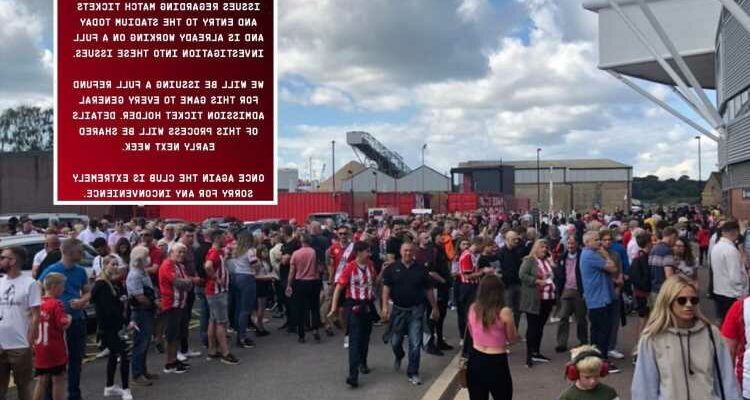 MANCHESTER UNITED and Southampton fans were left raging after being stuck outside St Mary's and being forced to miss the start of the match.

Saints apologised after an issue with their turnstiles and promised a full refund to ticket holders.

One fan described the queues outside as 'insane' while another revealed that the away end – where the Man Utd fans are situated – had not moved in ten minutes.

There were clearly some empty seats in the ground in what was Southampton's first capacity crowd in nearly 18 months.

An official statement from Southampton read: "We would like to apologise to fans attempting to gain entry to the stadium, and thank them for their patience.

"The club is dealing with a technical issue with its turnstiles and is aiming to resolve this as soon as possible."

They later added: "We will be offering a full refund for this game to every general admissions ticket holder.

"Details of this process will be shared early next week.

"Once again the club is extremely sorry for any inconvenience."

And another added: "Shambolic. Open the gates."

Those in the stadium were given something to shout about after just 30 minutes when Che Adams' shot was deflected in off Man Utd midfielder Fred.

The home side went in at half-time with the lead as Ole Gunnar Solskjaer's side struggled to break down the south coast outfit.

But they eventually found a way through ten minutes after the break when Mason Greenwood fired home from the edge of the box after another sumptuous assist from Paul Pogba.