After months of searching, Manny Machado found a new team on Tuesday in the US, agreeing to join the San Diego Padres for 10 years and $300 million. The deal is the first free-agent contract ever to guarantee a player $US300 million ($A418.8 million), and sets up baseball's other unsigned star free agent, Bryce Harper, to top it soon.

The Padres did not announce the agreement, which will not become official until Machado passes a physical, but the deal was confirmed by a person in baseball with direct knowledge of it. 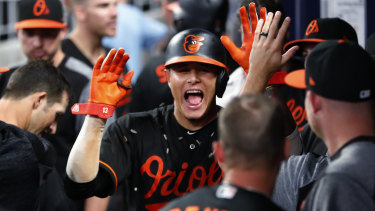 Manny Machado, pictured here during his time at the Orioles, has agreed to a massive deal with the Padres.Credit:AP

Machado, 26, spent last season with the Baltimore Orioles and the Los Angeles Dodgers, hitting .297 with 37 homers and 107 runs batted in. He was part of the Dodgers side that lost the World Series in five games to the Boston Red Sox.

A four-time All-Star who switched from third base to shortstop last season, Machado had also met in person with the Philadelphia Phillies, the Chicago White Sox and the New York Yankees, who never made a formal offer.

The Yankees have baseball's other $300 million player, outfielder Giancarlo Stanton, who is entering the fifth year of a 13-year, $325 million ($A453.6 million) contract extension he signed with his previous team, the Miami Marlins (Stanton was never a free agent).

The Padres made a similar late splash last February, signing first baseman Eric Hosmer for eight years and $144 million ($A201 million), the largest guarantee to a free agent on last winter's market. Hosmer had one of his least productive seasons, batting .253 with 18 homers, and the Padres finished 66-96, their eighth losing record in a row.

While the Padres still have a threadbare pitching staff, Machado becomes a linchpin to their rebuilding plan.

The team is widely believed to have one of the deepest farm systems in the game. His contract allows him to opt out after the fifth year.

Harper, also 26, was offered 10 years and $300 million by the Washington Nationals just before testing free agency this offseason. He turned it down, and while the Nationals have not dismissed the idea of bringing him back, Harper is known to have drawn strong interest from the Phillies and the San Francisco Giants, among others.