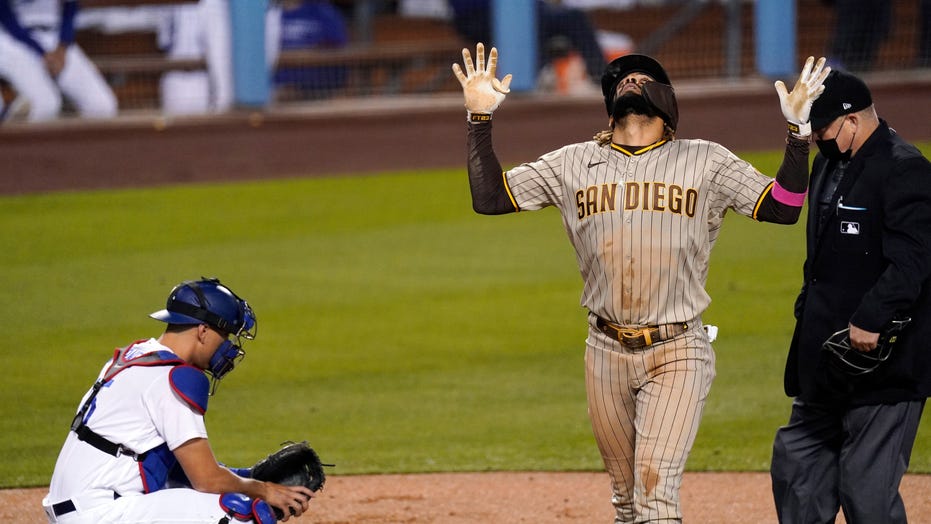 Although Fernando Tatís Jr. was only 3 1/2 months old when his father hit two grand slams in the same inning at Dodger Stadium, the young slugger was well aware his San Diego Padres happened to be in the same park Friday night exactly 22 years later.

“Oh, I definitely knew this was the day,″ Tatís said with a big laugh. “I told myself, ‘If I could just hit two home runs today, that would be so crazy.’ I think the baseball gods were in my favor.”

The baseball gods don’t deserve all the credit for the two hardest-hit homers in the ascendant career of Tatís, who led San Diego’s latest win over its biggest rival.

Tatís launched two solo homers on the anniversary of his father’s most amazing baseball feat at Chavez Ravine during the Padres’ third straight victory over the Los Angeles Dodgers, 6-1.

Tatís celebrated a significant family day in style with homers in the third and fifth off Clayton Kershaw (3-2). After driving in a third run in the ninth, Tatís spoke to his father at home in the Dominican Republic.

“He was really happy,” Tatís said. “He was saying how blessed we are. It’s just been a celebration all the way around in my family. It’s definitely something we’re going to take into our last day in this world.”

Fernando Tatís Sr. famously hit two grand slams for St. Louis off Dodgers pitcher Chan Ho Park in the third inning on April 23, 1999 — a feat that had never been done before, and hasn’t been done since.

The now-22-year-old Tatís’ night wasn’t quite as unique as his dad’s achievement, but his fourth career multi-homer game included balls that left his bat at 113.4 mph and 115.9 mph, according to Statcast. Tatís connected for a 431-foot shot in the third, and followed it with a 419-footer two innings later.

Mookie Betts doubled and scored in the first inning for the major league-leading Dodgers, who have lost four of five amidst a major offensive slump. With four regular hitters now unavailable due to injuries, Los Angeles has scored only 11 runs with a mere 23 hits in its last six games.

“We just have to keep getting baserunners and getting in position to drive runners in,” Dodgers manager Dave Roberts said. “If we keep doing that, we’ll be all right.”

Darvish yielded four hits and a run with nine strikeouts in his second straight outstanding start against LA. Darvish held the Dodgers to one hit over seven innings last weekend, but took a narrow loss when Kershaw threw six shutout innings.

Kershaw pitched seven innings of five-hit ball with seven strikeouts in the rematch, but took his first loss since opening day.

“There were some positive things, but the mistakes tonight found a way over the fence, unfortunately,” Kershaw said.

San Diego also got another game-changing defensive play: The Dodgers put two runners on in the seventh against Darvish, but Manny Machado spectacularly leaped and stretched to snag Betts’ two-out liner to third.

“Absolutely outstanding catch, for sure,” Darvish said through a translator.

DJ Peters made his major league debut for the Dodgers in the ninth inning. The native of nearby Glendora grounded out to third as a pinch-hitter for the final out.

Dodgers reliever Corey Knebel threw just five pitches in the ninth inning before leaving with a trainer. He felt pain in his upper triceps, Roberts said.

Knebel has been a solid addition to Los Angeles’ bullpen, getting two saves in seven appearances. He will undergo tests Saturday, but Roberts is “hopefully optimistic.”

Padres: Manager Jayce Tingler said RHP Dinelson Lamet, on the 10-day IL with right forearm inflammation, played catch. Lamet will likely throw a bullpen next week while the team is in Arizona.

Cy Young Award winners meet for the second time in seven days when Trevor Bauer (2-0, 2.42 ERA) pitches for the Dodgers against Blake Snell (0-0, 4.11) and the Padres. Bauer left with a 2-1 lead after six innings last weekend in San Diego, but the Padres rallied to win that series finale. Snell hasn’t won yet for his new team.