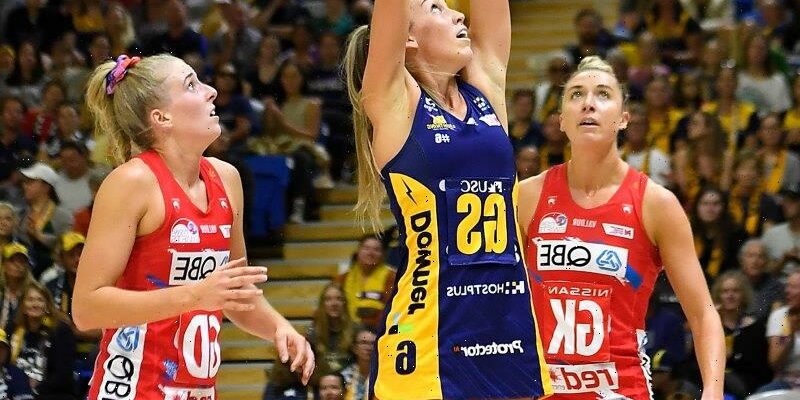 A frustrated NSW Swifts coach Briony Akle has blamed her team’s inability to stick to her game plan for their failure once again to shake the curse of the Lightning’s home court.

The NSW side came up short on Sunday afternoon, this time 58-54, to continue their winless streak against the Sunshine Coast side at USC Stadium that dates back to the league’s implementation in 2017. 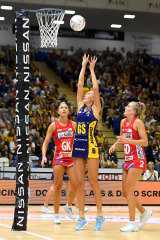 Cara Koenen of the Lightning shoots against the NSW Swifts at USC Stadium.Credit:Getty

“When you identify what the issues are and we don’t stick to that game plan to be able to execute that it’s extremely frustrating,” she said.

“It was very disappointing. We had great patches but when it was terrible, it was terrible. Looking forward to next week; we’ve got lots to work on. Lots of hard conversations and hopefully some good training.”

In the first quarter, Sam Wallace pushed the Swifts level with the Lightning 18-18 after just 15 minutes, despite dropping from her usual 100 per cent shot accuracy. She finished at 92.5 per cent, but the Swifts shooters couldn’t match the Lightning’s success with the Super Shot.

Both teams attempted six Super Shots, with the Lightning coming up with four and the Swifts successful with just two.

Swifts star Helen Housby managed to sink her one Super Shot for the day when it counted, in the dying seconds of the first half to put the Swifts ahead 32-33.

But the Swifts’ desperation proved no match for the crowd on the Sunshine Coast.

Another Housby Super Shot attempt came off the rim and fell into the hands of the Lightning to finish off the game.

The Swifts had walked onto the court on the back foot with co-captain Maddy Proud sidelined after injuring her foot in the final minutes of the Swifts’ fiercely fought 55-43 win over the Vixens last week.

“I wish I could be out there but I’ve got to play it safe so I can be out there next week. I’d much rather be on the court,” Proud said before the game.

The Melbourne Vixens continued their horror start to the 2021 season, losing 54-68 to the Giants on Sunday afternoon for their fourth straight defeat.

It was the first time the Giants had beaten the Vixens in 1092 days. It’s a statistic that shows just how much the Melbourne side are struggling after the retirements of Caitlin Thwaites and Tegan Philip. 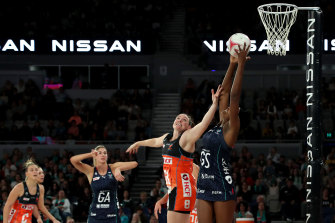 The Giants beat the Vixens for the first time in 1092 days on Sunday. Credit:Getty

The Giants are now four on the trot in their best start to the season since 2017 – a remarkable feat given the side lost their Australian goal attack Kiera Austin to a season-ending knee injury in round one.

“I was on the edge of my seat the whole game. Vixens, they are such a quality club and you know they are going to fight until the very end so you can never feel complacent,” Fitzgerald said.