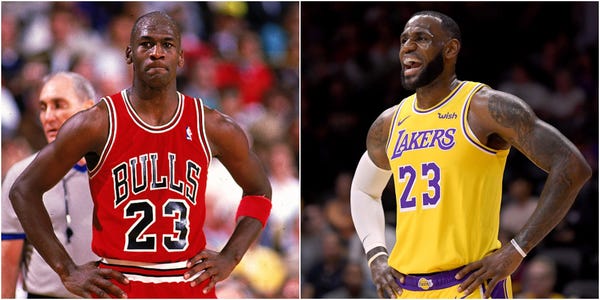 LeBron James will never be as good as Michael Jordan.

That's according to ESPN's outspoken analyst Stephen A. Smith, who says nothing James will ever do will he him surpass Jordan as the greatest NBA player of all time.

"I've got bad news for LeBron James," Smith said on Tuesday. "Consider yourself disrespected, because you will never be my number one."

After winning his fourth NBA title and claiming the Finals MVP award with the Los Angeles Lakers on Sunday, James asked people to give him his "damn respect" when it comes to considering him as the GOAT.

Smith added: "As long as I'm living and breathing, I've got breath in my body and I've got a voice, you will hear me say: LeBron James is no Michael Jordan. Period."

Asked if there is anything James can do to overtake Jordan, Smith said: "Erase the six NBA finals losses."

LeBron has appeared in 10 NBA Finals series' compared to the six Jordan featured in, but has a much lower win percentage. Jordan's Bulls won every Finals they reached, while LeBron has only won four of his 10 appearances.

As well as the difference in the number of the accolades, Smith also believes Jordan played in a much more difficult era than James, which makes Jordan's achievements all the more impressive.

"The eras are so important," he said. "It was so physical. What they were allowed to get away with and do against you defensively, Michael Jordan endured that all."