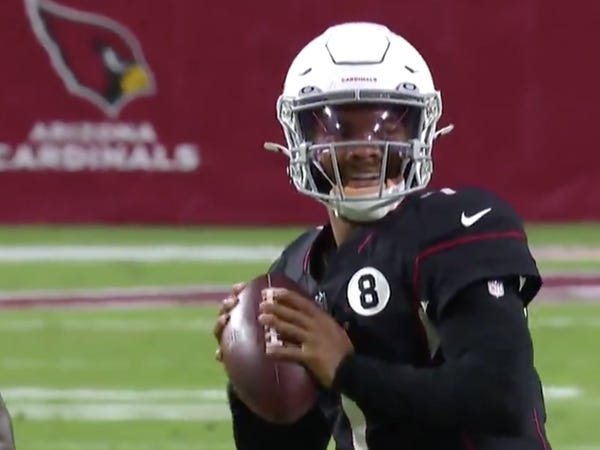 Through seven games as teammates, Murray and Hopkins have connected for 73 receptions, 704 yards, and three scores.

Murray knows what kind of talent he has in Hopkins, and that knowledge was on full display Sunday night during the Cardinals' thrilling game against the Seahawks.

With the Cardinals trailing 10-0 in the first quarter, Murray recognized Hopkins in single coverage and sent a sky-high ball in his direction to the end zone. There was never a doubt that Hopkins would make the play.

While the play is phenomenal, the replay is better.

A camera caught Murray's reaction as he read the play, showing that the Cardinals quarterback literally started smiling as he saw Hopkins get free.

Murray was so eager to take advantage of the Seahawks' defensive lapse he didn't even wait to get his fingers on the laces.

Murray, Hopkins, and the Cardinals won the game in overtime, with Hopkins finishing with 10 receptions, 103 yards, and a score.

If defenses see Murray flash that smile again, they'll know they've made a mistake and that it's already too late to stop him.