Kia Nurse was worried she was hitting too many shots in the warm-up, but it was just a sign of what was to come from the Canberra Capitals guard as she lit up the National Convention Centre.

She finished with a game-high 33 points, including seven three-pointers, in the Capitals' 104-75 win over the Townsville Fire on Friday night. 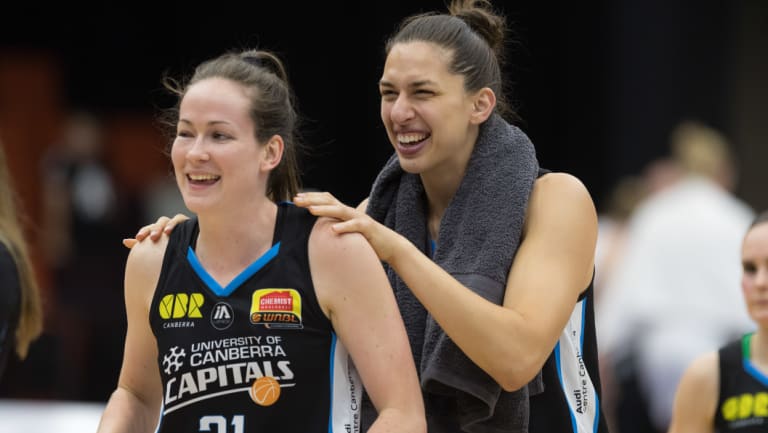 Keely Froling and Marianna Tolo are all smiles after the Capitals’ win against the Fire on Friday night.Credit:Ben Southall

It sent the Capitals to the top of the WNBL, although the Perth Lynx were still to play the late game in Western Australia.

Leilani Mitchell fired the warning shots of what was to come, the Capitals guard hitting consecutive three-pointers to open the scoring for the home team. 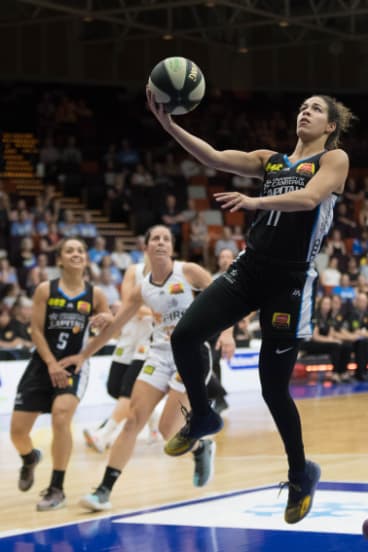 That sparked Nurse into action.

She enjoyed an 18-point first quarter, scoring more than half the Capitals total as they took a 33-18 lead into the first break.

Nurse did most of that damage from outside the three-point arc, sinking four of her five attempts from long range.

The Capitals held a 63-38 lead at the main break and were well on the way to their fourth straight win.

Canberra hits the road to take on the fifth-placed Dandenong Rangers on Sunday.

"Sometimes when I hit shots in warm-up it gets nerve-wracking because you're going to miss the rest of them in the game," Nurse said.

"It was like, 'Oh oh, I hit all my shots today', but it switched over so that was a good sign."

The win was built on a smothering Canberra defence that reduced the Fire to little more than smouldering smoke.

Capitals centre Marianna Tolo was almost impassable and every block, steal and forced turnover was taken advantage of on the break.

Tolo had three blocks, with Lauren Scherf and Keely Froling, sporting a massive shiner, joining in on the fun as well.

They were busy picking the visitors' pockets as well, with almost the whole side getting in on the act, but co-captain Kelsey Griffin leading the way with five.

And they fought hard for every loose ball, with Canberra guard Kelly Wilson leading the way in the with the aggressive stakes in a physical contest.

Laurin Mincy (20 points) and Darcee Garbin (13) were the only Fire players to get to double points on a tough night for the visitors.

Capitals coach Paul Goriss put the defensive pressure down to hard work – it's been their focus over the last four weeks.

He confirmed guard Kristy Wallace had torn her anterior cruciate ligament for the second time.

"She had her scans Thursday night and she's torn her ACL so she'll be out for the rest of the season," Goriss said.

"She'll probably go back home, spend some time with family, come back and have the surgery again."