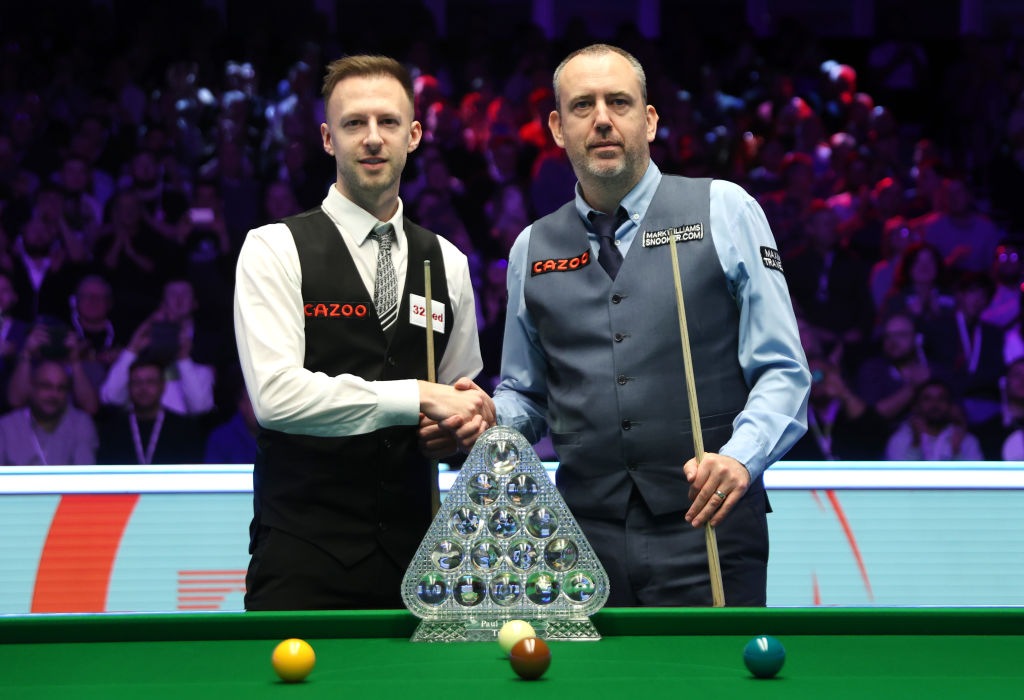 It was a brilliant battle between the left-handers in north London, with Trump taking an early lead, Williams surging back but the younger man regaining control and eventually claiming victory comfortably past 11pm.

Williams would have been the oldest man to win a Triple Crown title if he had got his hands on the trophy for the third time, and looked good to do so at 8-7 up, but Trump denied him to win the event for the second time in four years.

The 33-year-old was rarely at his brilliant best throughout the tournament – beating Ryan Day, Barry Hawkins and Stuart Bingham along the way – but showed some serious scrapping skills, and flashes of excellence to triumph.

‘Incredible really, I got totally outplayed in the whole game, I just tried to hang on,’ Trump told the BBC.

‘I should have been out first round, second round, should have lost this one. I’m like a cat, I am.

‘The way I played this week, not my best, but this is my best ever performance to grind out to win this.’

Williams added: ‘Judd was just a bit too strong for me at the end, I think. I’m not a young man anymore, but I’m still giving these youngsters a run for their money. I can’t quite beat him but I’m getting close.

‘It’s been a brilliant week, I’ve enjoyed it, loved it. I’ve left everything out there, couldn’t give anything more. Congratulations to Judd.’

Williams started the match in perfect fashion, knocking in a break of 138 to win the opening frame, but then strangely struggled for the rest of the first mini-session.

The Welshman missed a string of balls as he lost the next three frames before the first interval, with Trump making breaks of 61 and 106 to lead 3-1.

Things got even better for the Englishman as he made 73 to go 4-1 ahead, but Williams sstopped the rot in style in the sixth, making a round 100, and then made 60 in the next to tighten the scoreline at 4-3 in Trump’s favour.

The final frame of the first session felt big and it was Trump that took it, taking advantage of a poor safety from Williams to make 89 and lead 5-3 ahead of the evening session.

Both were playing well and little changed as they returned for the second session, with the impressive break-building continuing.

Williams took the ninth, Trump the tenth and the Welshman the next two to take the score to 6-6, with a half-century on all four frames of the first mini-session.

It was a scrappier 13th but the momentum was still with Williams as he won his third on the spin to take the lead for the first time since winning the first frame, leaving Judd looking in some bother.

Things got very tense in the 14th which lasted a shade over 57 minutes and both men showing their skill in the safety department.

Williams might be the wiliest of old foxes around, but it was Trump who took it and levelled up again at 7-7.

Typical of the veteran, he didn’t let that draining disappointment get him down and he made a lovely effort of 107 to take the lead again and go two frames from victory.

The Ace joined him on eight in the next frame though as both missed chances and the younger man held his nerve. The final was ticking past 10.30pm by this stage and entering the ‘epic’ class.

He needed a couple of bites at the cherry but Trump was the man to go one away from victory in the 17th, seemingly piling the pressure on the unflappable Welshman.

Trump was feeling strong by this point and finished in style, winning the match with a classy century and getting his hands on the Paul Hunter Trophy for a second time.