The girls are definitely ready. And the fact they've got a female jockey on board in a $2 million race makes it even more special.

All but one of the 16 female owners of Girls Are Ready will be trackside when the filly jumps in the Magic Millions Two-year-old Classic (1200 metres) at the Gold Coast on Saturday. 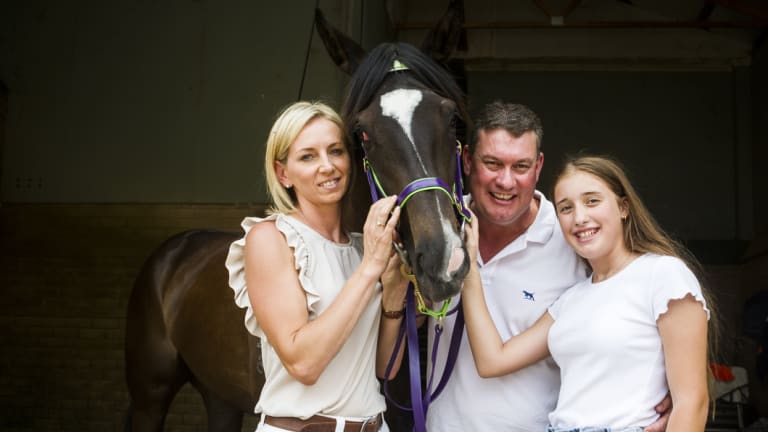 Sharlene, Joe and Maya Cleary have all played their part in getting Girls Are Ready exactly that for the Magic Millions.Credit:Dion Georgopoulos

But the odd one out will be cheering from Canada as the $23 longshot looks to create history – trainer Joe Cleary could become the first son of a Magic Millions-winning trainer to win the Classic.

His father Frank won it with Clan O'Sullivan back in 1992, having already won Canberra's Black Opal Stakes and run second in the Golden Slipper earlier that year.

Enough about the men – although Sharlene Cleary did say her husband Joe had done a great job getting their filly ready for the big race.

If the $2 million wasn't enough, they're also racing for a $325,000 bonus for the first all-female-owned horse across the line.

Has Sharlene Cleary let herself dream of what could be? Maybe just a little.

"I've been managing 16 very excited ladies … I feel like I'm part of something huge," Sharlene said.

"I think she's going to put in a really courageous run. I think she'll be thereabouts to be honest. I don't think she knows how to run a bad race.

"She's come on since her last start … so everything's looking quite positive."

This chance to race on one of the richest race days in Australia has been a few years in the making.

Not only has the daughter of Better Than Ready had to de well enough to qualify for the $2 million race – winning two and finishing third in her three starts – but Sharlene said they also had to find enough interest from prospective female owners to make it viable.

It's been a plan a few years in the making that she said Joe's recent success had helped come to fruition.

She's even went part-time in her public service job to help run the financial side of the business 18 months ago.

"Initially when we bought her [for $30,000] she was cheap enough that we thought we could syndicate her as a ladies horse," Sharlene said.

"We didn't want an expensive horse being a first horse for most of these women.

"When the incentives first came out we thought, 'Wow what about that', but we just wouldn't have had enough interest at that time … but it was always in the back of our mind."

Making it even more special is the fact they have a female jockey on board.

Jess Taylor is the only female hoop in the race and Cleary said there was never any doubt she was going to get the ride, having been on Girls Are Ready throughout her young career.

"There was never any consideration to put anyone else on," Sharlene said.

"When Jess came to ride her her first start at Canberra she came down just for that one ride and then she had to ride at Canterbury that night."

Sharlene's not the only Mrs Cleary in Girls Are Ready's ownership group – Joe's mother Sue is also involved.

To complete a family trifecta, Joe's daughter Maya did the honours at the barrier draw on Tuesday.

Maya was trackside at Warwick Farm when Girls Are Ready bolted to victory last month to ensure her spot on the Gold Coast.

Sharlene said barrier 10, which looks like becoming nine when the emergencies are removed, was perfect.

"It was very, very exciting because we were chauffeured in from the sales complex into the barrier draw," she said.

"Her name was on the side of the car and our colours. Maya was very excited. I thought she might be nervous because she's 12, but she just took it in her stride.

"She drew the right barrier so that was a bonus."

If she wins, the girls are definitely ready, but will the Broadbeach Bowls Club be? That's where the clan will descend after the race, win, lose or draw.