The Victorian Jockeys Association will not call for racing authorities to ban the use of the whip, after leading thoroughbred owner Lloyd Williams declared the instrument should be outlawed in Australian racing. 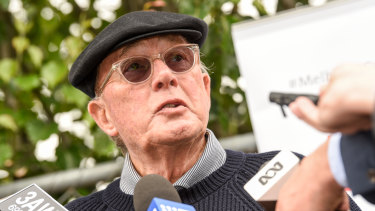 Lloyd Williams has won the Melbourne Cup a record six times as an owner. Credit:Justin McManus

He said Racing Australia whip rules, last amended in 2015, were appropriate in both animal welfare and in the penalties they provided for breaches.

"The number of times the rules are broken is minimal given the overall number of runners. Penalties are fines and suspensions, and used appropriately and keeping within the rules, we support the use of whips in races. They're heavily padded and designed to make a loud noise when used. There's no evidence they cause a form of pain to the horse."

Racing Australia rules state a jockey may whip a horse no more than five times before the final 100m of a race.

A jockey may then whip a horse "at his/her discretion" in the final 100m of a race, however stewards could in theory charge a jockey for using a whip too often in the final stages of a race. This rarely happens.

A jockey must also not use the whip if "[it is] forward of his horse's shoulder or in the vicinity of its head, or using an action that raises his arm above shoulder height, or when his horse is out of contention, or when his horse is showing no response, or after passing the winning post, or causing injury to his horse, or when his horse is clearly winning, or has no reasonable prospect of improving or losing its position, or in such manner that the seam of the flap is the point of contact with the horse, unless the rider satisfies the stewards that this was neither deliberate nor reckless".

The Australian racing industry has been under pressure over its animal welfare practices since a 7.30 story aired last week showing retired thoroughbreds being slaughtered.

Williams and Racing Victoria have been contacted for comment.