Microphone will return to Sydney to tackle the Skyline Stakes at Randwick after dominating his rivals up the straight at Flemington on Saturday.

The two-year-old was hardly tested, sprinting clear at the 200 metres to defeat Talented by two-and-a-half lengths with the field strung out behind him.

Trainer James Cummings said Microphone would now go back to Sydney after two wins and a second in his three starts in Melbourne and contest the Skyline Stakes at Randwick. 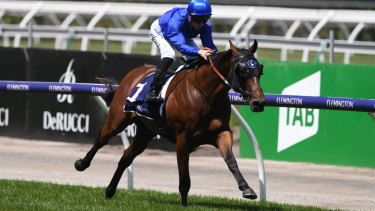 Depending on his performance in the group 3 race he could progress to the Golden Slipper at Rosehill in April.

"The beauty of these horses I am bringing to the races is they have got plenty of upside," Cummings said.

"He will lap up the six furlongs there without the pressure of a jam-packed group 1 field."

Cummings said he was learning about his crop of two-year-olds each time they ran out on the track and said Microphone's performance was more about talent and a basic level of fitness than him being primed for a particular race.

He said the horse would only improve on whatever he achieved in his two-year-old season.

The win of Microphone completed an early double for Cummings and jockey James McDonald, with Intuition taking out race three.