As the Covid-19 pandemic surged in March, Formula 1 looked set to be one of the hardest-hit sports.

Unlike domestic championships and events, Formula 1 was meant to race in 22 countries this year, starting with the Australian Grand Prix in March.

But when the race in Melbourne was canceled with two days’ notice, Chloe Targett-Adams, the sport’s global director of race promotion, felt Formula 1 was “heading into the eye of a storm.”

More race cancellations followed as global air travel slowed and countries introduced restrictions. Teams shut down and waited to hear when the season would begin.

“It was clear to us, the sport had to return,” Targett-Adams said. “This isn’t just the financial revenues that we generate from it. It’s people’s livelihoods. There are thousands of people involved globally in the sport of Formula 1.

“To continue, we had to return to racing.”

Management spent the months of lockdown understanding the measures that would have to be put in place to return. With seven teams based in England, two in Italy and one in Switzerland, a Europe-centric calendar became a potential solution, with races mostly taking place without spectators.

“It was a huge challenge to think about how we could return to racing safely,” Targett-Adams said.

The season eventually began in Austria in July, with strict Covid-19 testing in place and drivers and workers confined to bubbles.

The testing and tracing protocols have been widely praised. “The system seems to work,” said Sebastian Vettel of Ferrari. “We seem to be able to track people who get infected and take the right precautions to make sure the virus doesn’t spread.” 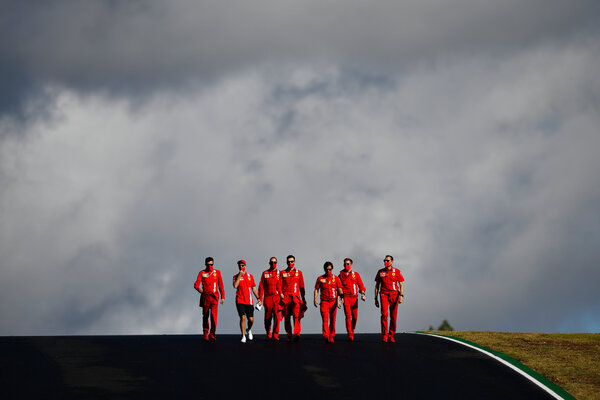 Knowing it could race safely, Formula 1 began expanding its calendar.

At a minimum, 15 races were required to maintain the normal level of income from television partners, which are a crucial source of revenue for the sport. The majority of the revenue is then paid out as prize money, helping fund the teams.

The sport had to be creative to fill out the calendar. Tracks in Austria, England and Bahrain agreed to host two races on consecutive weekends, ensuring that the Formula 1 paddock could stay safe in one place and minimize travel.

Former venues, such as Imola, Italy, and the Nürburgring in Germany, were added. Circuits in Europe like Mugello in Italy and Portimã in Portugal hosted grands prix for the first time.

The new circuits proved popular. “I really enjoyed the new tracks that were not planned this normal season,” Charles Leclerc of Ferrari said.

“It is a bit weird to come to the track and not see any fans in the grandstands, but in the situation that we’re in, I think they’ve done the best job possible. It was great to be able to race.”

“No one could expect it in April, that we could put together a season of 17 races this year,” said Andreas Seidl, team principal of McLaren.

“The way this has been done, in a very safe way, which is obviously the most important thing, to protect our people, was excellent.”

Günther Steiner, team principal of Haas, said it was amazing that Formula 1 pulled it off. “We kept the sport going. It could have been a lot worse.”

Formula 1 is hoping to have a 23-race calendar in 2021. But reflecting on 2020, Targett-Adams said there would be a sense of pride and relief once the checkered flag flew in Abu Dhabi on Sunday to signal the end of the season.

“It’s going to be a big sigh of, ‘Wow, that actually happened’, because I think we’ve been on tenterhooks at various points,” she said.

“We were the first international sporting competition to return,” she said. “That achievement is something we should all be hugely proud of.”