A Euro 2020 final delayed first by the pandemic and then by extra time ends with an Italian celebration on the field at Wembley. 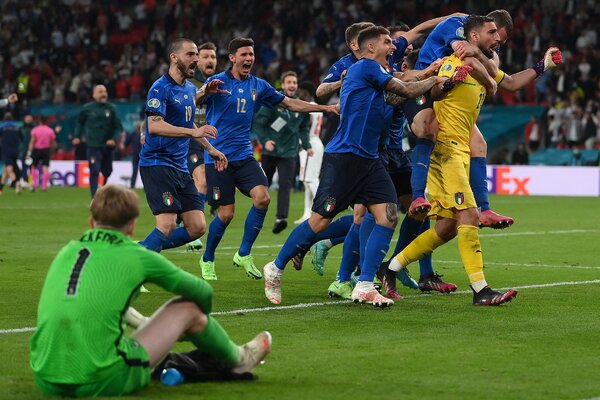 And just like that, it was over. For more than two hours, Wembley Stadium had been simmering, waiting to explode, waiting for its moment. It had been, by turns, boisterous and electric and anxious and fretful. But the sound it will remember, in the years to come, was the loudest of all: the great exhalation of England’s sorrow.

There were points during Sunday’s European Championship final, during an evening 55 years in the making, that it all felt like a dream. In those first few minutes, when Luke Shaw scored and England led, when Italy seemed struck dumb by the noise of the stadium and the power of Gareth Southgate’s England team, when it felt as if destiny was calling.

Slowly, reality started to reassert itself. England ceded control, and Italy seized it. Leonardo Bonucci clawed in a tying goal in the second. The game drifted to extra time. England had been waiting for so long, and it would have to wait a little longer. Penalties loomed. For victory, England would have to confront all of its ghosts.

Even then, there was nothing straightforward. Andrea Belotti missed for Italy, but so did Marcus Rashford for England. And then, as though the spell was broken, everything started to fall apart. Jadon Sancho missed. Jorginho could have won it for Italy, there and then, but there was one final twist:

And so up stepped Bukayo Saka, the least experienced member of Southgate’s squad, a 19-year-old player who was not born in 1996, when England last suffered like this here. Saka walked slowly, deliberately, calmly to the penalty spot. In front of him was a wall of fans, hoping and praying and waiting for the moment. But Saka missed, too.

And just like that, all of that energy, all of those dreams, evaporated into the night sky. Italy was the champion of Europe. England’s wait goes on.

Just when it was supposed to be over, it was not.