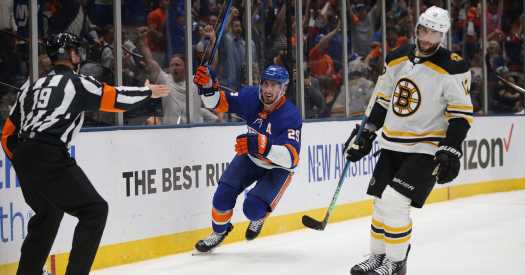 Two weeks after they won their first-round series before a similarly cacophonous crowd at Nassau Coliseum, the Islanders had a chance for another series-clincher game at home.

They did not disappoint, as the Islanders finished off the Bruins with a 6-2 win in Game 6 of their second-round series.

The Islanders broke a 1-1 tie with three second-period goals, two by Brock Nelson and one by Kyle Palmieri. Semyon Varlamov, who entered play with a .925 goals-against average, had another stellar game with 23 saves. The Islanders added two empty-net goals in the third period.

The Islanders reached the semifinals for a second straight season and will again face Tampa Bay. Last year, the Lightning beat the Islanders in six games before defeating Dallas to win the Stanley Cup.

The 2020 series played out in a bubble environment in Edmonton, Alberta, but this year’s showdown will be the first semifinal on Long Island since 1993. Tampa Bay advanced after beating the Carolina Hurricanes in five games.

“It’s a great opportunity seeing them again in the semifinals,” said Josh Bailey, an Islanders forward who had two assists. “We’re really looking forward to it.”

Travis Zajac opened the scoring at 8 minutes 52 seconds of the first period, putting the puck past Bruins goalie Tuukka Rask.

Zajac, 36, who with Palmieri was a late-season acquisition from the Devils, sent the Coliseum crowd into a frenzy with his first goal of the postseason.

Zajac had played his entire career, more than 1,000 games, for the Devils before the trade and had replaced the injured Oliver Wahlstrom in the lineup for the final game of the opening-round series against the Pittsburgh Penguins.

Boston’s Brad Marchand scored both goals for the Bruins on power plays, one at 17:36 of the first to tie the game and the second in the third period.

But the Islanders — whose previous five wins this postseason came after they had allowed the opening goal — played with resolve and determination at even strength, forcing the Bruins to the perimeter and fiercely protecting the space in front of Varlamov.

“It was just a great team effort,” Zajac said. “We had contributions from everyone. It was an electric atmosphere and I liked the way we battled.”

He added: “It was nice to play with the lead.” 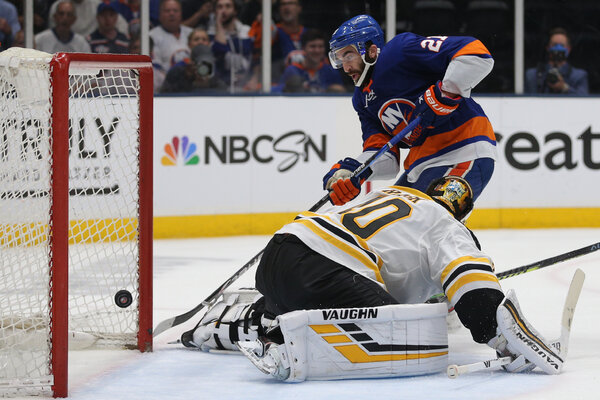 Nelson scored his fifth goal of the playoffs at 5:20 of the second period with assists from Bailey and Nick Leddy and then gave the Islanders a two-goal cushion at 12:39. Palmieri scored his team-best seventh of the postseason at 16:07, putting the Islanders up by three.

Hours before the pivotal Game 6, Andy Greene — acquired late last season by the Islanders — marveled at the chance to play with his former Devils teammates in such high-stakes games.

“You have to know the moment at hand and embrace it,’’ said the 38-year-old Greene, who had also been a career Devil before the trade. “It’s been great playing with Trav and Palms and being on a run. It’s been cool to be able to share it with them.”

Now the three former Devils — who were all acquired by Lou Lamoriello, their former boss in New Jersey, who is now the team president and general manager of the Islanders — will play on.

And a season in which the Islanders played their first home game with no crowd against these same Bruins will continue with 12,000 fans waving orange towels while chanting and singing in the last games of the Coliseum.

“As we started to have fans back with everyone getting vaccinated, it’s giving it a lot more meaning,” Islanders Coach Barry Trotz said. “It’s a great feeling.”