For any elite athlete, a death in the family around grand final time is one of the worst scenarios imaginable. For NSW Swifts shooter Sam Wallace, it has become almost commonplace.

On Wednesday, Wallace’s teammates were on court training for today’s Super Netball grand final.
And while Wallace wished she could have been there, instead she was watching via video call as her aunt was laid to rest at home in Trinidad and Tobago. 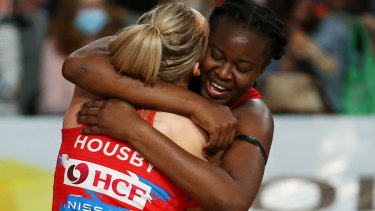 ″⁣My cousin video-called me while was the service was going on. So I still felt a part of it, even though I am miles away,″⁣ she said.

Wallace found out about her aunt’s death last week, just two days before the Swifts’ major semi-final. She played the match, helping the Swifts to a thrilling one-point victory which booked their place in the grand final.

Many encouraged her to sit out the clash, but she declined. After all, Wallace is no stranger to dealing with loss around the finals.

In 2019, just days after the Swifts took out their second premiership, Wallace’s father died following a series of strokes. Wallace wanted to return home after his first stroke, but her father pushed her to remain in Australia to keep playing. A year earlier, Wallace lost another aunt during the 2018 season.

“When I heard the news [about her aunt last week] I just thought, ‘I can’t catch a break’,” she said. “It’s been a rollercoaster. But God has given me the strength.“

Wallace is seeing her aunt’s death as a sign. As much as she wants to make this entire season worth her struggles, she believes the tragedy is the result of something greater at play.

“I told one of my teammates today, in 2019 my father lived to see the grand final and passed some days after that,” she said. “Now, in 2021, my aunt passes away before we go into the grand final. I’m like, ’Is this a sign?‴⁣⁣

Wallace is one of the most bubbly sportspeople you could ever meet. She has a smile so infectious it can instantly shift the mood of her team, even after a heavy defeat.

Wallace’s calm, but positive energy is one of the integral reasons the Swifts have done so well during a horror COVID-19 season, which saw the team relocated four times in just a month. Today, she’ll be taking her calm, but sassy, energy onto the court – two traits, she says, have been handed down by her father and aunties.

“Having a death in your family is something I would never wish upon anybody, especially when you can’t be there to say a final goodbye,” she said. “But at the end of the day, this is my bread and butter and this is my job. As tough as it is to be away from family and loved ones during this time, this is what I’m getting paid for.”