Philadelphia has the Big 5. The state of Iowa has the Big Four — an informal confederation of Division I basketball programs, linked by geography, passion and the never-ending pursuit of bragging rights.

The four-way rivalry was kindled in the late 1970s when the University of Northern Iowa joined Division I. For decades, Iowa and Iowa State, the major conference stalwarts, annually scheduled games against the midmajors Drake and U.N.I., alternating home sites each year, before the programs began playing a four-team doubleheader in Des Moines in 2012. The games are usually competitive, and fans relish them.

Darian DeVries, who is Drake’s first-year coach and who grew up in the small northern Iowa town of Aplington, attended a memorable Big Four game in 1990 with his father, Vern, and younger brother, Jared (a future Detroit Lions defensive end). They were among 22,791 packed into the U.N.I. Dome as the Panthers and their high-scoring star Jason Reese upset the 20th-ranked Hawkeyes, 77-74, on the way to the program’s first Division I N.C.A.A. tournament berth.

“I’m not sure we could see anything, but it was the most incredible sporting event ever,” DeVries said after a recent Bulldogs game in Minneapolis. “That was my greatest memory as a kid.”

But the chance for additional memories is about to end, for the foreseeable future at least, as these cherished games seemingly fall victim to the larger programs’ concerns about upsets and not making the N.C.A.A. tournament — an approach that is bound to make it harder for midmajors everywhere to get to the tournament, too.

This year’s version of what is now known as the Hy-Vee Classic at Wells Fargo Arena in Des Moines, scheduled for Saturday, will be the last, ending a seven-year run. (Hy-Vee is a Midwest supermarket chain.) Earlier this year, Iowa announced it was withdrawing from the event. The move blindsided the other programs and, beginning in 2020, could have significant impact on which teams make the N.C.A.A. Division I men’s basketball tournament, whose selection committee likes so-called midmajors to have upsets of bigger programs on their résumés.

Iowa appears uninterested in scheduling U.N.I., a strong midmajor with four N.C.A.A. tournament appearances since 2009, or Drake, a rival dating to 1909. And fans statewide, like Steve Nyquist, a Drake alumnus and Bulldogs season-ticket holder from Des Moines, are angry.

“Almost all decisions come down to money,” Nyquist said during a recent Drake game against North Dakota State at U.S. Bank Stadium in Minneapolis. “That’s my cynical belief, anyway,”

Money certainly was part of it. Hawkeyes Athletic Director Gary Barta exercised a clause his university had demanded as a condition for extending the Classic — originally called the Big Four Classic — through 2019. The clause permitted a team to opt out if its conference required 22 contracted games. This season, the Big Ten Conference schedule expanded to 20 games from 18. That, plus crossover games with the Big East and Atlantic Coast Conferences, brought Iowa’s total to 22.

Barta declined an interview request from The New York Times. In a statement released when Iowa announced its decision, Barta was quoted as saying that the new conference requirements “created some scheduling challenges that impacts this event” and that future games with in-state programs would be considered case by case.

“Our fans are certainly upset,” said Northern Iowa Athletic Director David Harris, who was formerly the senior associate athletic director at Iowa State. He said the U.N.I. faithful would really like to return to the home-and-home schedule, which probably is not going to happen, either. “That doesn’t appear to be in the cards right now.” 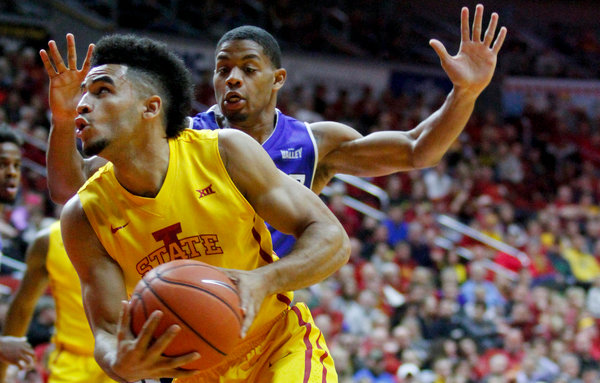 Iowa and Iowa State, which plays in the Big 12, meet every year in a nonconference series that dates to the 1970s, alternating home sites. There are no plans to discontinue that series.

The Big Four/Hy-Vee Classic began because Iowa and Iowa State refused to continue playing at U.N.I. or Drake, whose arenas seat about 7,000, significantly less than Carver-Hawkeye Arena at Iowa (15,400) and Hilton Coliseum at Iowa State (14,384). Power 5 programs load up on nonconference games at home, paying opponents guarantees of up to $100,000 for the privilege — so-called “buy” games that they usually win.

Drake Athletic Director Brian Hardin, who grew up in Des Moines rooting for the Bulldogs as the son of two Drake alumni, said football had replaced basketball as the dominant sport in Iowa. “While this isn’t the major reason why, I can’t imagine that the fact that the four division schools are not playing each other is going to help bring basketball back to the prominence it once had in our state,” he said. “And that’s disappointing.”

Hardin has reached out to Iowa’s Barta and Iowa State Athletic Director Jamie Pollard, hoping to get back on their schedules. Pollard declined an interview request, but an Iowa State spokesman said the team hopes to keep playing Drake and U.N.I.

It may not be easy. Drake and Iowa State have met 174 times since 1908, but Hardin is not keen on the Bulldogs’ going to Ames every year, which Iowa State might insist on.

Harris, the U.N.I. athletic director, said his team had not decided whether to pursue future games with Iowa State or Iowa. Drake and U.N.I. meet twice a year in Missouri Valley Conference play.

U.N.I. may be a victim of its own success. Under Coach Ben Jacobson, U.N.I. has a history of upsetting top teams, making it an unpopular opponent. The Panthers knocked top-seeded Kansas out of the 2010 N.C.A.A. tournament, stunned top-ranked North Carolina at the McLeod Center in November 2015 and beat Iowa and Iowa State in the Classic in consecutive years.

Jacobson said U.N.I. was already struggling to schedule quality nonconference games, which are crucial to gaining at-large N.C.A.A. tournament consideration. The demise of the Classic does not help.

“The Power 5, and maybe a league or two after that, they’re going to play most of their games against each other,” said Jacobson, who foresees a tougher road to the tournament for his program and for Drake. “That’s what is bothersome.”

But basketball fans in Iowa might just need to be patient.

Seven years ago, four Division I programs in Indiana — Notre Dame, Butler, Purdue and the Hoosiers — revived a two-game showcase that disappeared in the 1940s, known then as the Hoosier Classic and now called the Crossroads Classic. And in Philadelphia, even the Big 5 fizzled for eight years in the 1990s, when Rollie Massimino, then Villanova’s coach, stopped scheduling the other teams every season. Steve Lappas succeeded Massimino and restored full round-robin play in 1999.

For now, the state of Iowa awaits its Steve Lappas.