LAS VEGAS — Late last season, as his Atlanta Braves surged to a division crown nobody else seemed to want, Manager Brian Snitker took pride in the youthful buzz throughout his dugout.

“It was like an American Legion team — the energy, the excitement, pulling for each other, caring about each other,” he said. “It’s a team that the city should be excited about watching because they’re very entertaining.”

It was not quite like this for their division rivals in Washington, New York, Philadelphia and Miami. The Nationals flopped in Bryce Harper’s final season before free agency. The Mets teased their fans with a fast start, then quickly faded. The Phillies fell apart down the stretch. The Marlins finished last, as expected, but Snitker figured the others would act quickly to rebound.

“When the playoffs were over,” said Snitker, whose team lost a division series to the Los Angeles Dodgers, “I was sitting around like, ‘Those other teams aren’t going to sit on their thumbs all winter. They’re going to get better, they’re going to do things to improve their clubs.’ And us included.”

While the winter meetings here in Las Vegas have mostly lacked the sizzle of the setting — no risky bets or reckless gambling — you cannot blame the National League East, whose top four teams had been busy well before checking into the Mandalay Bay Resort and Casino at the start of the week. 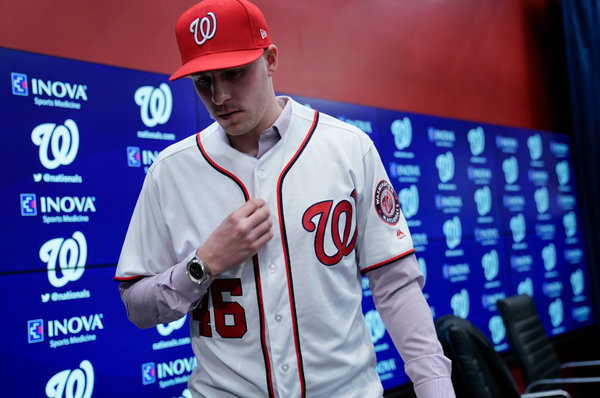 The Marlins unveiled yet another new color scheme (“caliente red, Miami blue, midnight back and slate grey,” they call it) while shopping their best player, catcher J.T. Realmuto. Still, the N.L. East may be the only division with at least four teams building for 2019 instead of standing still or tearing down.

“If we’re not playing in a division that’s competitive, I don’t think it’s nearly as much fun for us to do our jobs,” said Brodie Van Wagenen, the Mets’ new general manager. “I want to have a little bit of adrenaline flow when I feel like I’m trying to win something. I wake up every day with a competitive spirit and I want to be better than the guys in our division.”

The Mets are not shopping in the upper tier of free agency, but several players who interest them have been meeting with teams here, including catcher Wilson Ramos and outfielder Adam Jones, who both hit right-handed, like A.J. Pollock, another outfielder the Mets like. The Mets want to balance their left-leaning lineup while upgrading their catching and bullpen, without creating still more holes in their roster.

The Mets beat out the Phillies for Diaz, the prized closer the Seattle Mariners attached to the expensive Cano to extract top prospects (while also taking on Jay Bruce and Anthony Swarzak) from the Mets. The Phillies are still pursuing a free-agent closer, with Zach Britton a top target.

For all of Harper’s accomplishments — six All-Star appearances, a Most Valuable Player Award, a career .900 on-base plus slugging percentage — the Nationals never won a playoff series with him. They traded starter Tanner Roark to Cincinnati on Wednesday for reliever Tanner Rainey but have plowed $525 million into contracts for starting pitchers Max Scherzer, Stephen Strasburg and Corbin. Two dynamic young outfielders — Juan Soto, 20, and Victor Robles, 21 — could help cover for the possible loss of Harper.

“If he’s not back, I like the way we’re set up — we’re super athletic, we’ve got young, exciting players,” Nationals Manager Dave Martinez said Tuesday, calling the Corbin signing an early Christmas present. “Adding Patrick Corbin, with Scherzer and Strasburg, those are three pretty good horses.”

Harper and shortstop Manny Machado are the prizes of another slow-moving free-agent class. The Phillies’ owner, John Middleton — whose net worth is said to be around $3 billion — has said he would be “a little bit stupid” about spending money this winter. Boras or Machado’s agent, Dan Lozano, seem poised to take him up on it.

“I’ll be honest with you, if, in a life and in a career, I looked at where John is, I would really like to be that stupid,” Boras said.

Boras has negotiated some of his most lucrative deals in January and February, and the Harper talks — like those for Machado — could drag. Phillies General Manager Matt Klentak said this week that the team would not “be held hostage by one or two players,” to which Boras responded Wednesday with a warning of sorts.

“In the end, all organizations are going to look back on this opportunity, and they’re going to say, ‘What should I have done? What steps should I have taken?’” Boras said. “These are pivotal moments. There’s a lot of organizations and general managers who will be evaluated about what they did do or what they didn’t do when you have the availability of a player like this.”

Boras has not conceded that a different Eastern team — the Yankees, in the American League East — is truly out on Harper. Yankees General Manager Brian Cashman has dismissed the possibility of signing Harper, because his outfield is already crowded and because he is unmoved by Harper’s offer to learn first base.

Yet Boras is undeterred. He cited the Yankees’ surprising late strike for first baseman Mark Teixeira 10 years ago, and counted them in again with an amusing analogy, a rite of every winter meetings.