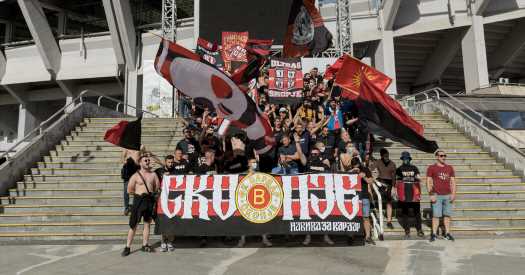 Goran Pandev’s face is everywhere in Strumica, a sleepy city tucked away in the corner of North Macedonia, not far from the borders with Greece and Bulgaria. It is on the banners around the field at the local stadium. It is painted on the walls of the changing rooms. It beams out from the television screens of dozens of cafes, which faithfully broadcast every game played by the striker’s Italian club team, Genoa.

Strumica has produced presidents and prime ministers, but it is Pandev it holds closest to its heart. He has repaid that affection. Plenty of the players who leave North Macedonia for fame and fortune in western Europe’s most glamorous soccer leagues invest in businesses at home. Eljif Elmas, a midfielder for Napoli, often returns to the family pastry shop in the capital, Skopje. Boban Nikolov, who plays for Lecce, helped his father open a transport company in the city of Stip.

Pandev’s only rival for the title of the country’s greatest-ever player, Darko Pancev, runs a cafe in Skopje named after the jersey he wore during his career: Café 9. 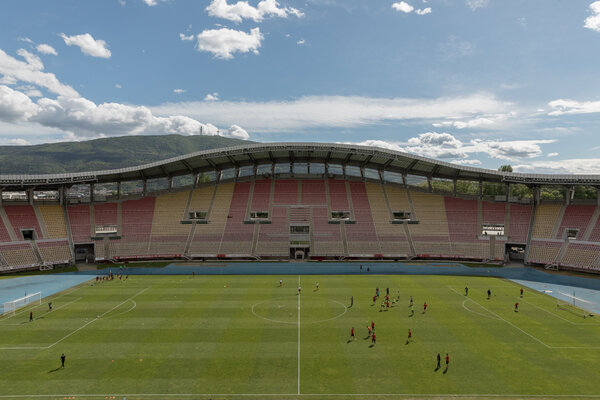 “Here, it is common for former footballers to open a cafe or restaurant and sit there all day,” said Mario Sotirovski, the soccer editor of the newspaper Vecer. “Pandev is different.”

For more than a decade, he has funded an eponymous soccer academy here, training 300 young hopefuls at its spectacular, Italian-inflected campus in the city, as well as 1,000 more across the country. “He is an idol for all the kids,” said Jugoslav Trenchovski, Akademija Pandev’s director.

The facilities available at the academy — there are plans to open a sports center by the end of this year that will include a hotel, a spa and a museum — make it an outlier in North Macedonia. Other than the million-dollar national training center, largely financed by FIFA, that opened its doors in 2018, the country’s soccer infrastructure is largely threadbare. Most stadiums only have one grandstand. Capacities rarely exceed 4,000.

Pandev’s greater impact may not be in concrete and steel, though, but in something far less tangible. In November last year, the striker — at 37, he is older than the country he represents — scored the goal in a qualifying game against Georgia that assured North Macedonia a place in this summer’s European Championship. It was, he said at the time, “a great victory for our people.”

In North Macedonia, the significance of qualifying for its first major tournament extended far beyond sport. “From now on, the whole world will know where our country is,” said Muamed Sejdini, the president of the Football Federation of Macedonia. “When I talk to people from abroad, I will no longer have to explain that we border with Serbia, Albania, Bulgaria and Greece.”

But it is more than a matter of national pride. In 2019, after two decades of dispute with the last of those neighbors and a contested referendum, the country changed its name: from the Former Yugoslav Republic of Macedonia to North Macedonia. By placating Greece, the country hoped to remove the first, and most daunting, obstacle in its path to joining the European Union.

Now, two years later, there is a belief that its case can only be strengthened by playing in the Euros. “These players have raised the bar a lot,” said Sase Gjoles, the lead singer for the band Vis Risovi. “There is no going back. It is a message for the new generation.” Gjoles has written a song to support the team during the tournament. Its chorus runs: “Let’s go to Europe, the place where we belong.”

That sense of unity is important. Around a quarter of North Macedonia’s population is ethnically Albanian, separated from the Macedonian majority by its language and its predominantly Muslim faith. “None of us supports Macedonia,” said Arijan Murtezani, a graduate student. “It’s our country and we respect it, but we also love and honor our national heritage, which is Albanian.”

Murtezani is a member of the Ballistët, an ultras group that supports Shkëndija, a team in the largely Albanian city of Tetovo. Shkëndija — spark in Albanian — plays in red and black, the colors of the Albanian flag, and was banned in the latter years of Communist rule amid concerns its popularity might stoke nationalistic fervor.

Many of the teams in Macedonian soccer are defined by their ethnic ties, and violence between ultra groups can run along those lines. In June 2018, a Vardar Skopje fan was killed in broad daylight at a bus stop; two fans of Shkupi, a team from an ethnic Albanian neighborhood in the capital, ended up in prison.

Sejdini, the soccer federation’s president, said he hoped that the team’s European Championship campaign will help unite the country under one flag. There is an initiative among ultra groups to form a united front to support the national team, under the name Falanga — the phalanx. The words refers to the military formation invented by Philip II of Macedon, the father of Alexander the Great, two millenniums ago.

The team, certainly, reflects North Macedonia’s complex, interwoven fabric. Some of its stars are ethnically Albanian — Ezgjan Alioski and Enis Bardhi — and some, like Nikolov, are Macedonian. Elmas, a winger for the Italian team Napoli, is of Turkish descent. The hope is that they can help to forge an identity for the country, one that is not only projected externally, to Europe, but internally, too.

Still, it was fitting that, when North Macedonia took the field in a major tournament for the first time in its brief history, its first goal — in a 3-1 defeat to Austria on Sunday — came from a familiar face; the most familiar face of all, the one that hangs on banners and is painted on walls and beams out from televisions across Strumica. Goran Pandev has spent a decade trying to change soccer in his country. With one strike, he might have changed his country through soccer.