BUENOS AIRES — When Zaira Mauas, a lifelong fan of the soccer club River Plate, stepped inside the Monumental stadium two weeks ago, she could barely contain her excitement.

“I was going crazy — I had a level of anxiety and nerves that is difficult to explain,” said Mauas, a 35-year-old travel agent who was among the tens of thousands of River fans who had been fortunate to obtain a ticket for the second leg of the Copa Libertadores final against archrival Boca Juniors. “I was so happy and had an incredible amount of adrenaline.”

The day didn’t go as planned. Boca’s bus was attacked by River fans, its players were treated for injuries from broken glass and drifting pepper spray, and the game’s kickoff was delayed several times. Mauas wound up seeking medical assistance after sitting for hours in the sun waiting for the match to start. It never did.

After the game was postponed for a second time the next day, South American soccer authorities decided the long-anticipated final between these two Buenos Aires teams would not be played in Argentina at all. Instead, they announced that it would be moved to Spain.

Last month, the prospect that the final of Copa Libertadores, the most important club tournament in the Americas, would be decided by Boca Juniors and River Plate, Argentina’s most heated rivalry, had turned Buenos Aires upside down. Now, with the final set for Sunday in a stadium 6,000 miles from here, there seems to be far less enthusiasm for the match.

For Mauas, whose anticipation for the showdown was so all-consuming that she and her sister agreed to get matching River tattoos when it was all over, the emotional appeal is gone. 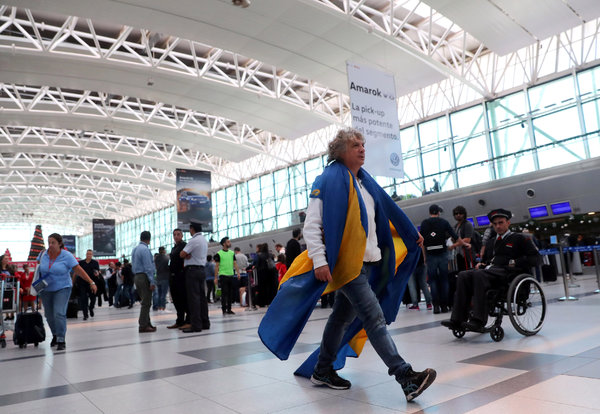 Her sister is now having doubts about that tattoo, Mauas said, and earlier this week she joined hundreds of fans at the Monumental to protest the decision to play the game in Madrid.

“It’s super unfair that they take away the possibility of living this in our stadium,” she said. “Boca had its chance” — the first leg ended in a 2-2 tie at Boca’s La Bombonera stadium — “and we have the same right.”

“You can’t play a final of the Libertadores Cup in Spain,” she added. “It’s crazy.”

Mauas said she would still watch the match, of course, but said she did not feel “even 10 percent as excited” as she was two weeks ago. And she is hardly alone.

Matías Sonzini Astudillo, 24, said he could barely stop thinking about the final in the weeks before the first leg.

“Two weeks ago I kept thinking that I didn’t know what I would do with myself if we lost,” said Astudillo, a River Plate supporter. “Now, whether we win or lose really doesn’t change anything for me.”

Agustín Nacarato, a 35-year-old lawyer, canceled all his plans two weekends ago so he could be in front of the television and follow every single moment of the match that had been hyped as “La Final de Todos los Tiempos:” the final for all time.

Now, he is not sure he will tune in.

“I wouldn’t feel like I’m really missing much,” Nacarato said, explaining that he has plans with friends for Sunday and will only change them if it is by consensus. “This was once a match that was undoubtedly a final. Now it doesn’t feel that way.”

Sam Kelly, the host of Hand of Pod, a podcast about Argentine soccer, said neither team would be able to declare a clear victory now. “It’s stained,” he said, “Whoever wins now will have the biggest asterisk in history next to their name.”

In fact, fans from both sides have taken to quoting the Boca Juniors legend Juan Román Riquelme, who recently characterized the match that will be played in Spain as “the most expensive friendly in history.”

The fact that Conmebol, the regional soccer body that runs the Copa Libertadores, chose Madrid of all places to play the final of a tournament whose name literally translates to the Liberators of the Americas Cup — named in homage to those who fought for independence from colonial rule — is seen as particularly galling.

“There is just something strange and symbolic that the Copa Libertadores de America is going to the place that colonized America,” said Facundo Ureta, a 35-year-old lawyer.

That disdain for the arrangement extends even to the game’s new site.

“There’s a strong emotional component because it isn’t just in Spain but also in Real Madrid’s stadium, the team that is most closely tied to Spanish royalty,” said Miguel Goyeneche, a 23-year-old Boca Juniors fan. “It’s almost too funny to be true.”

The change of venue and all the back and forth between the soccer authorities “delegitimized the final and a lot of the anticipation we experienced before has now disappeared,” said Fernando Olomudzecki, 28, who works as a guide for an agency that takes tourists to Argentine stadiums and soccer matches.

The main reason tourists are fascinated by Argentine soccer, Olomudzecki said, has to do with the passion with which Argentine fans live the sport. But that is oddly missing now, he said.

“So much of the essence has been lost, we really want to play it and get it over and done with,” Olomudzecki said.

For others, the game’s relocation has prompted soul-searching, and a chance to confront some of the elements — violence, corruption, greed — that have marred South American soccer.

“As a fan, it’s very painful that a cup that is from the Americas has to be played in another continent,” the Boca Juniors fan Sebastián Bustamante said. “As a citizen, I feel like this is a punishment we deserve, because if it didn’t hurt us and we don’t see it as a call to attention, we’re never going to change.”

But Bustamante also spoke to another truth: he made his comments from an airport boarding gate, where he was about to board a flight to Madrid to cheer on Boca. He, and others, said they could not look away now.

“Surely it won’t be the same level of excitement, but we have to win the cup regardless,” said Martín Mathys, a 26-year-old accountant and Boca fan. “In 10 years, few will remember everything that happened, and the only thing that will matter is who won.”