Drama has capped off the final heat of the men’s quarter-finals at Bells Beach, with young Australian Jack Robinson knocking Olympic gold medallist Italo Ferreira out of the tournament after the siren on Saturday.

Ferreira, who defeated Mick Fanning in the 2018 final to win his first title at Bells, took a wave with priority with about 90 seconds to go to try and prevent Robinson from making a come-from-behind claim at the heat.

But Robinson caught a wave at the death, and stood standing as the horn sounded, leaving both surfers with a long wait from the judges. 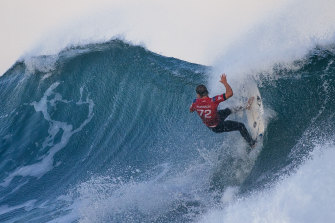 And the decision went Robinson’s way. His score of seven gave him a total of 14, which proved narrowly better than Ferreira’s total of 13.8. Ferreira sought clarity from the judges after the decision, but it didn’t change the result.

“I knew it was one of those moments that you think about or see … these moments are like the finals, they’re clutch moments,” Robinson said post-heat. “I’m just hitting my time. I left it all on the line.” 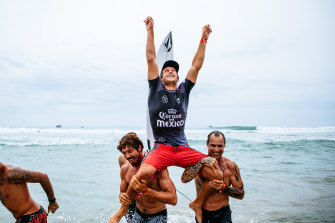 Earlier, birthday boy Filipe Toledo sent John John Florence, one of the Rip Curl Pro favourites, out of the tournament. The pair last did battle at Bells in the final of 2019, where Florence claimed his first Bells title. But Toledo, who had won just one of five career heats against Florence, started the quarter-final with an epic score of 9.63, which made the task all too difficult for his Hawaiian counterpart.

Toledo, 27, described the opening wave as a birthday present sent from God. “I’m pretty sure now about that; I was praying right before my heat to start the heat really well, super strong, and the first wave came and all the prayers were working really good,” the Brazilian said.

“I’m so happy. I beat John, he was the standout at this event. He just had, in my opinion, the heat of the year a few days with Joao [Chianca], so it’s always really good to beat someone like him.

“It’s good to have the nod against him here at Bells, since that final that he won, and now I’m really happy to get that one and move straight into the semis.”

Toledo, who is coming off a runner-up finish in Portugal, now meets Australian Ethan Ewing in the semi-finals after Ewing proved too strong for compatriot Owen Wright. 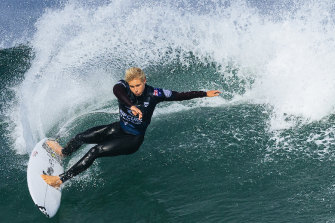 Wright, who had his ankle strapped with tape, was unable to have a significant impact on Saturday, producing a heat best 6.17 from eight waves. Ewing needed just four waves to win, and scored seven or better on all four.

Later, Callum Robson continued his run into the semi-finals, having knocked Fanning out of the tournament in the round of 16, after a nail-biting quarter-final win over Miguel Pupo.

Pupo caught a wave with less than 30 seconds left on the clock and needed a 5.95 or better to win, but was scored at 5.40, to see the Australian progress to meet Robinson in the semis. The quarter-finals did not start until 3pm, with no action in the women’s draw.