The N.B.A. sits poised to be the first American men’s professional sports league to hire a woman as a head coach.

The bond is there, boosted by the league’s growing group of assistants who are women and its siblinglike connection to the W.N.B.A.

The N.B.A.’s players have shown a clear willingness to be led by women. Just ask Michele Roberts, the head of their powerful union.

Job openings are plentiful. There are head coach postings in Orlando, Indiana, Portland and Boston.

This time around, there are women among the candidates, and that’s a sea change not just for the N.B.A. but for all of sport.

It’s bound to happen. If not this year, then hopefully in the next few.

Will a woman running an N.B.A. team from the bench shatter the glass ceiling? Not quite. Not until women are regularly hired for such positions.

More than that, true advancement will come only if trailblazing in the men’s game is just one of many opportunities for women to coach at any level — including college basketball and the W.N.B.A.

Still, think of the powerful message that would be sent by that first N.B.A. hire: The leadership of a billion-dollar franchise and some of the most famous male athletes on the planet entrusted to a woman.

“It would be huge,” Dawn Staley said. “We just need the right situation.”

She has the bona fides to speak up.

Enshrined in the Basketball Hall of Fame after a stellar playing career, Staley, 51, is now the head coach of the U.S. women’s Olympic team and the University of South Carolina women’s basketball team, a perennial power. She is also one of the most prominent Black women in coaching.

“There are a lot of women good enough” to lead an N.B.A. team, Staley said. 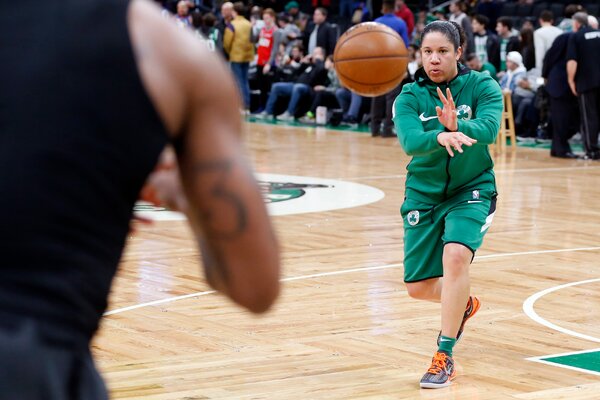 Becky Hammon is one. She’s got insider credentials, having spent several years as Gregg Popovich’s assistant in San Antonio. In the N.B.A., that’s like being at the right hand of God.

Duke’s Kara Lawson is another. She was a favorite of Brad Stevens, the former coach of the Celtics and their current president of basketball operations, during her stint as an assistant in Boston, and is reportedly on the team’s radar.

What about Staley herself? A bold tactician and motivator, she is more than capable of making the leap. That’s why I sought her wisdom.

When we spoke, she made it clear she wasn’t campaigning for an N.B.A. job. She treasures her team at South Carolina, which she has led to three Final Fours since 2015 and a national title in 2017.

“I come with a lot of credentials,” she said. “I surely have the confidence. I surely can stand in front of men and lead them. First-team All-Stars. M.V.P.s. I’m OK with that.”

More than OK, given the firm tone in her voice as she said that.

What about the absence of N.B.A. experience?

It’s a frequent jab when talk of great female coaches helming men’s teams gets too serious — as if there haven’t been plenty of men who have led N.B.A. teams without spending time in the league. (Case in point: Stevens, who took over the Celtics after a coaching career spent entirely in college.)

That common criticism prompted me to wonder what other red herrings could be thrown in the path of a female hire. What will it be like, I asked Staley, for the first woman to break through in the N.B.A.?

The first woman will no doubt have plenty of supporters, she said. But there will also be knuckle-draggers who still believe that no matter what the sport, a woman cannot effectively lead male stars.

Female coaches at every level and in every sport are used to unfair scrutiny of everything from their looks to the way they speak to their strategies. The trailblazing coach will face obstacles that bring to mind those of other “firsts” who broke down barriers in sports.

The city and fan base will also need to be prepared to embrace change — particularly, given the tangle of racism and sexism in America, if the coach is a Black woman.

Being the first has a deep resonance that can spread far and wide, but there’s nuance to the battle for equality that women are fighting on all fronts.

We can take a cue from Staley, who in our conversation noted repeatedly how happy she is at South Carolina. She sees herself in women’s college basketball for the long haul, teaching, cajoling and “getting young women ready to go to the W.N.B.A., so our W.N.B.A. can be around for another 25 years.”

And a cue from the recently retired Muffet McGraw, the other Hall of Famer I spoke with last week.

Women leading N.B.A. teams, she said, is “not something I even care about.”

“I want women coaching women,” she added. When it comes to men’s pro basketball, “I want to see those women going off to the N.B.A. and being great assistants and then coming back and taking over women’s jobs in college and the pros.”

Her candor was no surprise.

In her 33 years of coaching women’s basketball at Notre Dame, McGraw won a pair of national championships and turned her team into a venerable power. She also gained a reputation for speaking out about the need to have women in positions of leadership and for backing it up: As her career evolved, she decided to hire female assistants only.

McGraw pointed out how much work remained to be done. In 1972, at the dawn of Title IX, the landmark law that created a pathway for gender equality on college campuses, 90 percent of the head coaches in women’s college sports were female. Then, slowly but surely, as the fame in women’s sports increased, along with the pay, men began taking over.

By 2019, the numbers had dipped to around 40 percent in the highest division of college sports overall — and around 60 percent in Division I women’s basketball.

It’s hardly better in the W.N.B.A. Despite its reputation as a bastion of empowerment, the 12-team league has only five female head coaches.

There are too few female coaches at all levels and all sports, from elementary age through high school and beyond. “Why is it,” McGraw wondered, “that when your kid goes out to play soccer and they are age 5 and 6, it’s so rare to see someone’s mom coaching the team? And then you get older, it’s almost always a guy. So it’s no wonder that there’s a stereotype in there. You’re led to believe that when you think of a leader you think of a man.

“That has to change.”

Glass ceilings are everywhere for women. Shattering them in men’s professional basketball would be an important start in shattering them all.