Patrick Mouratoglou has guided Williams to nine major championships since linking with the former world No.1 in 2012, but says he has never seen her work as hard in pursuit of a 24th major at Wimbledon this week. 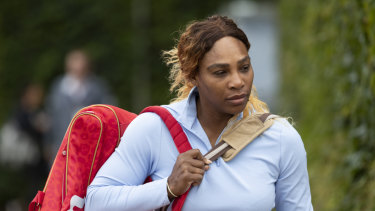 Serena Williams arrives for a practice session at the All England Club.Credit:AP

"She is in a good place at the moment," Mouratoglou said. "She is happy, has a house, her husband is here, her daughter is here and she is pain free.

"In the last match you could see that she has been able to raise her level when it was necessary, which is one of her trademarks and this is back.

"So everything is positive."

Victory over the 54th-ranked Strycova, who, at 33, is the oldest first-time grand slam semi-finalist in 50 years of open-era tennis, would vault Williams into an 11th Wimbledon final on Saturday.

The world No.10 would play either Romanian seventh seed Simona Halep or Ukrainian eighth seed Elina Svitolina, who clash in Thursday's other semi-final.