Steve Smith has confirmed he turned a blind eye to David Warner and Cameron Bancroft discussing a plan to ball tamper in the Newlands change rooms, with the dumped Australian captain saying at the time: "I don’t want to know about it".

Making his first media appearance since his teary confession at Sydney Airport in late March, the banned former Australian captain spoke to reporters at the SCG on Friday afternoon, addressing his role in the ball tampering scandal in South Africa in March. 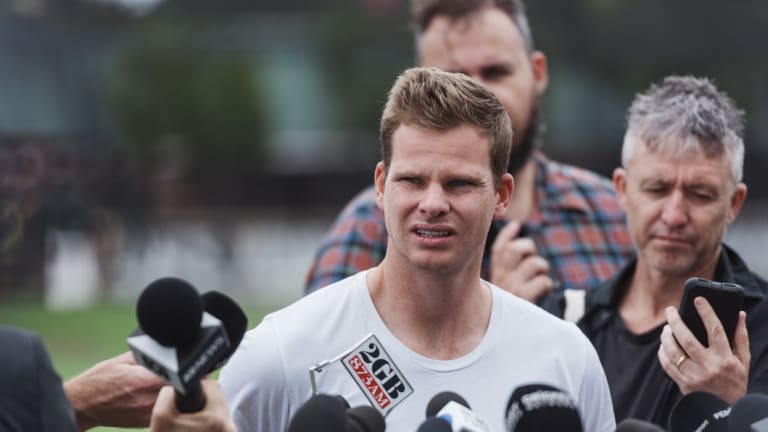 Steve Smith addressed the media at the SCG on Friday afternoon. Credit:James Brickwood

Smith was asked about the infamous lunch break at Newlands on day three of the third Test against South Africa during which a plan was hatched to use sandpaper to alter the condition of the ball.

"It’s been documented pretty heavily what went on," said Smith, who has not spoken about the specifics of the incident before. "In the room I walked past something and had the opportunity to stop it and I didn’t do it and that was my leadership failure. It was a potential for something to happen. It went out and happened on the field. I had the opportunity to stop it rather than say I didn’t want to know anything about it. That was my failure of leadership for that and I have taken responsibility for that.

Asked what he had said when he learnt about the ball tampering plan, Smith replied:

There have been suggestions ball tampering has been widespread in Australian cricket but Smith refuted such claims, saying the events of South Africa were the first time it had happened to his knowledge. 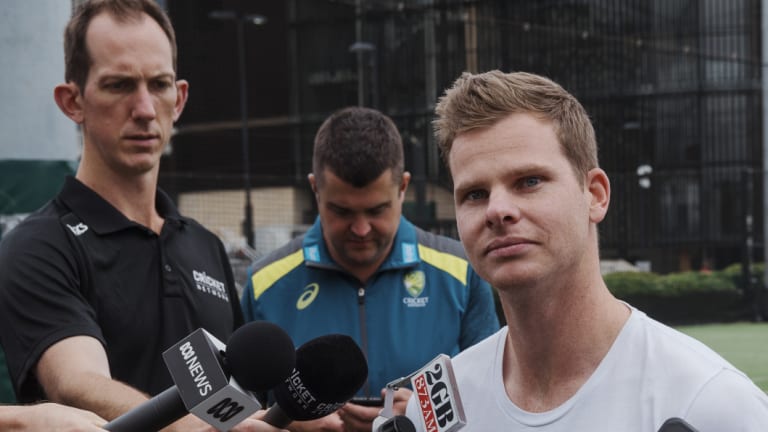 Steve Smith is eligible to return for Australia in March next year. Credit:James Brickwood

"As far as I’m concerned and aware, that was the first time that it had happened," Smith said. "I can’t really judge what other teams around the world do. I know that in any game that you play you want the ball to try and move at some point in the game. You want to do it in a legal way and allow it to play its course that way."

Smith is not eligible to return to state and international cricket until March and is unable to captain again until the end of March in 2020. Asked whether he would like to captain the side again, Smith said it was too early to make a call.

"At the moment I am pretty content with where I am at," Smith said. "[It is] too early to say. We’ll see what the future will hold.

"The next three months is about just preparing as well as I can to hopefully be apart of the World Cup and the Ashes. Tim Paine has done an exceptional job and Aaron Finch taking over the one-day side. He’s had a tough start to that with the performances of the team. If I get back and play under them I will do everything I can to help them out and help Australia have success."

It is understood Smith's relationship with Warner has broken down and there is animosity between the pair but given the chance to address such speculation, Smith insisted that was not the case.

Smith is eyeing off a return for Australia at next year's World Cup and Ashes in the UK but knows it won't be a friendly transition back into the highest level.

"No doubt the English crowd will be incredibly hostile," Smith said. "I’m ready for that if that happens. Nothing is for certain. I will keep working hard and if I get that opportunity again then that will be great.

"I was in a pretty dark space and had some tough days but they are few and far between now."

The 29-year-old, who has been playing club cricket with Sutherland, said it had not been easy watching his Australian teammates from afar in their Test series against India.

"It’s been tough at times, particularly when the boys haven’t played their best in a couple of games and it’s been hard watching and not knowing I can go out and help them," Smith said. "I was really proud of the way the boys played last week in Perth. I thought they were magnificent. I thought Tim Paine’s leadership has been exceptional since taking over as captain. He was faced with difficult circumstances to begin with and he’s done a terrific job. It was an amazing Test match and I’m sure the boys will take a lot of confidence out of the way they played last week."

Asked about the findings of the Longstaff Review, which revealed widespread cultural issues within Australian cricket and at Cricket Australia, Smith said: "I think it’s great that the organisation had an independent review. Any good business around the world does an independent review and it was nice they were able to do that and we’re seeing some changes already. I’m sure there is going to be more changes and it gives the organisation an opportunity to move forward and get better."