Everything I know about soccer could fit on the back of a postage stamp, and still have room left over for the Lord’s Prayer. So, my following remarks must be judged against a concession of profound ignorance on my part on all matters technical. And you will no doubt tell me where I get it wrong.

Yes, it was always likely that the Socceroos were going to lose to the world-champion French team, and if you were mad enough to bet I guess the score of 4-1 to France would have been the most predictable margin.

After all, as the commentators pointed out, when the gulf in class between the two sides has a difference in their collective values to their clubs of over $700 million, victory for the sons of the Southern Cross was always unlikely. 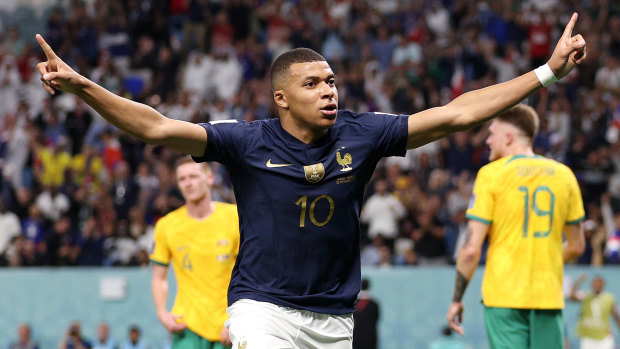 Kylian Mbappe proved too much for the Socceroos too handleCredit:Getty

To my neophyte eyes – and did I mention my profound ignorance? – apart from the first 15 minutes, our blokes looked to be something between tepid and timid, a cross between respectful and reverential of their opponents, but never actually cross?

After the Socceroos’ initial brilliant goal, which came from being right in their faces, not treating the strutting and haughty Gauls respectfully, the next 75 minutes saw us go into what looked like a defensive crouch, even when we fell behind, 2-1, 3-1, and 4-1?

When down 3-1, of course, I accept there was just about no chance of a miracle victory. But is it not obvious that with the backs kicking the ball between themselves and sometimes to our goalie, there was no chance at all? 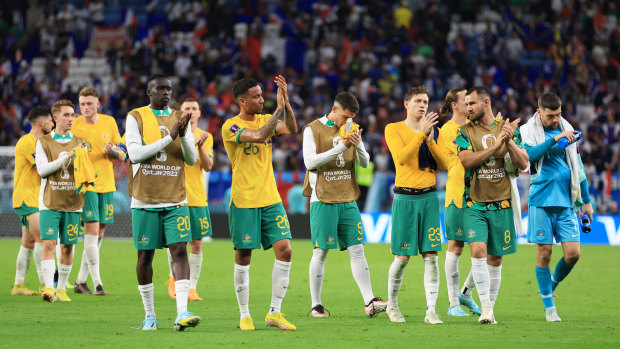 Socceroos players after their loss to France.Credit:Getty

When looking like lambs to the slaughter, isn’t there another way? Wasn’t it time for the call of “Sheepdog!” to go out, as in a version of Tommy Raudonikis’s famous “Cattle dog!” call?

No, not an all-in brawl, but a far more genteel version of that?

Ok, ok, ok. I get that this is not like other football codes, that sheer physicality is not the same kind of trump card in soccer as it is in league, union and Aussie rules. But do you not take my point?

Was there not something to be said for the Socceroos to try, within the bounds of fitness, to put together for 90 minutes, what they had done for the first fifteen minutes?

I submit they displayed the wrong kind of desperation. Instead of being desperate to score come what may, they just seemed desperate to not let France score too much?

Oh, do settle down.

Of course, the Socceroos had already done brilliantly well to get there in the first place. That is not in dispute. And nor is my ignorance, as I keep telling you!

And I state as an indisputable fact that we saw nothing of the kind in that last 75 minutes.

Now, when you send me angry emails, can you CC them to the commentators and former Socceroo greats, Harry Kewell, Craig Foster, Mark Bosnich and John Aloisi, too? Their own remarks towards the end of the match and afterwards – particularly those of Kewell, were very much along the same lines albeit based on actual deep knowledge, not just impressions.

“I just think if we had got them on the back foot,” Kewell said on SBS with a minute to go, “got the back line of France turning, we could have just caused them a little bit more trouble. And it has turned out to be such an easy game for France.”

I had that translated, and to you and me it means indeed pressing forward, taking chances, chancing longer passes to the forwards and trying to get it behind the French defence – precisely as the Socceroos did to nail that first wonderful goal.

In danger of the score blowing out even more?

Yes. All those points, too, are conceded.

Can you concede that it might have worked? (And if not, explain Saudi Arabia’s miracle 2-1 win over mighty Argentina yesterday?)

But at least, if it hadn’t worked, we would have sunk beneath the waves with the turret of our gun still firing and there would be satisfaction enough in that.