No matter who crosses the finish line first at the Daytona 500 on Sunday, it is all but certain what the winning driver will do: stop his car in front of the main grandstands, rev his engine, and then delight the crowd with a smoky burnout as he sends his car spinning in big loops.

“You’re so hyped up after winning that you want to do something destructive,” said Jimmie Johnson, the 2013 Daytona 500 winner.

Victory donuts — as those exuberant, rubber-burning celebrations have come to be known — might be ubiquitous in auto racing now, but they were not common in Nascar until 1998. That is when Dale Earnhardt artfully used his spinning tires to carve a “3”— his car’s famous number — in the grass between the track and the pit lane after his first, and only, Daytona 500 victory.

Two decades later, after Joey Logano won the 2018 season’s final race to clinch his first Monster Energy Cup series title, his celebration was similar: looping donuts with his yellow Ford before and after grabbing a championship flag.

“The big smoky ones, to me, don’t really do it,” Logano said recently. “Anyone can park the car and burn the tires out.”

But although the donut may be the most recognizable postrace tradition for winners, that does nor necessarily mean fast driving translates into beautiful celebratory spins. Jeff Gordon, now a Nascar analyst on Fox, won 93 Cup races during his Hall of Fame career but said he was never all that good at doing postrace donuts — obliging only because fans would have been “let down and disappointed” if he didn’t.

“I remember making some comments about doing my first donut,” Gordon said, “and I don’t think I did a very good one. But I said I saw all these kids doing it, so I’d definitely have to do it, too.” 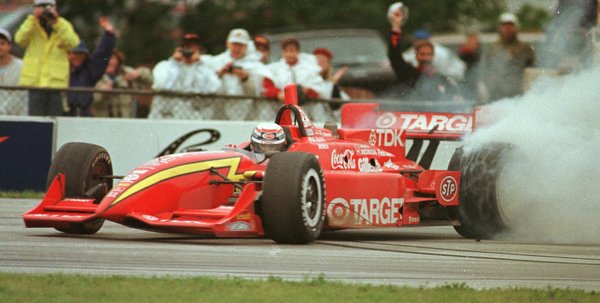 Earnhardt may have popularized the donut in Nascar, but there is a chance it never would have made its way to American racing circles without Alex Zanardi, the Italian who joined the now-defunct Championship Auto Racing Teams open-wheel series in 1996.

Zanardi, who came from Formula One, started out in the pole position each of his first two races in his second year in CART but finished out of the top three in both. In the third race, on a street course in Long Beach, Calif., Zanardi started second but passed Jimmy Vasser with 12 laps left and held on to win.

After the victory, he took his car to Turn 1 and whipped his car around in a donut.

“It was basically a fantastic way to start the season, and I was so happy,” Zanardi said in a recent interview, adding: “People made a big thing out of it, like, ‘Wow, yeah, he’s spinning donuts!’ So they encouraged me to do it again.

“It wasn’t long before fans would call me Mr. Donut, Donut King, and so on. People would start to show up with a case of doughnuts.”

But CART officials were not as enthused, telling Zanardi to cool it with the donuts out of safety concerns for reporters and photographers near the track. His peers did not immediately fall in love with the celebration, either.

Zanardi said: “Other drivers would say: ‘I’d never do something like that. Come on. That is beyond the limit. It’s dangerous, and it’s showing off too much. Be happy with your race win you just earned.’ ”

So he held off on the donuts after back-to-back victories in Michigan and Ohio, but picked it back up after a third win, in Wisconsin, en route to his first CART title.

The donut came to Nascar courtesy of the veteran driver Ron Hornaday Jr., who executed them in the Craftsman Truck Series in 1995. They were not appreciated by the truck’s owner, Earnhardt, who thought it was too hard on the transmission. Earnhardt, who died in a crash at Daytona in 2001, told Hornaday to knock it off, but the idea, it seems, grew on him until he was willing to use it himself.

Johnson, a seven-time Monster Energy Cup Series champion, has become something of an expert on donuts simply because of how often he has won. His favorite donuts, he said, are those by the former Cup driver Greg Biffle and the 28-year-old Logano, who has won 21 Cup races and “is pretty cool to watch” doing donuts, Johnson said.

Zanardi, who lost his legs in a crash in Germany in 2001, said it was not all that difficult to do a good burnout and donut on a car with a standard transmission: Put the car in gear, he said, let out the clutch “quite brutally” so the wheels start to spin, and then turn the steering wheel as the tires spin to twirl the car around.

Johnson discovered the hard way that the best method was to put the car in second gear before spinning the wheels. After his first Cup victory in 2002 in Fontana, Calif., Johnson tried doing celebratory donuts, at a high cost to his Chevrolet.

“At first, we had this discussion where we wanted to do a burnout in reverse,” Johnson said after the race. “And I tried that, and I blew the transmission out of it. And then I was doing the donuts and I burned the motor up.

“So it was just a bad last five minutes there on the racetrack, but I wanted to do some donuts and boil the tires off this Chevrolet.”

Zanardi, 52, has won four gold medals in paracycling at the Paralympics, and in January raced a specially fitted BMW in the Rolex 24, a 24-hour endurance auto race, at Daytona. He said he could have used a traction-control button on his steering wheel to do a donut if his team had won, but, unfortunately for Zanardi and fans of donuts, it did not.

While still known as the godfather of the donut, Zanardi finds some amusement in his unusual role in racing history.

“I didn’t invent anything,” he said. “Of course, I have an ego. When somebody points out that I was the first one to do something like this, yes, there’s a small reason for pride. But I’d be much happier if people still believed it was a stupid thing to do — and I’d have another opportunity to do it.”