ARSENAL really, really need the points and West Ham will see this as a free-hit and hope no key players get injured.

Logic therefore says Arsenal – but how often does a derby follow logic? 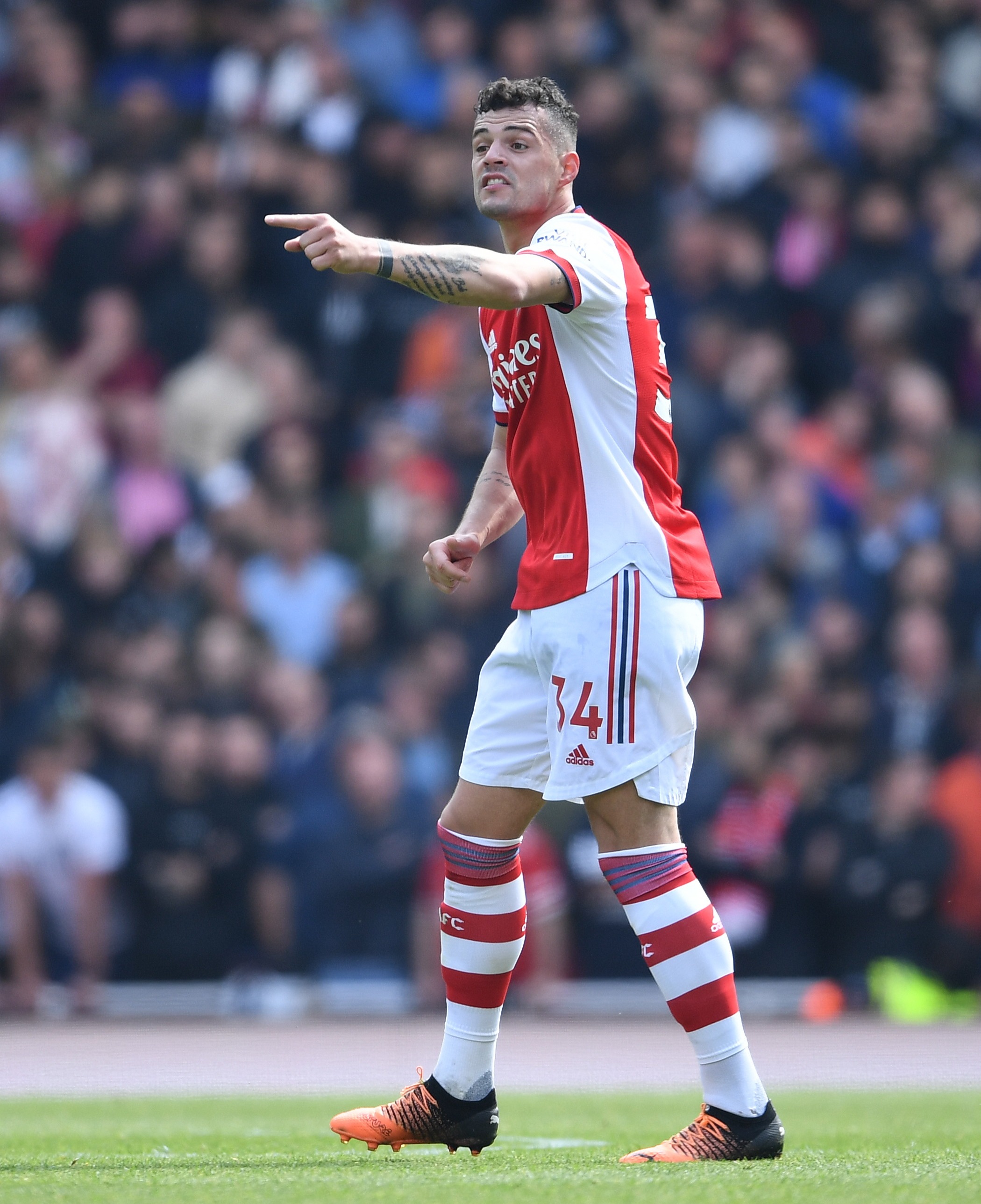 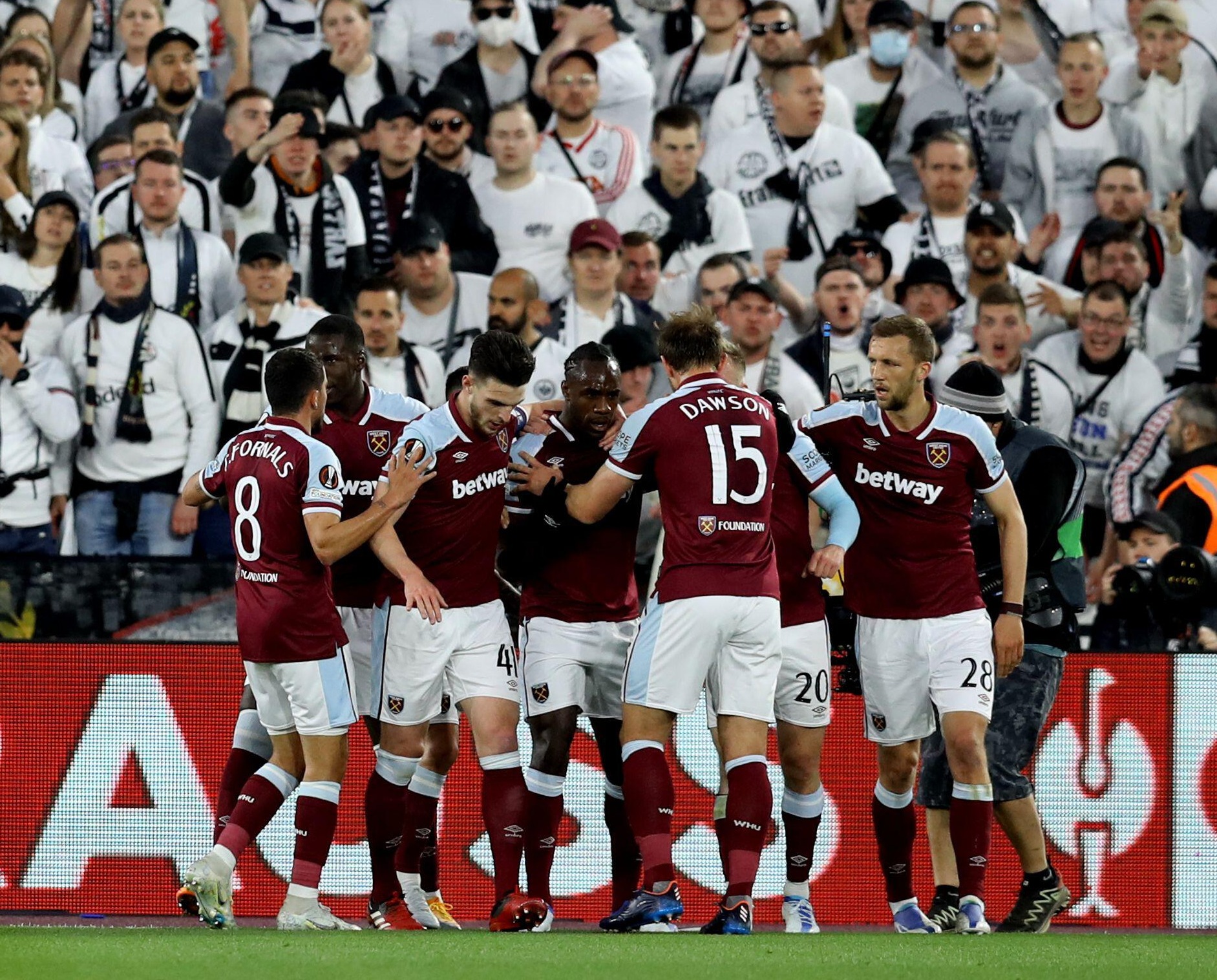 Watch out for Arsenal trying to encourage West Ham to come out and play a bit.

But also, don’t be surprised when West Ham try and keep the ball as often as possible too.

Right now, you would be hard pressed to find a more impressive manager than David Moyes of West Ham.

Take a minute to let that sink in, yes, that Moyes. 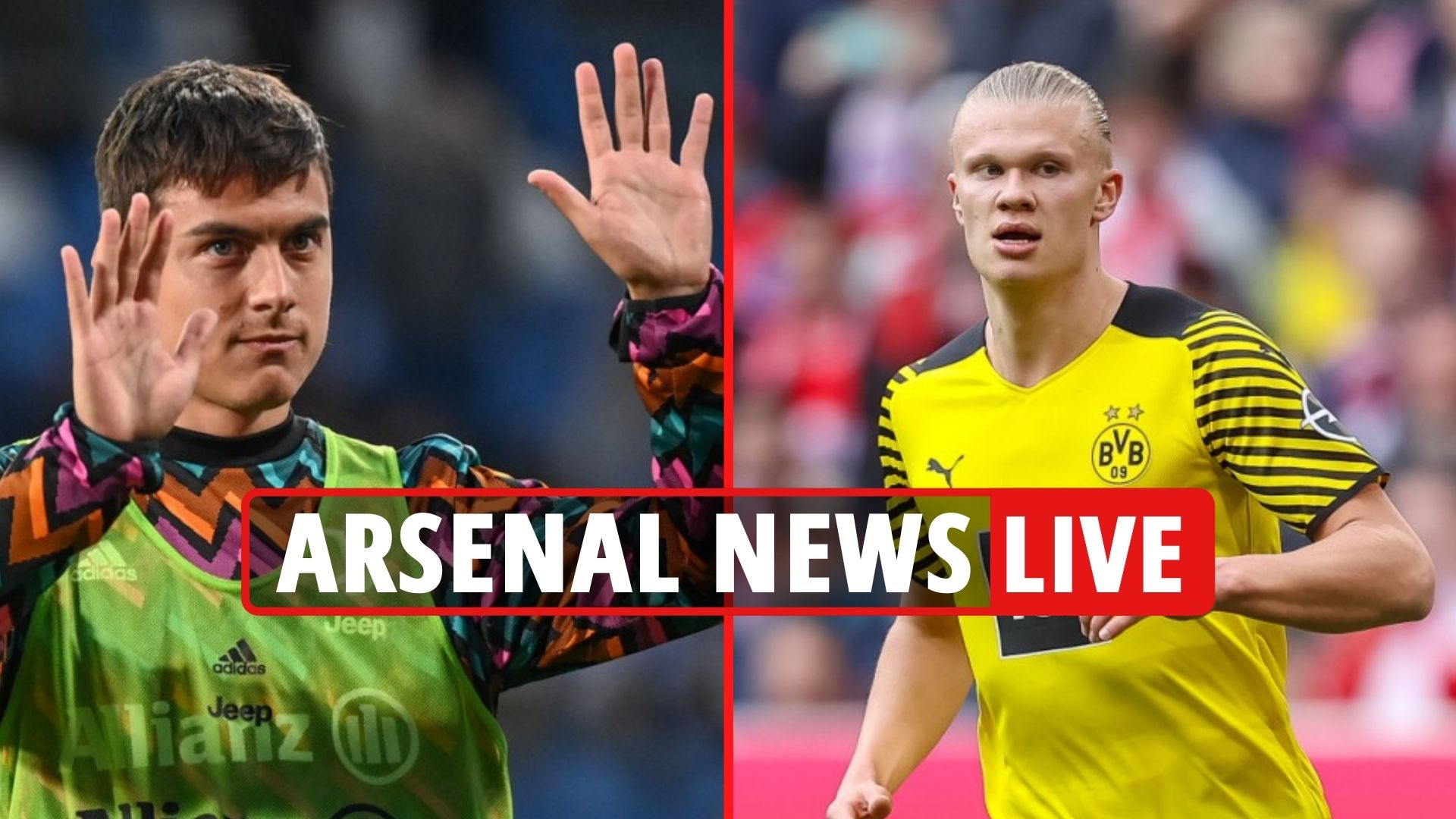 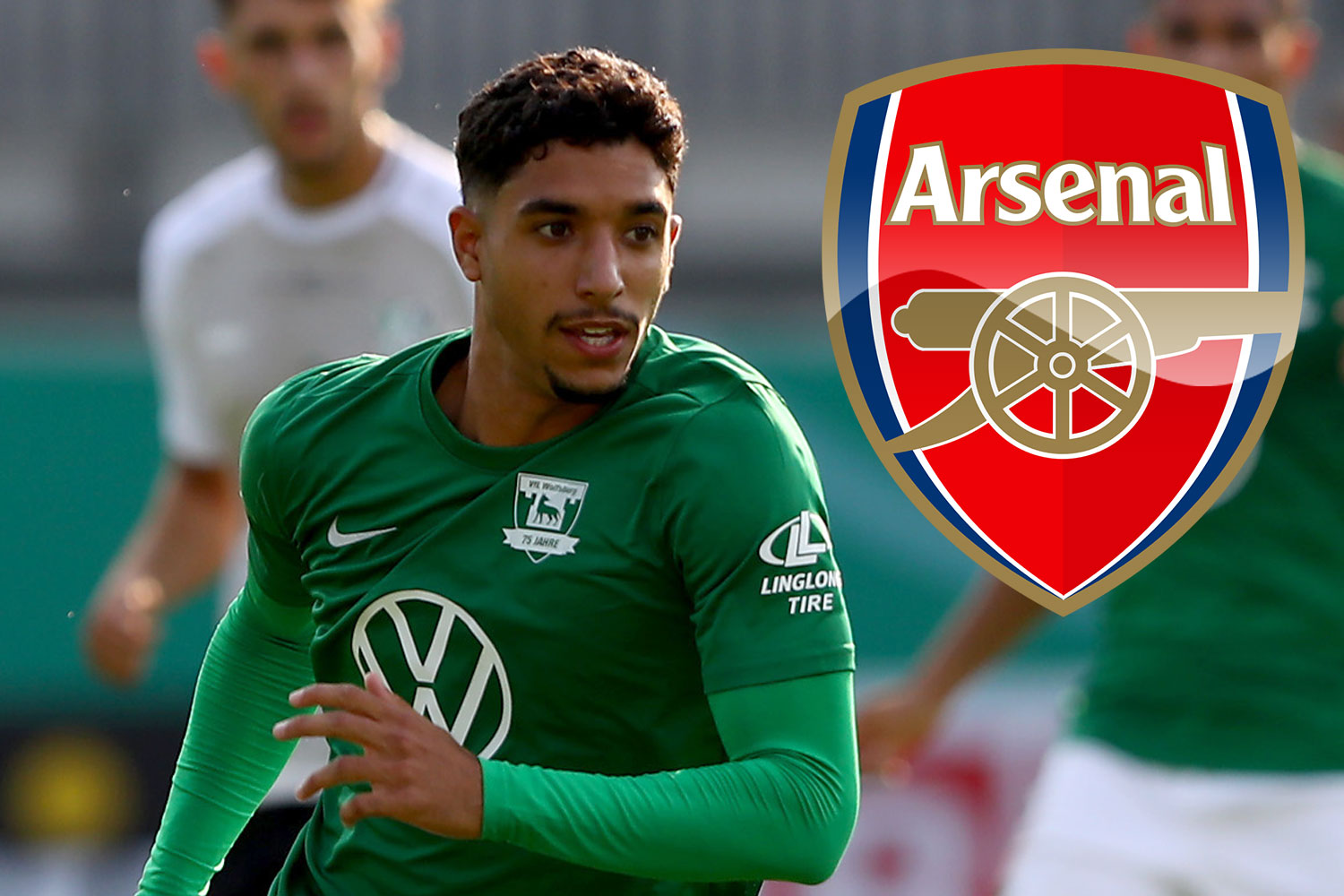 It’s unlikely that even the most optimistic West Ham fans saw this coming when the club appointed the Scotsman in December 2019 as the club are competing in a European semi-final while also sitting 7th in the Premier League table.

Have the dissenters gone quiet? You’d think so.

Now that we are at the business end of the season, we are going to find out if the West Ham squad is big enough to handle the congested fixture list.

The games are coming thick and this weekend sees West Ham host Mikel Arteta and his impressive Arsenal side.

Arsenal come into this match off the back of wins over Chelsea and Manchester United as they close in on a top-four finish and a return to the Champions League.

So, what about the probable tactics?

West Ham aren’t afraid to not have the ball

While in the match against Chelsea there was a degree of squad rotation from West Ham as they shuffled their team with one eye on the semi-final against Eintracht Frankfurt we saw a very compact and well structured display.

There was a change of base system, we would normally expect to see West Ham play in something approaching a 4-2-3-1 system but against Chelsea it was a 3-4-3, the key thing, however, was that West Ham were comfortable to allow Chelsea to have possession while they defended in a compact unit.

This shape from West Ham when they were out of possession effectively make it difficult for Chelsea to find any space between the lines into which they could play the ball. 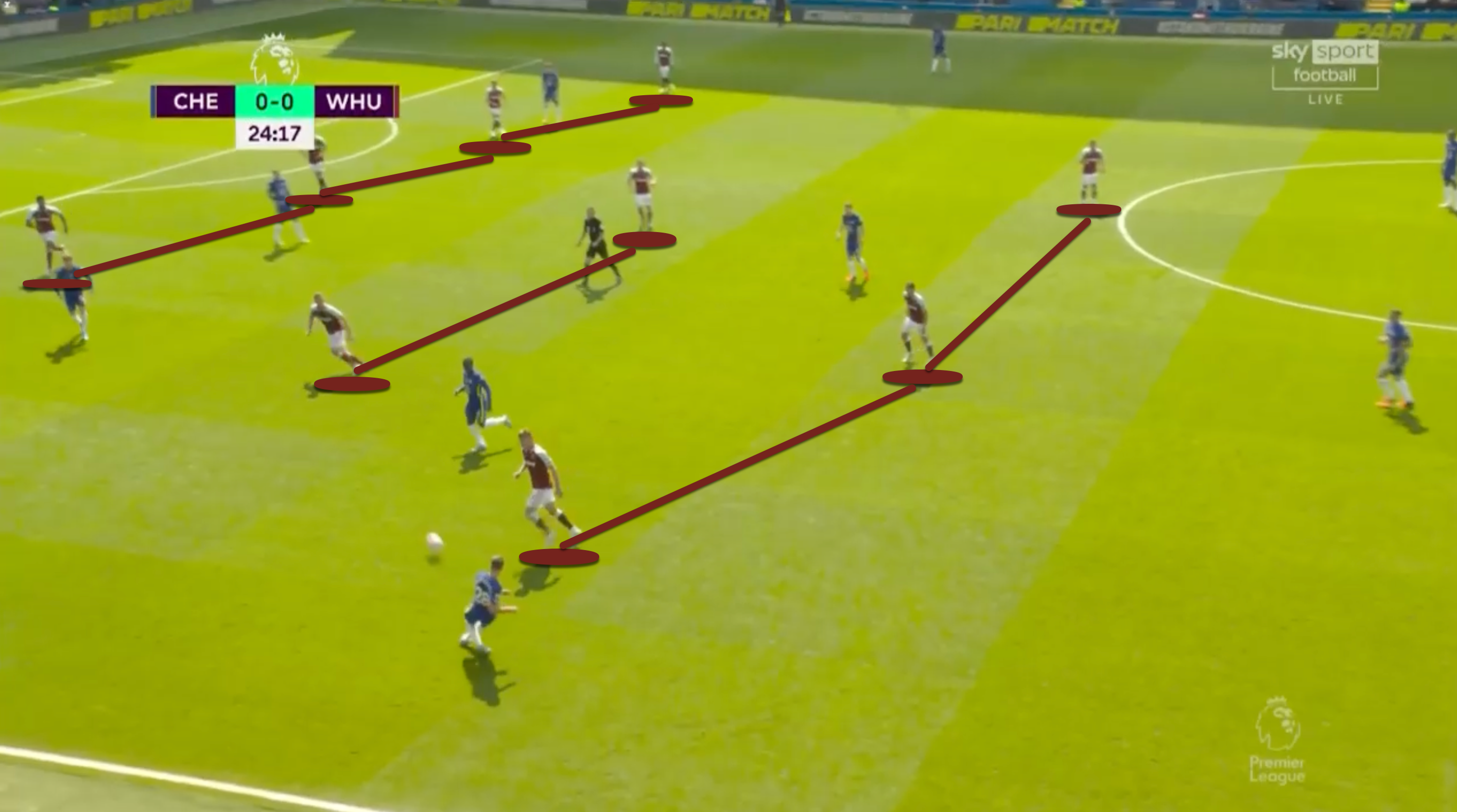 This left Chelsea trying to play passes that were covered or into areas in which the ball could be contested by the West Ham defenders and midfielders.

This defensive compactness has been a feature of West Ham’s game whether they have lined up in a three man or four man defensive system.

Their work against the ball is helped, of course, by the fact that we are likely to see a midfield structure of Declan Rice and Tomas Soucek (unless Moyes is thinking a lot about Thursday) in a double pivot.

Both are extremely versatile in terms of their roles with the ability to receive and play through the thirds, make forward runs to support the attack, and hold deeper positions in order to prevent the opposition from playing through. 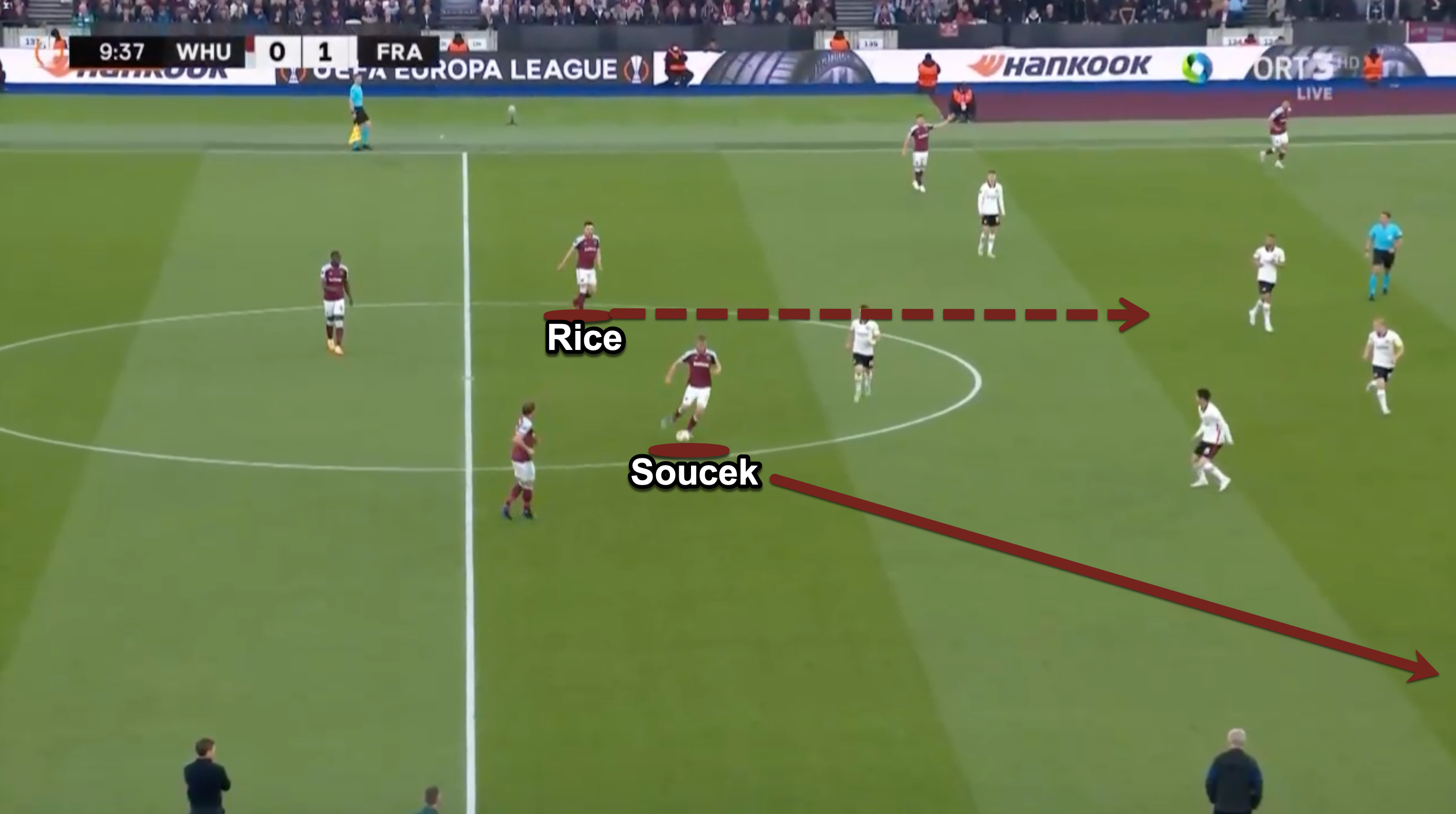 Arsenal will try to pull West Ham out

When Mikel Arteta first took charge of Arsenal he was adamant that his side would play out from the back.

Given that he took over the squad build by Unai Emery, the players were not quite at the level needed to be able to do this effectively.

This led to some comedy moments and Arsenal fans were becoming more and more frustrated with their team and this very deliberate system of play.

Fast forward to today and thanks to some impressive coaching and even more impressive recruitment Arsenal are one of the few teams in the Premier League who can rival Manchester City when it comes to playing out from the back. Yeah, that’s right – Man City.

This is going to be an important part of this game with West Ham, as we have already discussed, likely to sit in a compact block and challenge Arsenal to break them down.

By playing out from the back and probably slowing down their tempo slightly we will see Arsenal try to tempt the West Ham forwards to come out and close them down.

If the West Ham players do so then spaces will be created that Arsenal can play into. 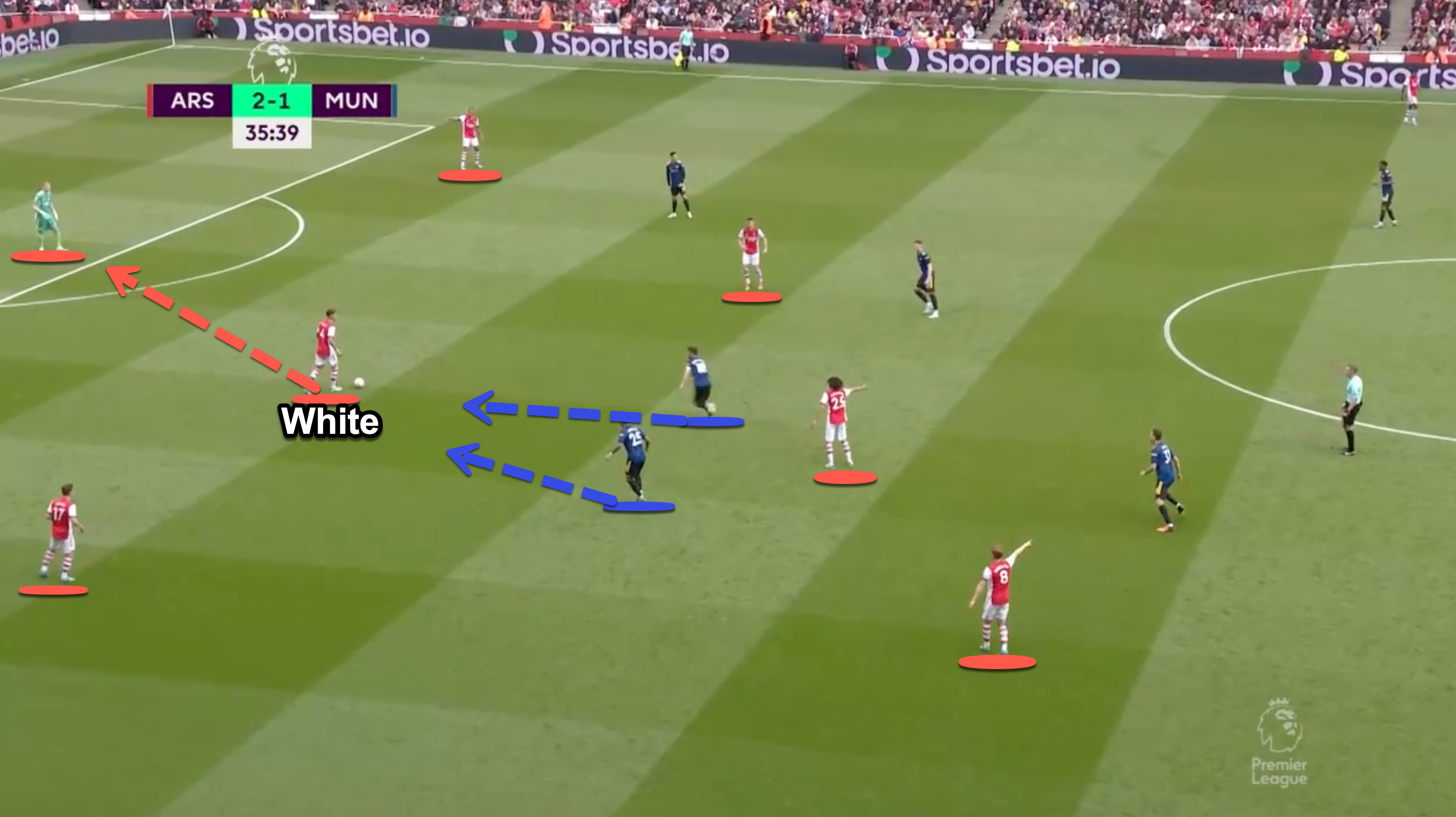 Arsenal are interesting in this area because they find so many different ways to build out from the back.

The likes of Takehiro Tomiyasu, when fit, and Granit Xhaka in particular are important because they can drop into the defensive line to form a line of three.

This lets the ball move across the line as Arsenal look for opportunities to play through the pressure of the opposition. 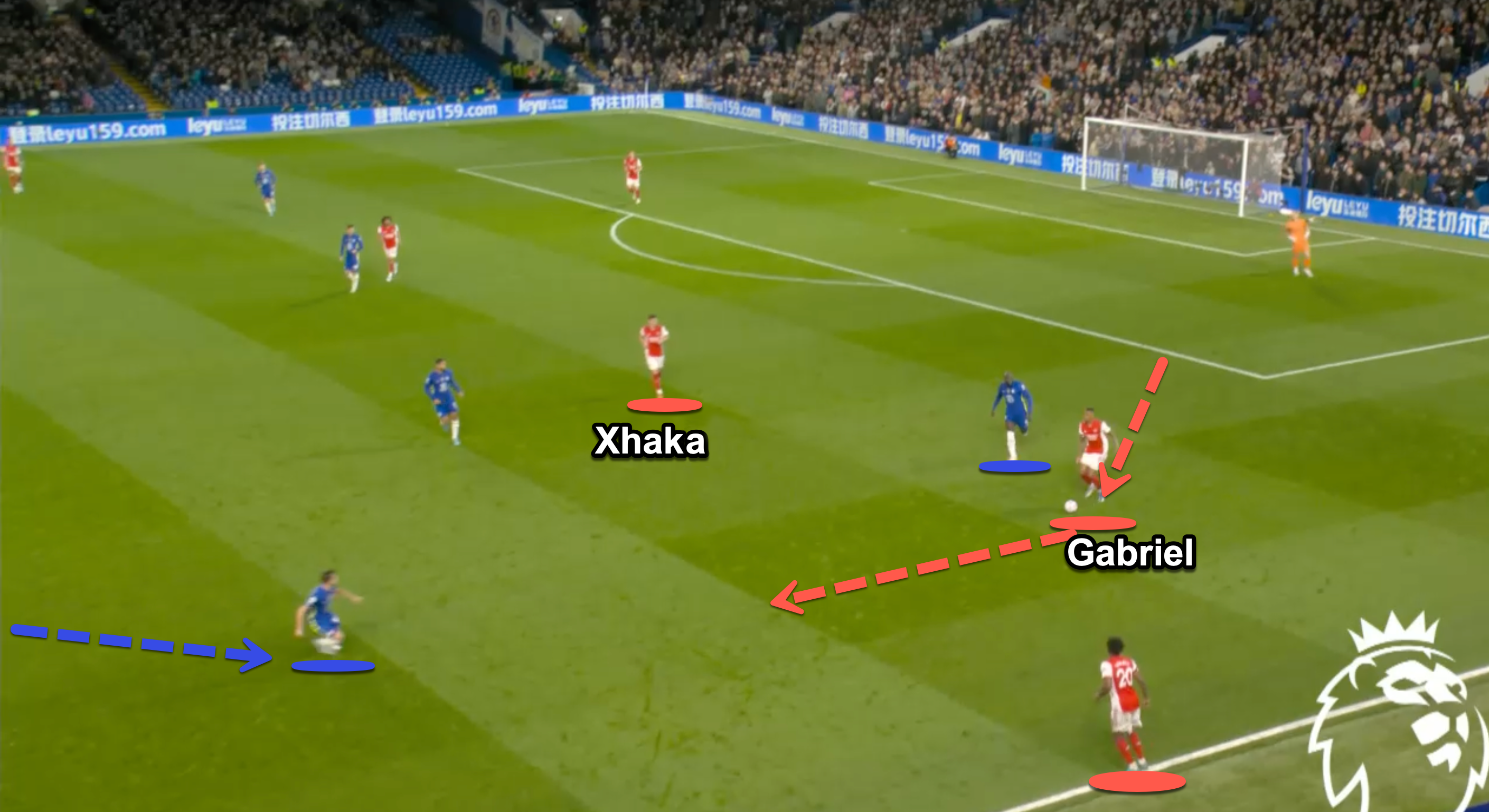 Arsenal have a huge attacking threat

If teaching Arsenal to build out from the back has been an impressive coaching achievement from Arteta it pales in comparison to the fact that he has made them dangerous in front of goal.

Their attacking threat has been hugely enhanced by the partnership that has been created on the right-hand side of the pitch by Bukayo Saka, at right-wing, and Martin Odegaard, as the right-sided central midfielder.

Those two are incredibly technical players with a real creative streak.

This has led to Arsenal’s chance creation being much better and this has been highlighted in the recent resurgence of Eddie Nketiah whose two goals against Man Utd were key to Arsenal winning that match. 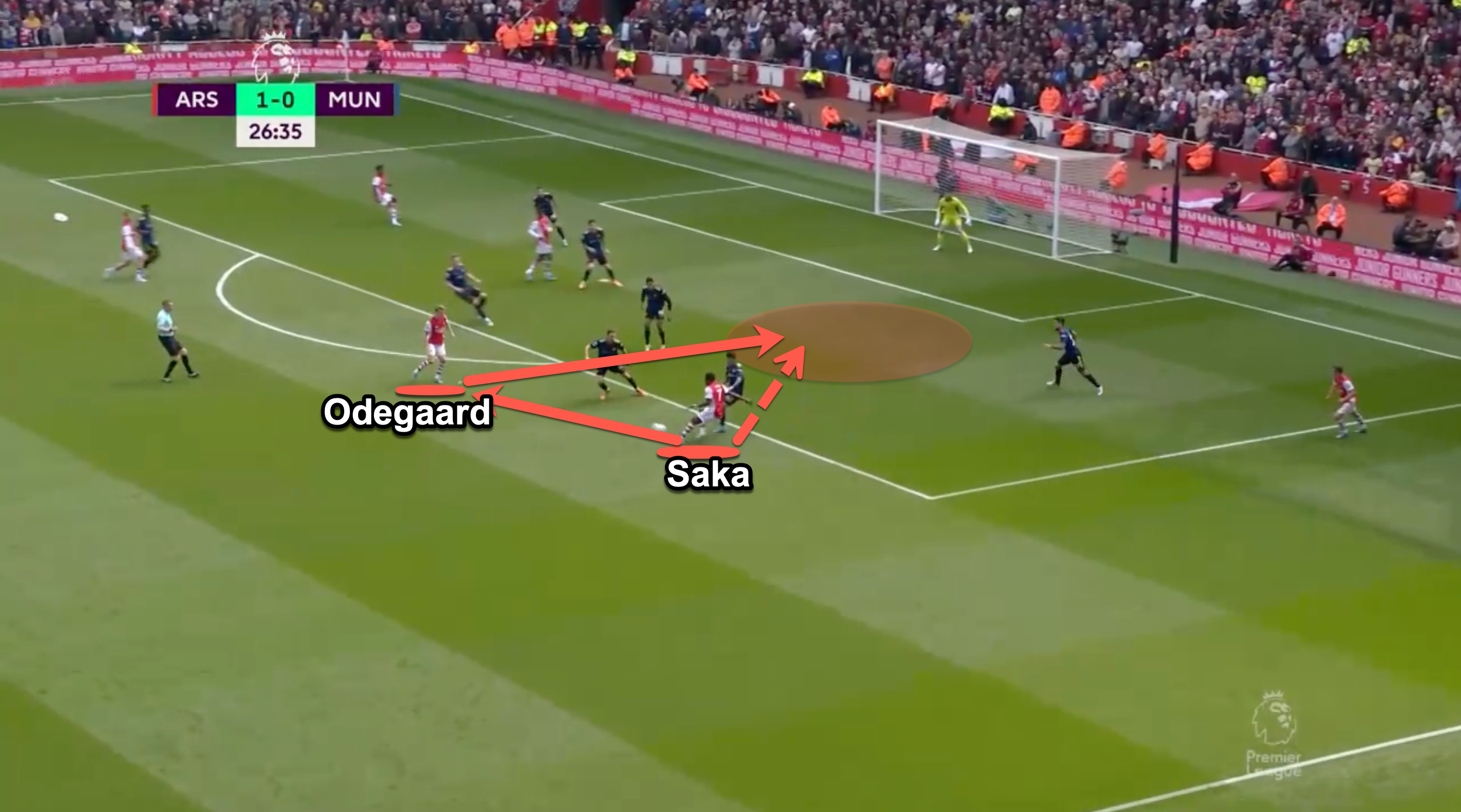 With Saka able to come inside on his left-foot he often has angles to play into Odegaard and this leads to creative passing patterns from Arsenal.

The fact that Arsenal play a midfield three will mean that the double pivot in the midfield for West Ham will have to be at the top of their game to prevent them from breaking through. 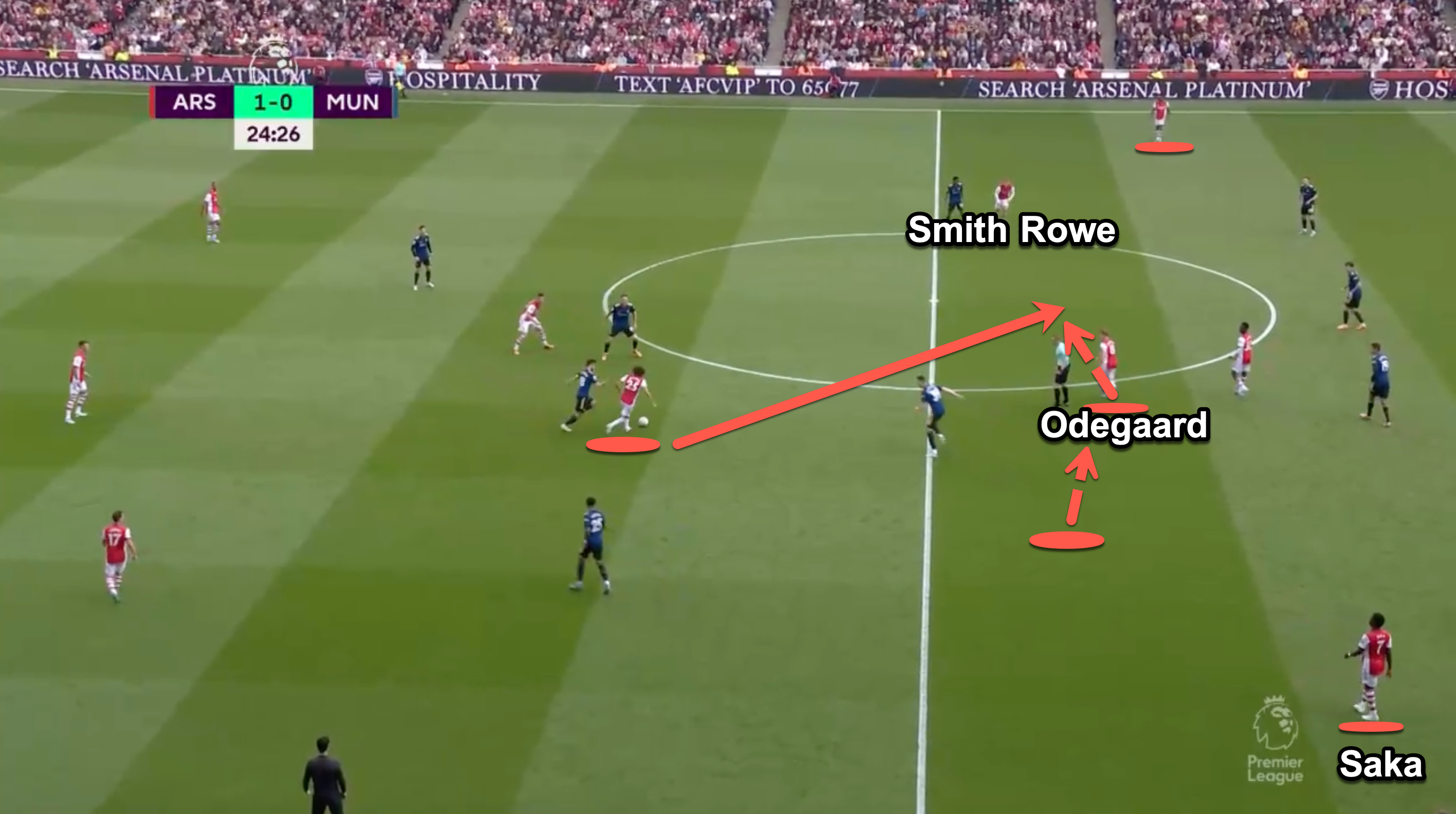 Odegaard is a creative and intelligent midfielder and he will take advantage of any lapses in concentration from the two midfield players for West Ham.

His ability to drift into space to receive the ball and then turn and attack the opposition defensive line has been incredibly important for Arsenal this season and he will have to be watched closely by the West Ham midfield.

So, how will it play out?

As we said, West Ham will sit in but then be brave on the ball when they get it.

Arsenal will do whatever they can to entice the Hammers out and then look to unleash those attacking players as soon as possible.

So much depends on what side Moyes opts for – it would be no great surprise to see Antonio, Rice and one of the other more creative attackers given the afternoon off.

It would have to be a draw. The likely West Ham starting XI against an Arsenal side desperate for the points to keep pushing for 4th?

Arsenal have lost games like that before, haven’t they?

For more tactical analysis, scouting and stunning data visuals head over to Total Football Analysis – check out their monthly digital magazine which features 22 top articles in the May edition.